A stroll along Nicholas Street in
the heart of mediaeval Limerick 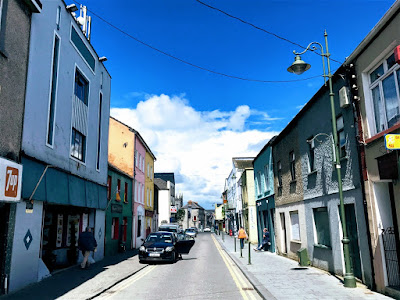 Nicholas Street was once the High Street of mediaeval Limerick (Photograph: Patrick Comerford, 2017)

Thousands of tourists visit the castle each month, and Nicholas Street, despite its apparent neglect, has obvious tourist potential, for this was once the historic and cultural centre of Limerick.

Nicholas Street was the principal street in the heart of the walled city and it dates back to the foundations of Limerick. The street, with its proximity to the quays, King John’s Castle and Saint Mary’s Cathedral made it the centre of civic life in mediaeval Limerick.

Nicholas Street runs from the northern end of Nicholas Street, near the Parade at the north end, just south of King John’s Castle, to Mary Street at the southern end, near Baal’s Bridge.

The former Thomond Cinema, now Stix, stands on the site of Saint Nicholas’s Church in the heart of mediaeval Limerick (Photograph: Patrick Comerford, 2017)

The street was named after Saint Nicholas of Myra, better known to children today as Santa Claus. In the mediaeval era, Saint Nicholas was revered as the proctor and patron saint of sailors and seafarers. Here, as in many mediaeval ports, his name was given to a church close to the quays and berthing facilities.

Nicholas Street and the streets off it fell into a progressive decline in the late 19th and early 20th centuries. Much of Nicholas Street was rebuilt in the mid-20th century, but it still follows the lines of the mediaeval terrace plots, so that the houses with their modest scale fit perfectly with the mediaeval urban grain of Englishtown.

Limerick City and County Council has plans to invest more than €700,000 in the street this year, with the hope of bring back to life several derelict units on the street. Other mediaeval cities, such as Kilkenny and Waterford, have realised the positive tourist potential of such sites.

Waterford has its Viking Triangle, while Kilkenny has its Mediaeval Mile. But similar plans for Limerick have been delayed in the past because of the discovery of several mediaeval remains along Nicholas Street.

During demolition work in the 1990s, a significant mediaeval fireplace feature and stone corbels were found on the site of Nos 36-39 Nicholas Street. This site stands at the corner of Nicholas Street and Peter Street, and is now known locally as ‘The Fireplace Site.’ A protective canopy was placed around the entire structure to shield it from the weather as expert stonemasons engaged in the intricate and delicate work of restoring the fireplace and the surrounding structure.

The wall is situated between what were probably two stone mediaeval houses dating back to the late 15th century. In addition, the site retains remnants of the long narrow properties of mediaeval burgage plots, with an average width of five metres. Test trenching on the site has revealed further underlying archaeological deposits and a cellar feature.

Human bones, two sherds of mediaeval pottery and one piece of post-mediaeval pottery were also found on Nicholas Street at the entrance to the Widows’ Almshouses. Archaeologists believe the bones may have come from the graveyard attached to Saint Nicholas’s Church, the mediaeval parish church that stood on the south side of the castle.

Mediaeval Limerick had two distinct parishes, Saint Nicholas’s and Saint Mary’s, until they were amalgamated.

Records from the 1400 say the vicarage of the parish church of Saint Nicholas belonged to the vicars choral of Saint Mary’s Cathedral, giving them the right to nominate the vicar.

According to the local historian and antiquarian, Thomas Johnson Westropp (1860-1922), Saint Nicholas’s Church ‘was in good repair in 1615.’ The church was apparently ‘destroyed’ during the sieges of Limerick, in either 1642 or 1651.

No traces of this church exist, although local lore says it stood on the site of the former Thomond Cinema, now housing a business known as Stix – I wondered whether this was an abbreviation of Saint Nick’s or Saint Nicholas.

The churchyard extended as far as the site of the Widows’ Almshouses, which add significantly to the architectural and historical importance of King’s Island. The almshouses were built after the Siege of Limerick in 1691, probably in the early 1700s. By then, the graveyard was no longer in use, and its presence may have been forgotten.

The Widows’ Almshouses were originally built to house the widows and families of soldiers once garrisoned in the castle. The exterior of the almshouses is 19th century in character. This terrace of five, three-bay, two-storey limestone almshouses, was restored in 1970 and renovated by Limerick Corporation in 1993. They remain an intact terrace of houses and are part of the history of King John’s Castle.

From Nicholas Street, I walked on further past King John’s Castle to see the Bishop’s Palace, Saint Munchin’s Church and Villiers Almshouses. But these are stories for other days. 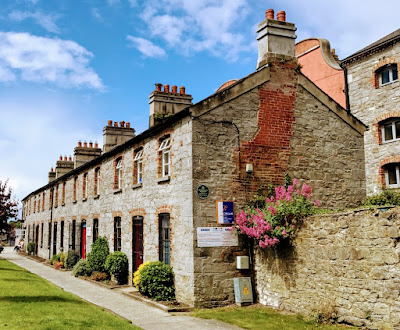 The former Widows’ Almshouses date from the late 1600s or early 1700s, and stand on part of the churchyards attached to Saint Nicholas’s Church (Photograph: Patrick Comerford, 2017)

Posted by Patrick Comerford at 20:34

Very interesting. Thank you. I love this street, it is as interesting as any medieval centre in Europe.