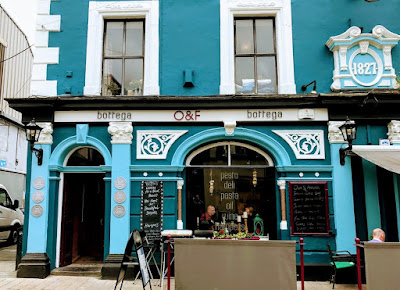 I was writing yesterday about the way the streets of Limerick are richly laden with fine example of 19th and early 20th century stucco work, and I wrote how one exuberant example of this stucco work is found at the Mechanics Institute on Hartstonge Street.

Two further examples of this stucco work can be seen in the O&F Bottega at Nos 2 and 3 Little Catherine Street, on the corner with Limerick Lane, and the Athenaeum on Cecil Street.

Olio e Farina, where I had lunch last week, is housed in a substantial pair of buildings on a narrow street in the heart of Limerick. These two buildings, with a unique classically-inspired stucco composition, are unified by the elaborate yet curious façade treatment and a large gable and decorative shopfront, so that these premises add to the architectural interest of this part of the city centre. 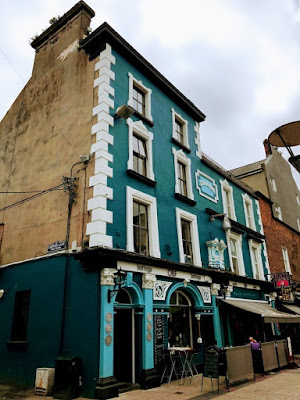 There is a pitched natural slate roof to the four-storey section, with a large dormer inserted to the front and the rear. There is a heavy parapet entablature to the four-storey elevation with a pair of console brackets to both side elevations and a substantial rendered chimney-stack with a cornice.

The roof of the three-storey section is hidden behind the parapet wall with a cast-iron railing and a stringcourse below. The painted rendered walls to the front elevation have quoins at either end, and plain render to the side and rear. 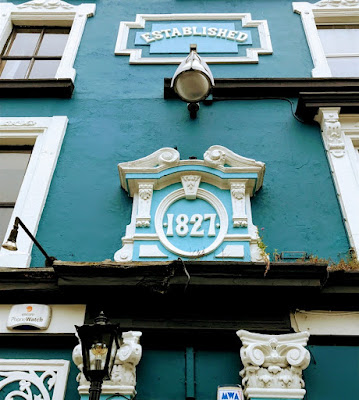 The rendered panel on the second floor between both structures has the word ‘Established,’ which relates to the plaque with the date ‘1827’ above the shopfront.

The square-headed window openings have decorative stuccoed surrounds, moulded sills and a profiled rendered sill course to the second floor of the three-bay section, with replacement aluminium windows throughout.

The painted rendered elaborate shopfront of both sections comprises five pilasters on plinth bases with composite capitals and cornice above. Between the second central pilasters is the recessed panel with the elaborate date plaque above the cornice. There is an arched fixed-pane window with an architrave surround and a scrolled keystone and a pair of polished granite colonnettes with capitals.

The round-headed door opening has a pyramidal keystone architrave surround and a double-leaf timber-panelled door. This arrangement was presumably repeated on the three-storey section but has since been removed and replaced by a modern timber shopfront. 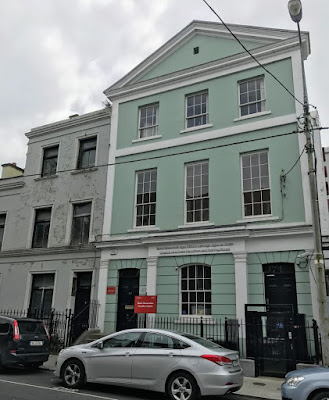 The Athenaeum Building is a classical pedimented stuccoed building dating from the 1830s (Photograph: Patrick Comerford, 2017)

On Cecil Street, the Athenaeum Building is a classical pedimented stuccoed building, built to the designs of John Fogerty, county engineer, as the headquarters of Saint Michael’s Parish Commissioners.

The building designed by John Fogarty in 1833-1834 as the offices of Saint Michael’s Parish Commissioners and served as the town hall for Newtown Pery for 20 years until 1854. It is designed in a restrained manner, without excessive detailing to distract from its pleasant classical proportions.

The name Athenaeum, also spelled Athenæum or Atheneum, is used for many institutions of literary, scientific, or artistic study, and is derived from Athena, the Greek goddess of arts and wisdom.

John Wilson Croker founded the Athenaeum Club in London in 1823, beginning an international movement for the promotion of literary and scientific learning. Croker came from a family with strong connections with Co Limerick, and other founder members of his club included William Blake, Robert Peel, Lord John Russell, Sir Walter Scott, Michael Faraday, William M. Turner, and others. The club published a literary and scientific journal, The Athenaeum, which continued until 1921.

The Athenaeum movement spread throughout the world. In England, similarly named clubs were founded in Bristol, Leeds, London, and Manchester. In Ireland, the Cork Athenaeum was built by public subscription in 1853, and later became the Cork Opera House. Dublin had an Athenaeum at 43 Grafton Street in 1856, and there is still an Athenaeum in Enniscorthy, Co Wexford.

One of the first subscribers to the Limerick Athenaeum was Sir Richard Bourke, Governor of New South Wales in Australia. The building at No 2 Upper Cecil Street was bought from Limerick Corporation in February 1855, and work began on its conversion to a public lecture theatre, school of art and library.

It reopened on 3 December 1855 with classes provided by the School of Ornamental Art. The new Athenaeum Hall, which was built beside the original building, opened to the public on 3 January 1856, with the first Annual General Meeting of the Athenaeum Society. It was described as the ‘finest hall for its special purposes, in Ireland.’ Natural light came from three domes in the high roof, and it had an orchestra gallery and seating for up to 600 people.

The building was both a lecture hall and a theatre, intended for both entertainment and education. The first show = in January 1856, was a multimedia panorama show of the Crimean War. Many of the leading international theatrical figures performed in the Athenaeum in the years that followed, including: Catherine Hayes, the Limerick-born diva, who gave a benefit performance of Handel’s Messiah; General Tom Thumb and PT Barnum; Percy French; and Count John McCormack.

Many of Limerick’s leading sporting clubs were founded in the rooms of the Athenaeum, including Limerick Boat Club (1870), Garryowen Football Club (1884) and Limerick Golf Club (1891).

The lecture hall was then leased out by the Technical Education Committee and the Athenaeum Hall began to double as a theatre and cinema in the early 1900s, reopening as the Athenaeum Permanent Picturedrome.

When Juno and the Paycock an Alfred Hitchcock adaption of Seán O’Casey’s play, was shown in October 1930, it had only one showing when members of the Limerick Confraternity raided the projection box and stole two reels of the film which were later burnt outside the cinema by a mob of at least 20 men in Cecil Street.

With the outbreak of World War II, the tenants surrendered the lease in 1941, and despite sporadic openings over the next few years, the last films were shown in the Athenaeum Cinema in November 1946.

The new Royal Cinema opened on 17 November 1947. The last film was screened at the cinema in 1985. The dereliction of the old Athenaeum continued until 1989, when it was bought by a local businessman who had hopes of opening a new theatre.

Many of the architectural features of the original hall were carefully restored, including the three ceiling domes. Performers included Mary Black, and – after a fire and further renovations – the Cranberries, the Corrs, Boyzone, Dolores Keane, Sharon Shannon, Don Baker, Paul Brady, Davy Spillane, Liam Ó Maonlaí, Julian Lloyd Webber and the Saw Doctors. A sequence of Father Ted was filmed in the theatre in 1995. Despite the relative success of the venue, however, the Theatre Royal closed for the last time in 1998.

The original Athenaeum Building was used as a school from the 1940s to the 1960s and was known in Limerick as the ‘One Day’ Boys School. In 1973, the City VEC moved from O’Connell Street to the Athenaeum, and a refurbishment programme was completed in 2003.

Today, the Athenaeum still stands as the focal point of Cecil Street, and with the theatre it has an important place in this part of Georgian Limerick. 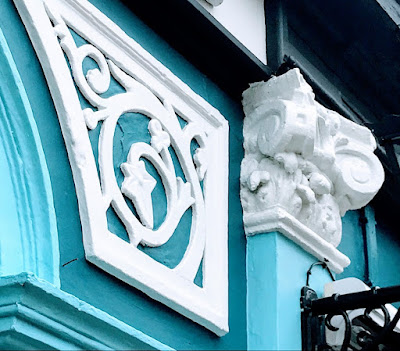