Thackeray was taken aback by his first impressions when he arrived by boat at the quays in Limerick (Photograph: Patrick Comerford, 2017; click on image for full-screen view)

I was naturally drawn to the war poets Robert Graves and Siegfried Sassoon when I was writing about Limerick’s literary connections in recent days. Both poets were stationed in Limerick 100 years ago, were strongly critical in their work of modern warfare, and wrote affectionately of Saint Mary’s Cathedral, Limerick.

Robert Graves was a grandson of Bishop Charles Graves of Limerick, and visited his grave in the cathedral churchyard; Siegfried Sassoon found that ‘by the time I had been at Limerick a week I had found something closely resembling peace of mind,’ and later recalled the ‘bells tolling from Limerick Cathedral; much nicer than sirens from Bryant and May’s factory.’

A very different writer who had a very different impression of Limerick and of Saint Mary’s Cathedral was the 19th century English novelist, William Makepeace Thackeray (1811-1863).

Thackeray was famous for his satirical works, particularly Vanity Fair, a panoramic portrait of English society. During the Victorian era, he was ranked second only to Charles Dickens, although he is much less widely read today.

In Thackeray’s day, some commentators including Anthony Trollope ranked his History of Henry Esmond as his greatest work, perhaps because it expressed Victorian values of duty and earnestness, as did some of his other later novels.

The Luck of Barry Lyndon (1844) tells of the exploits of a fictional 18th century Irish adventurer. It was filmed as Barry Lyndon by Stanley Kubrick in 1975, starring Ryan O’Neal, Marisa Berenson, Patrick Magee and Hardy Krüger, with many of the scenes shot on location in Ireland.

In the 1840s, Thackeray had some success with two travel books, The Paris Sketch Book and The Irish Sketch Book (1843). His Irish travel book appealed to British prejudices of the day, and landed Thackeray the position of Punch’s Irish expert, often under the pseudonym Hibernis Hibernior. In this role, Thackeray was chiefly responsible for Punch’s hostile and condescending depictions of the Irish during the Great Famine.

Thackeray had spent four months travelling around Ireland in 1842 and wrote an account of his journey in The Irish Sketch Book, which remains one of the most detailed and colourful surveys of Irish hotels ever written.

In Limerick, he stayed at ‘one of the best inns in Ireland - the large, neat, and prosperous one kept by Mr Cruise.’ This was the Royal Mail Coach Hotel or Cruise’s Hotel. There He was delighted to meet the proprietor, which he claimed was a rare occurrence in Ireland where hoteliers ‘commonly (and very naturally) prefer riding with the hounds, or manly sports, to attendance on their guests.’ 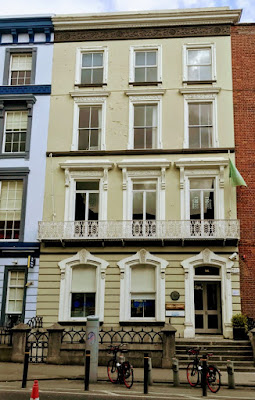 ‘The great street of Limerick is altogether a very brilliant and animated sight’ (Photograph: Patrick Comerford, 2017)

He was overcome by the sight of King George’s Street (now O’Connell Street): ‘The houses are bright red – the street is full and gay, carriages and cars in plenty go jingling by – dragoons in red are every now and then clattering up the street, and as upon every car which passes with ladies in it you are sure (I don’t know how it is) to see a pretty one, the great street of Limerick is altogether a very brilliant and animated sight.’

However, his first impressions soon faded: ‘But even this mile-long street does not, in a few minutes, appear to be so wealthy and prosperous as it shows at first glance: for of the population that throngs the streets, two-fifths are bare-footed women, and two-fifths more ragged men: and the most part of the shops which have a grand show with them, appear when looked into, to be no better than they should be, being empty make-shift looking places, with their best goods outside.’

He contrasted the lives he saw on the streets of Limerick: ‘Here, in this handsome street too, is a handsome club-house, with plenty of idlers you may be sure, lolling at the portico; likewise you see numerous young officers, with very tight waists and absurd brass shell-epaulettes to their little absurd brass shell epaulettes to their little absurd frock coats, walking the pavement – the dandies of the street. Then you behold troops of pear, apple and plum women, selling very raw, green looking fruit, which indeed, it is a wonder that anyone should eat and live.’ 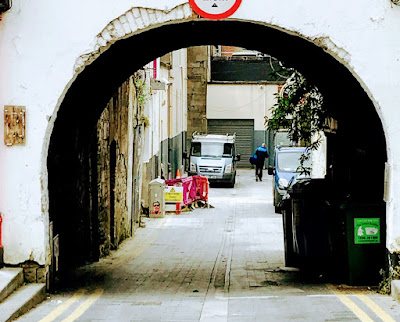 Thackeray wrote disparagingly of ‘the nasty streets’ and ‘the still more nasty back lanes’ of Limerick (Photograph: Patrick Comerford, 2017)

In Irishtown, Thackeray witnessed a different side of Limerick, and wrote of ‘a labyrinth of busy swarming poverty and squalid commerce as never was seen … Here every house almost was half a ruin and swarming with people.’

He wrote: ‘Look out of the nasty streets into the still more nasty back lanes; there they are, sprawling at every door and court, paddling in every puddle; and in about a fair proportion to every six children an old woman – a very old, blear-eyed, ragged woman – who makes believe to sell something out of a basket, and is perpetually calling upon the name of the Lord … In these crowded streets, where all are beggars, the beggary is but small: only the very old and hideous venture to ask for a penny, otherwise the competition would be too great.’

As he crossed the river, he noticed Barrington’s Hospital, which he described as ‘a handsome hospital.’ But he was not at all impressed by Saint Mary’s Cathedral nearby. He described it as ‘the old cathedral, a barbarous old turreted edifice – of the fourteenth century it is said: how different to the sumptuous elegance which characterises the English and continental churches of the same period.’

Some years after visiting Limerick, Thackeray caused offence with his comic song ‘The Battle of Limerick,’ which trivialises the Young Ireland movement and mocks and mimics Irish accents – although William Carleton remarked that he ‘writes very well about Ireland, for an Englishman.’

At the height of Young Ireland activities in 1848, the Confederate leaders, William Smith O’Brien and Thomas Francis Meagher, proposed to make a tour of the main towns of Munster to review the local Repealers. The tour began at Limerick, where a soirée was held on 29 April. But the presence among the guests of John Mitchel, who had recently given offence by an attack on the memory of Daniel O’Connell, inflamed the mob, and in the fray which ensued O’Brien was struck by a man who had failed to recognise him.

The Battle of Limerick, by William Makepeace Thackeray

Ye Genii of the nation,
Who look with veneration,
And Ireland’s desolation onsaysingly deplore;
Ye sons of General Jackson,
Who thrample on the Saxon,
Attend to the thransaction upon Shannon shore.

When William, Duke of Schumbug,
A tyrant and a humbug,
With cannon and with thunder on our city bore,
Our fortitude and valliance
Insthructed his battalions
To rispict the galliant Irish upon Shannon shore.

Since that capitulation,
No city in this nation
So grand a reputation could boast before,
As Limerick prodigious,
That stands with quays and bridges,
And the ships up to the windies of the Shannon shore.

A chief of ancient line,
’Tis William Smith O’Brine,
Reprisints this darling Limerick, this ten years or more:
O the Saxons can’t endure
To see him on the flure,
And thrimble at the Cicero from Shannon shore!

This valiant son of Mars
Had been to visit Par’s
That land of Revolution, that grows the tricolor;
And to welcome his returrn
From pilgrimages furren,
We invited him to tay on the Shannon shore!

Then we summoned to our board
Young Meagher of the Sword;
’Tis he will sheathe that battle-axe in Saxon gore:
And Mitchil of Belfast
We bade to our repast,
To dthrink a dish of coffee on the Shannon shore.

Convaniently to hould
These patriots so bould,
We tuck the opportunity of Tim Doolan’s store;
And with ornamints and banners
(As becomes gintale good manners)
We made the lovliest tay-room upon Shannon shore.

Sure the Imperor of Bohay
Would be proud to dthrink the tay
That Misthress Biddy Rooney for O’Brine did pour,
And, since the days of Strongbow,
There never was such Congo –
Mitchil dthrank six quarts of it – by Shannon shore.

But Clarndon and Corry
Connellan beheld this sworry
With rage and imulation in their black heart’s core;
And they hired a gang of ruffins
To interrupt the muffins
And the fragrance of the Congo on the Shannon shore.

When full of tay and cake,
O’Brine began to spake;
But juice a one could hear him, for a sudden roar
Of a ragamuffin rout
Began to yell and shout,
And frighten the propriety of Shannon shore.

As Smith O’Brine harangued,
They batthered and they banged;
Tim Doolan’s doors and windies down they tore;
They smashed the lovely windies
(Hung with muslin from the Indies),
Purshuing of their shindies upon Shannon shore.

With throwing of brickbats,
Drowned puppies and dead rats,
These ruffin democrats themselves did lower;
Tin kettles, rotten eggs,
Cabbage-stalks, and wooden legs,
They flung among the patriots of Shannon Shore.

O the girls began to scrame
And upset the milk and crame;
And the honourable gintlemen, they cursed and swore:
And Mitchil of Belfast,
’Twas he that looked aghast,
When they roasted him in effigy by Shannon shore.

O the lovely tay was spilt
On that day of Ireland’s guilt;
Says Jack Mitchil, “I am kilt! Boys, where’s the back door?
’Tis a national disgrace:
Let me go and veil me face;”
And he boulted with quick pace from the Shannon shore.

“Cut down the bloody horde!”
Says Meagher of the Sword,
“This conduct would disgrace any blackamore;”
But the best use Tommy made
Of his famous battle blade
Was to cut his own stick from the Shannon shore.

Immortal Smith O’Brine
Was raging like a line;
’Twould have done your sowl good to have heard him roar;
In his glory he arose,
And he rush’d upon his foes,
But they hit him on the nose by the Shannon shore.

Then the Futt and the Dthragoons
In squadthrons and platoons,
With their music playing chunes, down upon us bore;
And they bate the rattatoo,
But the Peelers came in view,
And ended the shaloo on the Shannon shore.