A new challenge facing
the new Primus in Scotland 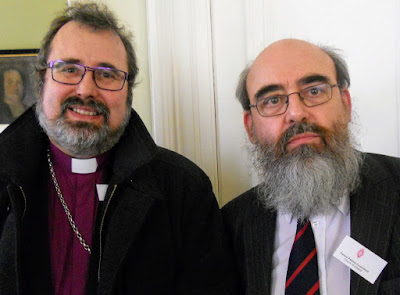 With Bishop Mark Strange at a recent conference in Edinburgh

Bishop Mark Jeremy Strange, the Bishop of Moray, Ross and Caithness, became the Primus of the Scottish Episcopal Church this week. He was elected at an Episcopal Synod in Edinburgh on Tuesday [27 June 2017] in succession to the Most Revd David Chillingworth, who was born in Dublin and who stepped down this month after eight years in office.

Bishop Strange was born in 1961, and studied theology at the University of Aberdeen and Lincoln Theological College. He was ordained deacon in 1989 and priest in 1990. After serving as a curate and a vicar in the Diocese of Worcester, he returned to Scotland in 1998 and was elected Bishop of Moray, Ross and Caithness in 2007.

After his election as Primus this week, Bishop Strange said: ‘I am humbled by the confidence shown in me by my colleagues and I will seek to serve the church as Primus with love and strength.’

Bishop Mark is married to Jane – a teacher in Inverness – and they have a son and two daughters.

His election comes immediately after the General Synod of the Scottish Episcopal Church voted to permit same-sex marriage. The vote earlier this month amended canon law on marriage, removing the stipulation that it is between a man and a woman.

His election also came days before today’s planned consecration by a group of objectors of Canon Andy Lines as a ‘missionary bishop’ for Europe. Andy Lines is the chief executive of the mission agency Crosslinks, which fundraises using images of poverty in Africa yet uses funds raised in Ireland to organise and support conferences on debates that are internal to the Anglican Communion, including sexuality.

Gafcon said the decision to appoint Andy Lines was a ‘missionary bishop’ came in response to the vote in the Scottish general synod. But the response and the decision had been prepared weeks in advance.

Gafcon said: ‘This consecration comes in the context of a global reformation that is happening in the Anglican Communion. While Anglican provinces such as the Episcopal Church (USA), Anglican Church of Canada, and Scottish Episcopal Church are rejecting the authority of the Bible, faithful Anglicans are uniting through Gafcon to proclaim and defend the unchanging truth in a changing world.’

Archbishop Justin Welby of Canterbury has written to all other Anglican Primates warning them about Andy Lines’s appointment. But Archbishop Glenn Davies of Sydney, Bishop Richard Condie of Tas¬mania, and other Gafcon bishops are expected to take part in today’s illicit consecration.

It must come as a surprise to some while they say Andy Lines is a ‘missionary bishop’ for Europe, the event is taking place in the Edman Chapel at Wheaton College in Illinois. It has echoes of the furtive consecrations of ‘wandering bishops’ or episcopi vagantes.

As for Wheaton College, it is not an Anglican foundation and it is not open to the normal standards of academic inquiry. It requires its teaching staff to affirm a belief in an historical Adam and Eve, although they can teach animal evolution. Two years ago, Wheaton disciplined Professor Larycia Hawkins, who agreed with Pope Francis Christians and Muslims worship the same God, and she subsequently resigned.

The people taking part in today’s consecration described themselves as ‘conservative evangelicals.’ But it is hard to see how they can be described as either when they neither want to conserve or value Anglican traditions, nor want to prioritise mission over confrontation.