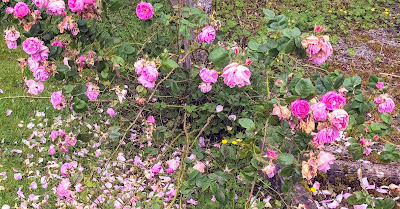 I was in Holy Trinity Church, Rathkeale, twice this week, celebrating the Festal Eucharist and preaching on Trinity Sunday [11 June 2017], and again on Monday [12 June 2017], after visiting Rathkeale No 2 National School, meeting the staff and pupils and speaking at the school assembly.

As I walked around Holy Trinity churchyard in Rathkeale, the yew trees were standing tall, and this year’s roses were losing their petals, which are collecting on the ground beside some of the graves.

Some of the gravestones are covered in moss and lichen and the inscriptions are fading, others have cracked or are broken, and some are crumbling into the ground.

The churchyard is well maintained, the grass is mowed regularly, the trees are chopped back, and the graves have been mapped. But the carving on many of the gravestones is no longer legible. Some of the graves are railed off, but the railing is rusting and inside the graves are overgrown. Even the once majestic tombs, with their heraldic carvings, are showing their years, their centuries.

I have long agreed it is appropriate for a priest to be buried in a churchyard, and this is a most appropriate churchyard for any priest who has served this parish. Traditionally, people are buried facing east, while priests in churchyards are buried facing west, perhaps in the understanding or hope that at the resurrection of the dead we should face our people. 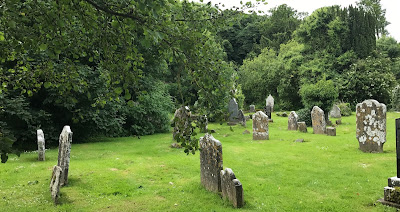 Walking through the graves, the falling rose petals, and the tall evergreen yews, beneath ‘yonder ivy-mantled tow’r,’ I was reminded of Thomas Gray’s Elegy Written in a Country Churchyard, a poem I had once learned by heart as a schoolboy and that could have been set in a churchyard like this, and described parishioners like those of Rathkeale in the past.

Here ‘the rude forefathers … sleep,’ here are the ‘boast of heraldry, the pomp of pow’r.’

Perhaps in this neglected spot is laid
Some heart once pregnant with celestial fire;
Hands, that the rod of empire might have sway’d,
Or wak’d to ecstasy the living lyre.

Some mute inglorious Milton here may rest,
Some Cromwell guiltless of his country’s blood.

Gray’s Elegy has been described as ‘probably still today the best-known and best-loved poem in English.’ It was written in 1750 and published in 1751, and was partly inspired by the death of the poet Richard West in 1742. It was completed when Gray was living near Saint Giles’s Church in Stoke Poges, about 5 km north of Slough in Buckinghamshire.

The poem embodies a meditation on death, and remembrance after death. It argues that this remembrance can be good and bad, and he finds comfort in pondering the lives of the obscure rustic people buried in the churchyard. The final version includes an epitaph that represses his fear of dying.

This poem opens in a churchyard with the narrator describing his surroundings in vivid detail. He emphasises the sensations he hears and sees as he examines the area in relation to himself.

As the poem continues, he begins to focus less on the countryside and more on his immediate surroundings. His descriptions move from sensations to his own thoughts as he begins to emphasise what is not present in the scene; he contrasts an obscure country life with a life that is remembered. This contemplation provokes the narrator's thoughts on the natural process of wastage and unfulfilled potential.

He focuses on the inequities that come from death, obscuring individuals, while he begins to resign himself to his own inevitable fate. As the poem ends, he begins to deal with death in a direct manner as he discusses how humans desire to be remembered. The first narrator is replaced by a second who describes the death of the first.

An epitaph is included after the end of the poem. This reveals that the poet whose grave is the focus of the poem was unknown and obscure. Circumstance kept him from becoming something greater, and he was separated from others because he was unable to join in the common affairs of their life.

The Elegy provoked a response from the 19th century Romantic poets, who often attempted to define their own beliefs in reaction to the poem. Percy Bysshe Shelley, for example, wrote his own meditation among the graves in 1815. His A Summer Evening Churchyard, Lechlade, Gloucestershire resembles Gray’s setting, but concludes that there is something appealing in death that frees it of terror.

Alfred, Lord Tennyson adopted many features of the Elegy in his own extended meditation on death, In Memoriam, echoing Gray’s narrator reading the tombstones to connect to the dead.

Robert Browning relied on a similar setting to the Elegy in his poem Love Among the Ruins, which describes how everything ends in death. But Browning adds a female figure and argues that nothing but love matters.

Thomas Hardy, who memorised Gray’s Elegy, took the title of his fourth novel, Far from the Madding Crowd (1874), from a line in the poem. Many of the poems in his Wessex Poems and Other Verses (1898) include graveyard themes.

It is said that parts of TS Eliot’s Four Quartets are derived from the Elegy. Eliot’s village is similar to Gray’s hamlet, there are many echoes of Gray’s language throughout the Four Quartets, both poets rely on the yew tree as an image and both use the word ‘twittering,’ which was not in common use at the time.

Each of Eliot’s four poems has parallels to Gray’s poem, and Little Gidding is deeply indebted to the Elegy’s meditation on a ‘neglected spot.’ There is a strong parallel in Eliot’s reuse of Gray’s image of ‘stillness,’ an image that is essential to the poem’s arguments on mortality and society. 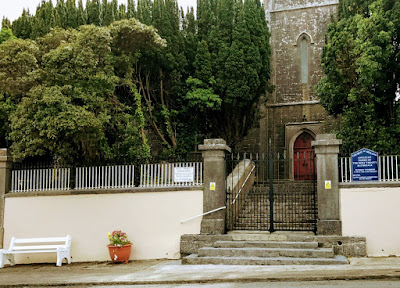 The freshly-painted walls at the churchyard and Holy Trinity Church, Rathkeale, on the day after Trinity Sunday (Photograph: Patrick Comerford, 2017)

Elegy Written in a Country Churchyard, by Thomas Gray

The curfew tolls the knell of parting day,
The lowing herd wind slowly o’er the lea,
The plowman homeward plods his weary way,
And leaves the world to darkness and to me.

Now fades the glimm’ring landscape on the sight,
And all the air a solemn stillness holds,
Save where the beetle wheels his droning flight,
And drowsy tinklings lull the distant folds;

Save that from yonder ivy-mantled tow’r
The moping owl does to the moon complain
Of such, as wand’ring near her secret bow’r,
Molest her ancient solitary reign.

Beneath those rugged elms, that yew-tree’s shade,
Where heaves the turf in many a mould’ring heap,
Each in his narrow cell for ever laid,
The rude forefathers of the hamlet sleep.

The breezy call of incense-breathing Morn,
The swallow twitt’ring from the straw-built shed,
The cock’s shrill clarion, or the echoing horn,
No more shall rouse them from their lowly bed.

For them no more the blazing hearth shall burn,
Or busy housewife ply her evening care:
No children run to lisp their sire’s return,
Or climb his knees the envied kiss to share.

Oft did the harvest to their sickle yield,
Their furrow oft the stubborn glebe has broke;
How jocund did they drive their team afield!
How bow’d the woods beneath their sturdy stroke!

Let not Ambition mock their useful toil,
Their homely joys, and destiny obscure;
Nor Grandeur hear with a disdainful smile
The short and simple annals of the poor.

The boast of heraldry, the pomp of pow’r,
And all that beauty, all that wealth e’er gave,
Awaits alike th’ inevitable hour.
The paths of glory lead but to the grave.

Nor you, ye proud, impute to these the fault,
If Mem’ry o’er their tomb no trophies raise,
Where thro’ the long-drawn aisle and fretted vault
The pealing anthem swells the note of praise.

Can storied urn or animated bust
Back to its mansion call the fleeting breath?
Can Honour’s voice provoke the silent dust,
Or Flatt’ry soothe the dull cold ear of Death?

Perhaps in this neglected spot is laid
Some heart once pregnant with celestial fire;
Hands, that the rod of empire might have sway’d,
Or wak’d to ecstasy the living lyre.

But Knowledge to their eyes her ample page
Rich with the spoils of time did ne’er unroll;
Chill Penury repress’d their noble rage,
And froze the genial current of the soul.

Full many a gem of purest ray serene,
The dark unfathom’d caves of ocean bear:
Full many a flow’r is born to blush unseen,
And waste its sweetness on the desert air.

Some village-Hampden, that with dauntless breast
The little tyrant of his fields withstood;
Some mute inglorious Milton here may rest,
Some Cromwell guiltless of his country’s blood.

Th’ applause of list’ning senates to command,
The threats of pain and ruin to despise,
To scatter plenty o’er a smiling land,
And read their hist’ry in a nation’s eyes,

Their lot forbade: nor circumscrib’d alone
Their growing virtues, but their crimes confin’d;
Forbade to wade through slaughter to a throne,
And shut the gates of mercy on mankind,

The struggling pangs of conscious truth to hide,
To quench the blushes of ingenuous shame,
Or heap the shrine of Luxury and Pride
With incense kindled at the Muse’s flame.

Far from the madding crowd’s ignoble strife,
Their sober wishes never learn’d to stray;
Along the cool sequester’d vale of life
They kept the noiseless tenor of their way.

Yet ev’n these bones from insult to protect,
Some frail memorial still erected nigh, With uncouth rhymes and shapeless sculpture deck’d, Implores the passing tribute of a sigh.

Their name, their years, spelt by th’ unletter’d muse,
The place of fame and elegy supply:
And many a holy text around she strews,
That teach the rustic moralist to die.

For who to dumb Forgetfulness a prey,
This pleasing anxious being e’er resign’d,
Left the warm precincts of the cheerful day,
Nor cast one longing, ling’ring look behind?

On some fond breast the parting soul relies,
Some pious drops the closing eye requires;
Ev’n from the tomb the voice of Nature cries,
Ev’n in our ashes live their wonted fires.

For thee, who mindful of th’ unhonour’d Dead
Dost in these lines their artless tale relate;
If chance, by lonely contemplation led,
Some kindred spirit shall inquire thy fate,

Haply some hoary-headed swain may say,
“Oft have we seen him at the peep of dawn
Brushing with hasty steps the dews away
To meet the sun upon the upland lawn.

“There at the foot of yonder nodding beech
That wreathes its old fantastic roots so high,
His listless length at noontide would he stretch,
And pore upon the brook that babbles by.

“Hard by yon wood, now smiling as in scorn,
Mutt’ring his wayward fancies he would rove,
Now drooping, woeful wan, like one forlorn,
Or craz’d with care, or cross’d in hopeless love.

“One morn I miss’d him on the custom’d hill,
Along the heath and near his fav’rite tree;
Another came; nor yet beside the rill,
Nor up the lawn, nor at the wood was he;

“The next with dirges due in sad array
Slow thro’ the church-way path we saw him borne.
Approach and read (for thou canst read) the lay,
Grav’d on the stone beneath yon aged thorn.”

Here rests his head upon the lap of Earth
A youth to Fortune and to Fame unknown.
Fair Science frown’d not on his humble birth,
And Melancholy mark’d him for her own.

Large was his bounty, and his soul sincere,
Heav’n did a recompense as largely send:
He gave to Mis’ry all he had, a tear,
He gain’d from Heav’n (’twas all he wish’d) a friend.

No farther seek his merits to disclose,
Or draw his frailties from their dread abode,
(There they alike in trembling hope repose)
The bosom of his Father and his God.