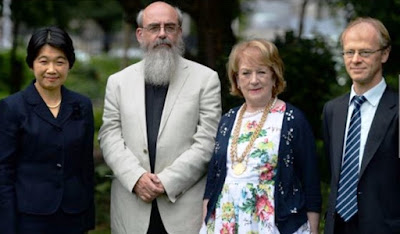 The Irish Campaign for Nuclear Disarmament (Irish CND) is holding its annual commemoration of the bombing of Hiroshima next Sunday [6 August 2017], the 72nd anniversary of the dropping of the first atomic bomb.

The commemoration of the victims of the Hiroshima atomic bomb takes place on Sunday [6 August 2017], the 72nd anniversary of the bombing, at 1.10 p.m. at the memorial cherry tree in the park in Merrion Square, Dublin 2.

It is estimated that 80,000 people were killed directly by the bomb dropped on Hiroshima on 6 August 1945, and that within a year casualties had reached 140,000.

It is estimated that about 17,000 nuclear weapons remain in the world today. While this is less than the Cold War peak, it is still enough to destroy life on earth as we know it many times over.

This year’s ceremony takes place at the memorial cherry tree planted by Irish CND on 6 August 1980.

The speakers at this year’s commemoration include Ms Midori Yamamitsu, Counsellor and Deputy Head of Mission at the Japanese Embassy in Ireland, and Councillor Larry O’Toole, representing the Lord Mayor of Dublin. Representatives of several other embassies have been invited to attend.

There will be short contributions of poetry and music from Irish and Japanese artists and a wreath will be laid at the memorial tree.

Because Hiroshima Day falls on a Sunday this year, and because of the difficulty of reaching Dublin from a parish in west Limerick and north Kerry, this is the first time in many years that I am going to be absent from this commemoration, and the first time I am going to miss it since I was elected President of Irish CND.

Announcing the programme for this year’s commemorations, Dr David Hutchinson Edgar, chairperson of Irish CND, says: ‘As we reflect on the responsibility that the horrors of Hiroshima place on us to ensure that nuclear weapons are never used again, there is positive news in the agreement at the United Nations on a new international treaty which, for the first time, will explicitly ban nuclear weapons.’

He continues: ‘In a world of many uncertainties as regards the long-term stability of today’s global political systems, it should be clearer than ever that weapons of mass destruction should have no place in building a safer, fairer, more sustainable world.’

This inspiring ceremony gives an opportunity each year to stand in solidarity with the victims of these horrific weapons of mass destruction, and to affirm our determination to work for their elimination, the only way to ensure that the ghastly events of Hiroshima and Nagasaki will not be repeated.

Meanwhile, international negotiations on the adoption of the Treaty on the Prohibition of Nuclear Weapons reached a climax last month [7 July 2017] with a vote at the United Nations.

The negotiations began in March, and in last month’s vote in New York, there was only one vote against and 122 in favour. The outcome showed the determination of the vast majority of the world’s states to increase the momentum towards the abolition of nuclear weapons.

Although the negotiating conference was boycotted by the UN member states with nuclear weapons and many of their allies, the treaty has been hailed by campaigners as a significant step in de-legitimising nuclear arms by declaring it illegal to ‘develop, test, produce, manufacture, otherwise acquire, possess or stockpile nuclear weapons or other nuclear explosive devices,’ to threaten their use, or to assist others in their development.

This explicit prohibition closes a loophole in the 1970 Non-Proliferation Treaty, which has been exploited by nuclear-armed states to avoid their disarmament obligations under that treaty.

A more detailed response from Irish CND to the new Treaty can be read here, while extensive information about the treaty from Irish CND’s international partners in ICAN can be accessed here.

Further information on Sunday’s Hiroshima Day commemoration is available on the Irish CND website and through the Irish CND facebook group.