An afternoon walk in search
of Askeaton Rowing Club

On the bend on the River Deel at Gort, downriver from Askeaton, this afternoon (Photograph: Patrick Comerford, 2017; click on image for full-screen view)

For the past few months I have been wondering where there was a rowing club in Askeaton, and was unable to find a slipway, a boathouse or rowing boats.

I had visited the pontoon at Massy’s Quay some months ago, with its berths and boats, but I wondered where Askeaton Rowing Club had been based on the banks of the River Deel.

Despite the overcast skies and the grey clouds, I went for a walk in Askeaton yesterday after a pastoral visit and buying the newspapers, and went in search of the slipway at Gort.

As I walked down a narrow road on a hillside above the west bank of the River Deel, I came across two 200-year old houses in the townland of Coolrahnee, just south of the point where this road passes under the main N69 road that bypasses Askeaton. 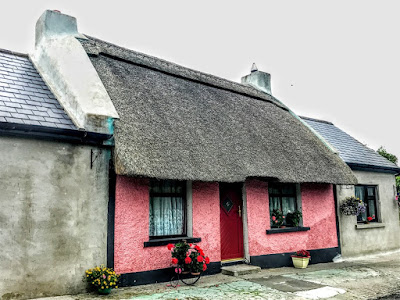 A thatched cottage built ca 1800, close to the banks of the River Deel (Photograph: Patrick Comerford, 2017)

The first house still retains its thatch and with its attractive pink façade it faces a green space leading down to the river, with the ruins of the Franciscan Abbey on the opposite bank of the river.

This house was built ca 1800. With its low massing and steeply thatched roof, this modest-scale house is an important element of the vernacular heritage of Askeaton. The house retains its early fabric throughout and, although the windows have been enlarged, they retain their informal rhythm, contributing to the traditional character of the façade.

The attraction of this house is enhanced by the pitched thatched roof, and there are rendered chimney-stacks. The extension and the lean-to have single-pitched corrugated-iron roofs, and there are roughcast rendered walls. Although the house has a replacement uPVC door, and replacement uPVC windows with concrete sills, it is an attractive feature in this quiet corner of Askeaton. 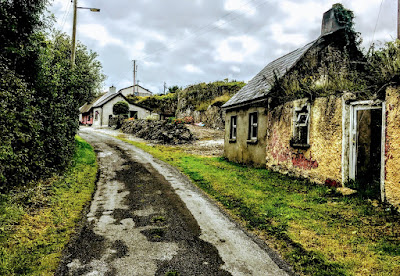 A former thatched cottage built ca 1800 is derelict close to the banks of the River Deel (Photograph: Patrick Comerford, 2017)

A little further north, just before the road-bridge, what was once a neighbouring traditional thatched house has fallen into decay.

It is still possible to image the former charm of this cottage, which was once another important part of Askeaton’s vernacular heritage. This house was built ca 1800 as a detached, three-bay single-storey, direct entry thatched house. Later, a two-bay single-storey extension was added to the south elevation.

This house once had a pitched thatched roof, with render copings, rendered chimneystacks and roughcast rendered walls. 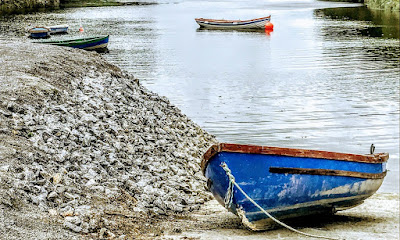 From these two cottages I continued north, under the road, and on to Gort, about 500 metres downstream from the centre of Askeaton. Here a curve on the River Deel forms a natural expanse that seems to make this riverfront area ideal for rowing and swimming.

Gort was originally used by commercial boats bringing in turf and coal and bringing out lime. Since the 1920s, Gort has been used for water-based sports and activities by the local community.

Regattas were held at Gort from 1920 until 1970 at Gort. These were popular community events with boat teams coming from around the country. Askeaton rowing club was founded at Gort in 1955, and Askeaton Swimming Club was founded here in 1959.

The site was turned into a business premises in the 1990s, the community lost access to the area, and the waterfront area at Gort fell into disrepair. But Askeaton Swimming Club bought the former Southern Chemicals site four years ago [2013] with a vision of returning it to the community. The club was responsible for raising more than €500,000 to fund building the nearby modern sports and leisure complex, and now it wants to turn Gort back into a centre for water-based activities.

The vision in the Gort Waterfront Redevelopment project is to transform this into a family-friendly resource on the River Deel. The plans include dredging and clearing the area in front of the pier, removing silt, rubble and illegally dumped items, resurfacing the slipway, landscaping the waterfront area, reseeding the grass area, and developing a picnic area with three all-weather picnic tables.

So far, the club has spent about €50,000 buying the site and creating a small picnic area in one part of it. However, the ambitious plan to develop the amenities have been threatened recently by what club members believe are ‘unreasonable’ planning conditions requiring the club to close an access road off the N69. 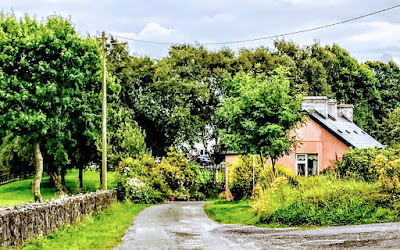 On the narrow road leading from Askeaton to the waterfront at Gort (Photograph: Patrick Comerford, 2017)

Club members believe the council should shoulder the responsibility for and the cost of putting a barrier in place on a slip road off the N69, about 500 metres from the site. If the slip road is closed, the only access route from Askeaton would be along the narrow road that passes in front of the two cottages I was looking at this afternoon and through the underpass where there is no footpath.

Meanwhile, the annual 2.5 km swim on the River Deel in Askeaton takes place here next Wednesday evening [9 August 2017] at 7pm.

Walking back into Askeaton by the banks of the River Deel this afternoon (Photograph: Patrick Comerford, 2017; click on image for full-screen view)