An abandoned church on
the edges of Ballybunion 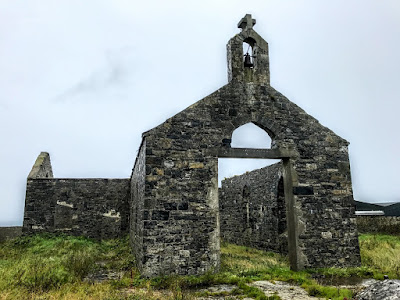 Doon Church has been stripped bare but is still standing on the edges of Ballybunion (Photograph: Patrick Comerford, 2017)

The sight of closed or abandoned churches is often distressing for parishioners, who remember family events in them, from baptisms and weddings to funerals and burials.

There are many closed churches in this group of parishes, and as people point out the former church buildings or the sites, they also point out the graveyards and share found memories of Carol Services or Harvest Services, and stories about Sunday schools and former parishioners.

So, during a visit last weekend to Ballybunion, Co Kerry, where I am familiar with Saint Augustine’s Church, the former Church of Ireland parish church which has become a local library, I was surprised to come across the ruins of a former Roman Catholic parish church that was built almost two centuries ago.

Doon Church, Ballybunion, was built by Father John Buckley around 1830-1834, shortly after Catholic Emancipation in 1829. Local people say it was the first post-Emancipation church built in Munster.

The ruins are halfway between the River Cashen to the south and Beal Point to the north, at a point where roads met from the north, south and east. Because of this key location, some people speculate that it may have been a Mass site in the Penal days.

The church was built of stone and mortar, without internal lighting or hearting, on a site owned by Mr William Gunn. But in its time it was a ‘state-of-the-art’ church building.

The church was a ‘barn-style’ church, cruciform in shape, with three galleries, one in each transept and a third gallery at the back of the church. The doorway was arch-shaped and the walls were pierced with two-light windows.

It is said a local landlord, George Hewson, built a gate at the Cliff Road side of the new Catholic church to screen it from the view of its local Protestant neighbours.

When Father Mortimer O’Connor was appointed parish priest of Ballybunion in 1866, one of his first actions was to remove the Cliff Road gate. His action made it easier for people in Ballybunion to get to the church, and Hewson never replaced the gate.

Meanwhile, Saint John’s Church was built in 1897 to designs by George Coppinger Ashlin (1837-1921) of Ashlin and Coleman, a practice with a direct link to AWN Pugin, providing Ballybunion with a Catholic parish church in the Gothic revival style and of architectural importance.

Over the years, the church fell into decay, and in 1972 an insurance company withdrew its public liability cover the building, and services had to be discontinued. The last Mass in Doon Church was celebrated 45 years ago on 1 December 1972.

The listed building was sold by a developer in the 1970s to the Ballybunion Development Company, which bought it with financial assistance from the church. The church was sold again in September 2005 and the proceeds were used to help build a swimming pool and leisure centre that opened ten years ago in 2007.

The listed building had a guide price of €250,000 and its sale was the subject of debate in Ballybunion. But the selling price and the identity of the buyer remained private.

The ruins of the church still stand at this junction. Although it was once a listed building, the roof, doors, windows, galleries and other internal fittings and fixtures have all been removed, although the bell is still hanging in the bellcote. 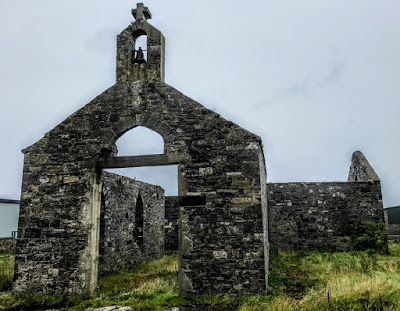 The bell is still hanging in the bellcote in Doon Church, Ballybunion (Photograph: Patrick Comerford, 2017)