Richard Harris celebrated
in Kilkee and Limerick, from
MacArthur Park to King Arthur 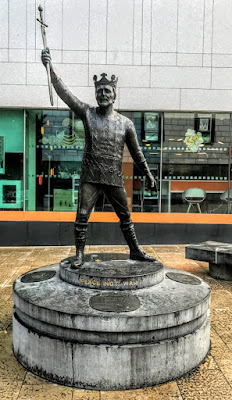 Richard Harris is Limerick’s most acclaimed actor. And there are two statues honouring him in this area, both by the sculptor Jim Connolly.

Jim Connolly is one of Ireland’s leading bronze sculptors, best known for his highly acclaimed life-size portraits. He lives and works in Kilbaha, on Loop Head in West Clare, where he runs his own art foundry. His other acclaimed works include his sculpture of the Kerry GAA legend, Páidí Ó Sé unveiled in Ventry in May 2015, and his life-size sculpture of the writer John B Keane, in Listowel, Co Kerry, erected in 2007.

Richard Harris(1930-2002) is one of Ireland’s greatest movie stars. He is known today by a younger generation as Albus Dumbledore in the first two Harry Potter films, but he died on 25 October 2002 at the age of 72 before filming began the third film in the series, Harry Potter and the Prisoner of Azkaban.

He went to the Jesuit-run Crescent College, where he played rugby on several Munster Junior and Senior Cup Teams for Crescent and played for Garryowen.

His sporting career was cut short after a bout of tuberculosis. During his illness, he read extensively and nurtured an ambition for a life in the arts.

After recovering, he moved to England to become a director but then decided to study acting at the London Academy of Music and Dramatic Art. After roles on the stage in the West End Theatre, he made his first film appearance in 1958 in Alive and Kicking. A year later, he played the lead role in The Ginger Man in the West End in 1959.

Harris starred with Gregory Peck, David Niven and Anthony Quinn in The Guns of Navarone in 1961. But his most impressive performance came the following year in This Sporting Life. For this, he was Best Actor at the 1963 Cannes Film Festival and received an Academy Award nomination.

After playing the role of King Arthur in the film version of the musical Camelot (1967), Harris took a break from acting and recorded several albums, including the song MacArthur Park, which was a million selling hit. At the same time, he published a collection of poetry.

However, he returned to acting in 1990 to play the lead role of the ‘Bull’ McCabe in The Field, a film version of John B Keane’s play, which brought him his second Academy Award nomination.

Harris was highly commended for his role as the Roman emperor Marcus Aurelius in Gladiator (2000), when he starred alongside Russell Crowe.

In 1957, he married Elizabeth Rees-Williams and they had three children: actor Jared Harris, actor Jamie Harris and director Damian Harris. They were divorced in 1969. His second marriage to Ann Turkel also ended in divorce. 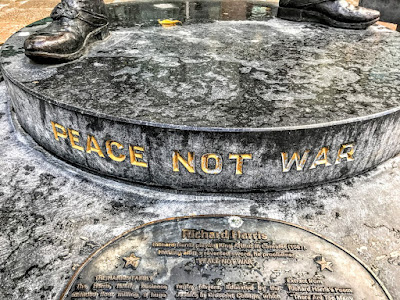 Jim Connolly’s statue of Richard Harris on Bedford Row in Limerick was unveiled ten years ago, in September 2007, by the Mayor of Limerick, Councillor Ger Fahy.

Critics say Jim Connolly’s bronze statue is too small and that Harris was larger than life. But Connolly has pointed out that his statue is, in fact, larger than life. He is reported as saying: ‘Richard Harris was six foot and not six foot three.’ He verified this with Noel Harris, Richard’s brother. ‘The statue measures six feet and two inches.’

Jim Connolly’s statue is entitled ‘Peace Not War’ and is based on Harris’s role in Camelot. The statue has four plaques on the base giving brief biographical details and information on some of his movies. 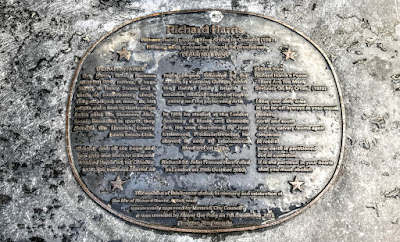 A life in words … one of the four plaques encircling Jim Connolly’s sculpture of Richard Harris in Limerick (Photograph: Patrick Comerford, 2017)

The Inscriptions at the main frontage of the state read:

Holding aloft a reversed sword, he proclaims: ‘Peace not War.’

The Harris family business included flour milling, a huge bakery in Henry Street and a chain of confectionery shops. They employed as many as 500 people and a fleet of Harris cargo boats plied the Shannon. Also, keenly interested in sports they founded the Limerick County Lawn Tennis Club.

Richard, one of six boys and two girls was born to Ivan and Mildred Harris on 1st October 1930. The brothers starred as rugby players. Educated by the Jesuits in Crescent College, which the Harris family helped to establish, Richard excelled at rugby, poetry and the performing Arts.

In 1956 he studied at the London Academy of Music and Dramatic Art. He was discovered by Joan Littlewood, Producer/Director. He starred in over 80 international films and on stage.

Extract from Richard Harris’s Poem: ‘There Are Too Many Saviours On My Cross’ (1972):

The erection of this bronze statue, in memory and celebration of the life of Richard Harris, Actor, was unanimously approved by Limerick City Council.

It was unveiled by Mayor Ger Fahy on 7th September 2007.

Around the base of the statue there are three further inscriptions recalling his work as an actor in three other movies:

This film, a recognised classic, tells the story of the harsh life and realities of a professional rugby footballer in England. His powerful performance in the leading role as Frank Machen launched a remarkable debut and won for Richard Harris international acclaim and a Best Actor Oscar Nomination.

This film, a rural Irish masterpiece, was adapted by Jim Sheridan from a stage play written by John B. Keane. It tells the story of an Irish farmer willing to go to any lengths, to keep a field his family had cultivated for generations. His powerful performance as the doomed farmer, Bull McCabe, was to re-invigorate Richard Harris’s acting career and win for him his second Oscar Nomination. 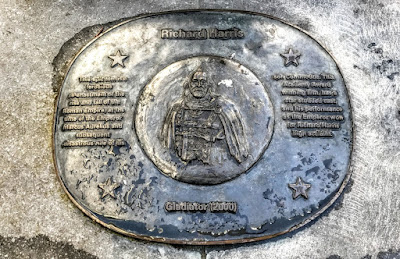 This epic film is a ferocious re-enactment of the rise and fall of the Roman Empire, at the time of the Emperor Marcus Aurelius and subsequent disastrous rule of his son Commodus. This Academy Award winning film, has a star studded cast and his performance as the Emperor won for Richard Harris high acclaim. 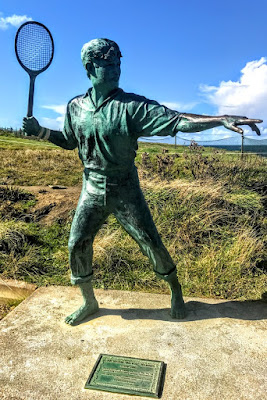 Jim Connolly’s bronze statue of Richard Harris in Kilkee honours the actor in the West Clare resort where he spent many summer holidays. In this life-size statue, Connolly depicts Harris playing racquet ball, a game played against the sea wall in Kilkee, where he won the men’s open racquet championship a number of times.

The ‘Tivoli Cup’ was the prize in of a long-running racquets competition played against the plastered white walls on Kilkee beach – a game unique to the seaside town. Richard Harris won the trophy four times in a row (1948-1951), a record that still stands. The was revived in 2009.

The statue was unveiled in September 2006 by Russell Crowe, who became friends with Richard Harris in 1999 while they were filming Gladiator.

An appeal against planning permission for the statue on Wellington Square in Kilkee means it remains standing on a temporary site beside the Diamond Rocks café at the Pollock Holes.