The Reformation after 500 years:
3, Martin Luther and his legacy today 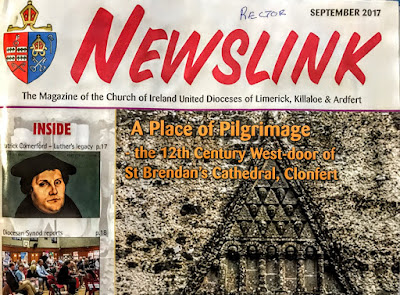 Concluding his three-part series on the Reformation, Patrick Comerford looks at Martin Luther and his legacy today.

In a recent feature in The Guardian, the Irish-born historian Dr Christopher Kissane wrote about the 500th anniversary of the Reformation and Martin Luther posting his ’95 Theses’ in Wittenberg on 31 October 1517. He points out that this anniversary is ‘as an opportunity for reflection’ and ‘a chance to heal old wounds.’ So, as this series concludes, it is appropriate to ask: What did Martin Luther achieve? And what is his legacy?

Luther’s theological insights are often summarised in the ‘Three Solas’ or the ‘Five Solas’: Sola Scriptura (the Bible alone); Sola Fide (Faith alone); and Sola Gratia (Grace alone); to which some add Solo Christo (‘through Christ alone’) and Soli Deo Gloria (‘to the glory of God alone’).

However, much of what is accepted as Lutheran theology, including the Augsburg Confession, is the work of Luther’s more intellectual contemporary Philip Melanchthon (1497-1560). The Three Solas were not identified systematically until the 20th century, and the Five Solas are not listed together until 1965.

In his approach to Scripture and Faith, Luther challenged centuries of theological consensus in the Church, East and West. Until Luther, Faith was understood not as individual assent but as the Faith delivered to the apostles, preserved in the Church and expressed in the Creeds. But his emphasis on individual faith, conscience and interpretation made an insightful contribution to the Enlightenment.

Luther rejected the centuries-old consensus on the canon of Scripture. He relegated many canonical books of the Old Testament to the Apocrypha, and tried to remove Hebrews, James, Jude and Revelation from the New Testament because they challenged his views on Sola Gratia and Sola Fide. His followers rejected these proposals, but they changed the order of the books, which remain last in the German-language Luther Bible. Did Luther try to shape the Bible to fit his theology rather than allowing the Bible to shape his theology?

Luther’s translation of the Bible was completed in 1534. It helped to standardise the modern German language, was a landmark in German literature and contributed to shaping German cultural and national identity.

Luther’s cultural legacy is also found in the arts, including church architecture, painting and music.

The altar pieces in Wittenberg and Weimar are among the great works by Lucas Cranach (1472-1553), who also painted the best-known portrait of Luther. His contemporaries included Matthias Grünewald (1470-1528) and Albrecht Dürer (1471-1528).

Luther was a prolific hymn-writer. His best-known hymn is ‘A mighty fortress is our God,’ and many of his hymns were set to music later by Johann Sebastian Bach (1685-1750).

But the ugly, unacceptable side of Luther is his antisemitism. His virulent anti-Jewish writings helped shape German, European and Christian expressions of anti-Semitism. 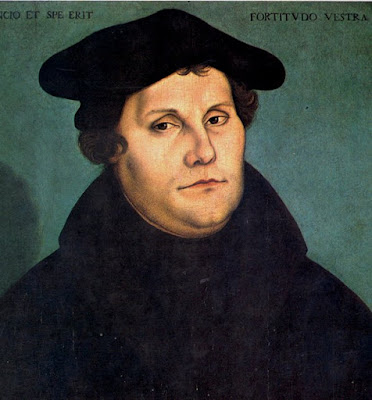 Martin Luther … a portrait by Lucas Cranach in 1529

Luther’s language in On the Jews and Their Lies (1543) is vile as he claims the Jews are full of the ‘devil’s faeces ... which they wallow in like swine.’ He calls for synagogues and schools to be set on fire, homes razed, prayer books destroyed, rabbis forbidden to preach, property and money confiscated. It is shocking to read him as he says Jews should be shown no mercy or kindness, afforded no legal protection and advocates their murder: ‘We are at fault in not slaying them.’

His views informed the foundation for Nazi attacks on Jews in the 1930s and 1940s. Diarmaid MacCulloch says Luther provided a blueprint for the Kristallnacht, when Lutheran bishops applauded the burning of synagogues on Luther’s birthday, 10 November 1938.

On the other hand, one of the towering figures of the 20th century was Dietrich Bonhoeffer (1906-1945), the Lutheran theologian who died in a concentration camp for his resistance to Hitler and the Nazis. Since 1930, there has been full communion between the (Lutheran) Church of Sweden and the member churches of the Anglican Communion. The contacts maintained by Bonhoeffer and Bishop George Bell through Swedish mediation laid the foundations for the World Council of Churches.

Today, there is full communion between the Anglican churches in Europe and the Episcopal Lutheran churches through the Porvoo Communion, which brings together 15 churches. There are similar agreements in the US and Canada.

Luther’s primary demands were for an end to Church corruption, particularly in the abuse of Papal authority and the ‘sale’ of indulgences; the administration of Holy Communion under both forms of bread and wine; access to the Bible in the common language; and an end to compulsory clerical celibacy. In recent decades, the Vatican has resolved most of these debates, including even clerical celibacy, albeit in a limited and restricted way.

But many of the later divisive dogmas were not key issues at the Reformation, including the Immaculate Conception (1854), Papal Infallibility (1870) and the Assumption (1950). In 1999, the Lutheran World Federation and the Roman Catholic Church issued the Joint Declaration on the Doctrine of Justification, agreeing on Justification and lifting Roman Catholic anathemas that once applied to Lutherans. The declaration followed earlier affirmations of a shared, common faith, including the declaration on the Eucharist (1978).

Pope Francis has recently spoken favourably about the process, but there is some way to go before the divisions of the past five centuries are healed. 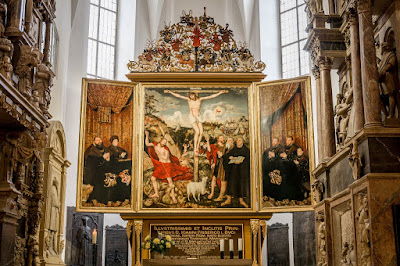 This feature was published in ‘Newslink’, the magazine of the Church of Ireland United Dioceses of Limerick, Killaloe and Ardfert, September 2017