A reminder of a once
regal presence in
Limerick city centre 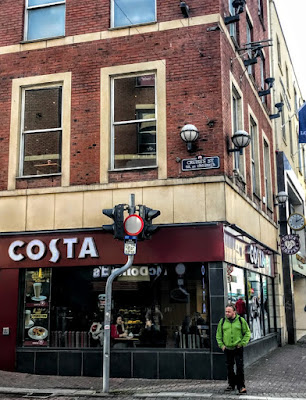 Limerick is endowed with an abundant supply of good coffee shops and cafés throughout the city centre. I have enjoyed trying new ones at regular intervals, although the well-known brands and chains also have their merits as ‘pit stops’ on days when I am trying to make haste between one bus connection and the next on the way between Dublin and Limerick.

Costa on the corner of Cruise’s Street and O’Connell Street is one of these convenient ‘pit stops’ for much-needed double espressos because it is also close to newsagents where I can stock up reading such as the The Guardian, New Statesman and Private Eye for the next long leg of the journey.

But the very name of Cruise’s Street and a plaque on the O’Connell Street façade of Costa are also reminders of an hotel that was torn down in 1991-1992 but that had been a Limerick institution for 200 years.

Cruise’s Royal Hotel was founded in 1791 on what was then George Street. In its final days it was one of the finest hotels in Limerick’s City Centre. The 80-room hotel provided a variety of entertainment for local people. The hotel had a presidential suite, and many Presidents and dignitaries who visited Limerick stayed there, including Richard Nixon.

In the 19th century, the guests at the hotel had included Daniel O’Connell, Charles Dickens and Charles Stewart Parnell.

George Russell was the first proprietor of the hotel when it was built in 1791. It passed through a number of hands before it was bought by the colourful Edward Cruise, who was a personal friend of Daniel O’Connell. In the 1820s, O’Connell conducted his Clare election campaign from Cruise’s Hotel, and later celebrated his victory there.

When the Viceroy of Ireland, Lord Mulgrave opened the new Wellesley Bridge in Limerick in 1835, he was feted afterwards at Cruise’s Hotel. The bridge is now known as Sarsfield Bridge.

William Makepeace Thackeray (1811-1863) visited Limerick in 1842, and stayed at ‘one of the best inns in Ireland - the large, neat, and prosperous one kept by Mr Cruise.’ This was the Royal Mail Coach Hotel or Cruise’s Hotel. There He was delighted to meet the proprietor, which he claimed was a rare occurrence in Ireland where hoteliers ‘commonly (and very naturally) prefer riding with the hounds, or manly sports, to attendance on their guests.’

Some years after his visit to Limerick, Thackeray caused offence with his comic song ‘The Battle of Limerick,’ which trivialises the Young Ireland movement and mocks and mimics Irish accents – although William Carleton remarked that he ‘writes very well about Ireland, for an Englishman.’

John Bright (1811-1889), the radical British politician who was almost a lone voice in opposing the Crimean War, regularly visited Castleconnell, Co Limerick, and on visit he was entertained at Cruise’s by the Mayor and Aldermen of Limerick. Bright often stayed at Cruise’s on his way to Castleconnell, as did his friend the London-born American financier and philanthropist George Peabody (1795-1869). The historian AJP Taylor says ‘John Bright was the greatest of all parliamentary orators … the alliance between middle class idealism and trade unionism, which he promoted, still lives in the present-day Labour Party.’

Cruise retired from the business in 1854, but his name continued to be part of the name of the hotel.

During his visit to Limerick in 1858, Charles Dickens (1812-1870) stayed at the hotel, which he referred to as the Royal Hotel. He was touring Ireland, visiting Belfast, Dublin and Cork, and in Limerick he was reading on the stages at the Theatre Royal on Henry Street, close to the corner of Mallow Street – a building that was destroyed by fire in 1922.

In a letter to his nephew, Dickens described the hotel and his stay in Limerick in September 1858. The Royal Hotel referred to was Cruise’s Royal Hotel on what was then George Street.

John Joseph Cleary, who succeeded Edward Cruise as proprietor, made many modern improvements to the hotel, including the introduction of hot baths and showers. He was Mayor of Limerick in 1873 and 1874.

From the 1870s and 1880s on, political guests in the hotel included Charles Stewart Parnell, John Redmond and John Dillon.

Other guests in the Victorian period included Alfred Lord Tennyson and his son, as they were passing through Limerick on their way to Curragh Chase to visit their friend, the poet Aubrey de Vere and his family.

When Edward Cruise, who gave his name to the hotel, died on 25 July 1887, in his 86th year, he was buried in Saint John’s churchyard, Limerick, close to the original proprietor, George Russell.

The hotel was demolished in 1991 to make way for Cruise’s Street, a pedestrianised street between O’Connell Street and Chapel Street, and that opened 25 years ago, in late 1992. 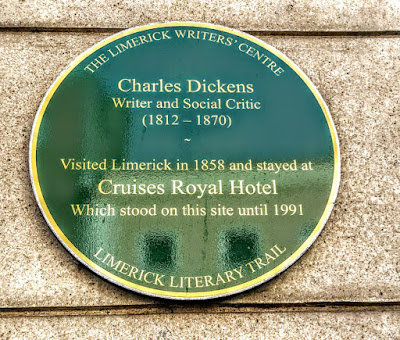 A visit by Charles Dickens remembered on a plaque on the site of Cruise’s Royal Hotel (Photograph: Patrick Comerford, 2017)