The Toll House, a
Gothic folly beside
Thomond Bridge

The Toll House and Thomond Bridge seen from King John’s Castle in Limerick, both designed by the Pain brothers (Photograph: Patrick Comerford, 2017; cick on image for full-screen view)

The old toll house on the corner of Castle Street and Verdant Place, stands on the banks of the River Shannon, beside Thomond Bridge and facing the more majestic King John’s Castle.

With its lancet windows, turrets, exaggerated crenellations and parapets, and its gothic appearance, it looks like another part of the mediaeval heart of Limerick. But this not a mediaeval gothic castle. Instead, it is a three-bay, two-storey limestone former toll house, built in the Gothic Revival style in limestone around 1840.

The mediaeval-like features include the pointed-arch door, the blind gun-loops on the front elevation and the south-west corner, and a carved limestone plaque bearing the city’s heraldic emblem of two towers. 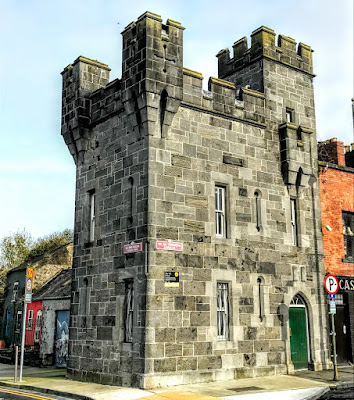 The Toll House, which also looks like a folly, replaced an earlier toll house that stood on the same site. It was built to collect tolls entering the city from the Thomond or Co Clare side, west of the Shannon.

The building was a humorous exercise, designed by the brothers James and George Pain, the architects who also designed Thomond Bridge. Although it has a fortified defensive look, it brings together a functional use and the romantic ideas popularised by the 19th-century Gothic Revival movement.

The Toll House was restored in recent decades, retaining many of the original features, including the narrow slit windows and original rough stonewalls, It was on the market to rent as a one-bedroom house in 2012, with agents emphasising it combination of rustic charm and modern convenience and the picturesque views of the River Shannon.

The original Thomond Bridge was probably built between 1185 and 1210 to link the castle and King’s Island with the Thomond or Co Clare side of the River Shannon. This bridge collapsed in 1298, killing 80 people.

The bridge has been rebuilt several times over the centuries. It is said that this was the site of the oldest bridge in Limerick City, and was once the only bridge across the Shannon.

The bridge of the 18th and early 19th centuries had 14 unequal arches. The bridge is the scene for Limerick’s tales from the Bard of Thomond, including ‘The Bishop’s Lady,’ who, according to legend, would throw late-night walkers over the bridge into the river below. The bridge was sturdy, but was often flooded at high tide.

The bridge that stands today was built in 1838-1840 and was designed by the Pain Brothers, who also designed the County Courthouse, the Custom House and many churches and rectories throughout Co Limerick and Co Clare. 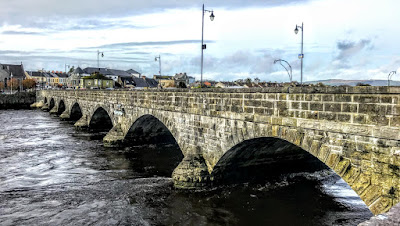 Thomond Bridge was designed by the Pain brothers and built in 1838-1840 (Photograph: Patrick Comerford, 2017)

Hello, I am an art historian who has written a book on the art dealer Hugh Lane. In my chapter on Dublin, I relate the Hugh Lane Gallery to the controversy over the Saint-Gaudens statue of Parnell that you discuss in your blog. I was wondering if you would be willing to let me reproduce your photograph of the statue in my book? I would give you credit as the photographer, and I'd be delighted to send you a copy when it is published next fall. Please let me know what you think. I can be reached at oneillme@wfu.edu. Thank you.