‘Che sara sara’: who says
whatever will be will be? 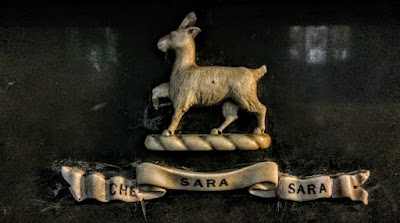 The phrase che sera sera seems to have become popular in England by the 16th century, when it was adapted for English heraldic mottos.

The Spanish form appears on a brass plaque dated 1559 in the Church of Saint Nicholas, Thames Ditton, Surrey. The Italian form was first adopted as a family motto by either John Russell (1485-1555), 1st Earl of Bedford, or his son, Francis Russell (1527-1585), 2nd Earl of Bedford.

Some sources say the motto was first adopted by John Russell after the Battle of Pavia in 1525, and that he asked for the phrase to be engraved on his tomb when he died in 1555.

Francis Russell, the 2nd Earl of Bedford, adopted the motto too, according to a manuscript dated 1582. Their successors – the Earls of Bedford and later the Dukes of Bedford – and , continued to use the motto. The descendants of John and Francis Russell include John Russell (1792-1878), British Prime Minister (1846-1852, and 1865-1866), the philosopher Bertrand Russell (1872-1970), and the Russell family who gave their names to large tracts of property in London.

Other aristocratic families also adopted the motto, and it seem only natural that it was also used by the Russell family, a prosperous merchant family in Limerick who married into the Pery family. They were not descended from the Dukes of Bedford, but they included many 18th and 19th century Mayors of Limerick.

The family was involved in many of the banking and merchant ventures in Limerick, and many family members were buried at Saint John’s Church. However, the family motto also appears on monument in Saint Mary’s Cathedral commemorating Colonel Augustus Russell of Croom Castle, Co Limerick, who died in 1880. 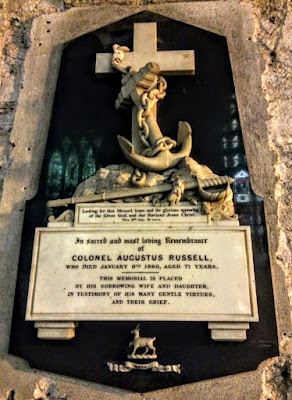 Soon after the phrase was adopted as an heraldic motto by the Russells and other families, it was quoted as che sera sera by Christopher Marlowe in his play Doctor Faustus (Act 1, Scene 1), written about 1590 and published 1604. Marlowe’s text includes the archaic Italian spelling ‘Che sera, sera / What will be, shall be.’

Early in the 17th century the saying begins to appear in the speech and thoughts of fictional characters as a spontaneous expression of a fatalistic attitude. But the phrase is not grammatically correct in Italian, and is merely a construction using Italian words.

The standard Italian form is quel che sarà, sarà (‘what will be, will be’), and the phrase constructed for Tudor heralds ignores the correct spelling, accents and grammar. In Italian, a pronoun such as quell, quello or ciò is needed at the very beginning of the sentence.

The saying is always in an English-speaking context, and has no history in Spain, Italy, or France, and in fact is ungrammatical in all three Romance languages. It is composed of Spanish or Italian words superimposed on English syntax. It was evidently formed by a word-for-word mistranslation of English ‘What will be will be,’ merging the free relative pronoun ‘what’ (‘that which’) with the interrogative ‘what?’

The phrase was popularised by the 1956 song Que Sera, Sera, which adopted a faux-Spanish spelling for the phrase and the song title.

The song Que Sera, Sera (Whatever Will Be, Will Be) was written by Jay Livingston and Ray Evans. It featured in Alfred Hitchcock’s film The Man Who Knew Too Much (1956), starring Doris Day and James Stewart.

The song became a No 2 hit in the US and a No 1 hit in Britain for Doris Day in 1956, and it won an Academy Award for Best Original Song. From 1968 to 1973 it was her signature song as the theme song for the sitcom The Doris Day Show.

The three verses of the song move through the life story of the singer, from childhood, through her young adulthood and falling in love, and then to being a mother. Each time, she each asks: ‘What will I be?’

The chorus repeats the answer: ‘What will be, will be.’

The popularity of the song led to curiosity about the origins of the saying and its language. The Spanish-like spelling disguised the Italian origins of the phrase adapted by Livingston and Evans.

Perhaps either Livingston or Evans had seen the 1954 Hollywood film The Barefoot Contessa, starring Humphrey Bogart, Ava Gardner and Edmond O'Brien. In the movie, a fictional Italian aristocratic family has the motto Che sarà sarà carved in stone at the ancestral palazzo of Count Vincenzo Torlato-Favrini.

It is a dark and gloomy movie, and its mood is in sharp contrast to the personality of Doris Day or the way in which the song penned by Livingston and Evans has been adapted in popular culture over the past 60 years.

Thanks to the popularity of the song, the phrase has been adopted around the world for books, movies, restaurants, holiday rentals, airplanes, and race horses, and by football fans who have had their hopes raised.

The version in Italian also attributed to "an English family" in Hard Times by Charles Dickens.
Regards,
Phil Thomas

Found the same phrase and simbol in Saint Fin Barre's Cathedral in Cork.
As an italian tourist I was quite intrigued by it and take a photo I can send at request.
Regards
Enrico