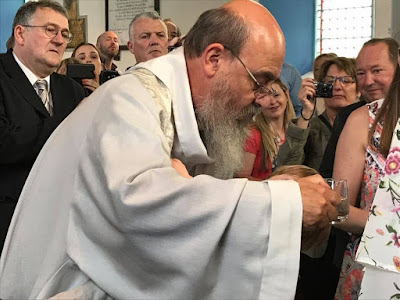 In the run-up to Christmas, ABC News interviewed Canon Patrick Comerford, who moved into the Rectory in Askeaton earlier this year

When did you come to Askeaton?

I came to Askeaton and the neighbouring parishes of Rathkeale, Castletown (Kilcornan) and Kilnaughtin (Tarbert) at the beginning of 2017 at the invitation of the Bishop of Limerick, Dr Kenneth Kearon.

Although I have lived in many part of Ireland throughout my life, I have no real connections with this area, and so I came to Askeaton without any expectations and without any presumptions.

Over the past 40 years, I have worked around the world, but during that time I continued to live in suburban south Dublin, and had no idea that I would find myself moving to a rural parish spread across West Limerick and North Kerry.

Four churches and a vast geographical spread … that’s large for one parish.

Yes, it feels as big as a diocese at times. There are four churches, and two are open on any one Sunday. But all four of them are going to be open at Christmas for celebrations of the Christmas Eucharist?

It’s a busy life for one priest?

Yes, but I’m here as the Priest-in-Charge on a part-time basis. That includes Sunday services, parish and school meetings, pastoral and home visits, hospital and school chaplaincies, and all that goes with being a priest in a large and lively parish.

If that’s part-time, what’s the other part of the week like?

When Bishop Kenneth Kearon appointed me here in January 2017, I continued to lecture in Dublin until the academic teaching year came to end. He also appointed me as the Precentor or senior canon in Saint Mary’s Cathedral, Limerick, and since April I have also been the Director for Education and Training in the diocese, developing the theological training and skills of priests and readers or lay ministers throughout the diocese.

What does this involve?

The Church of Ireland is far-flung, and the priests are thinly spread across a wide geographical area in eight counties, spreading from Limerick to south-west Kerry, up to Clare and East Galway and in many parts of Offaly and Tipperary.

We have had training days in Killarney and Askeaton, looking at topics such as communications and preparing for Advent, and future training days in 2018 are looking at how we maintain a spiritual life or a life rooted in daily prayer, preparing for Lent and Easter, and how to engage in inter-faith relationships, particularly at how we engage with our Jewish and Muslim neighbours.

Do you miss academic life?

I was teaching theology at the Church of Ireland Theological Institute in Dublin and at Trinity College for 15 years – first of all part-time for four years, and then full-time for the last 11 years. I was lecturing in liturgy and church history on a master’s degree programme, supervising research, and training people for ordination. It was a wonderful life, and I was also a professor in Trinity College Dublin, with all the extra academic committees and meetings that go with that too.

On a holiday in Greece once, I almost bought a T-shirt that said: ‘Three good reasons to be a teacher – June, July and August.’ But that was never my experience. Indeed, although I officially signed off in April, this summer still involved students whose research I had supervised defending their dissertations at a court of examiners, and in November I turned up for their degree conferrings in TCD.

They were very demanding but deeply satisfying years. But I also felt that if I was training priests for parochial ministry, I needed to put that into practice, working as a priest in a parish myself.

I also find that many of my experiences in academic life are very relevant to my role in training and education in this diocese.

How long have you been a priest?

I was ordained for the Diocese of Dublin and Glendalough in 2000. I was then 48, so I was what you might call a ‘late vocation,’ although I’m sure that call to ordained ministry first came when I was a 19-year-old, and I had been what we call a reader or lay minister since the early 1990s.

In 2007, Archbishop John Neill also made me a canon of Christ Church Cathedral, Dublin, and until I moved to Askeaton, I was active in the liturgical, pastoral and administrative life of the cathedral, a member of Diocesan Synods and Diocesan Councils. I continue to write a monthly column for the diocesan magazines in Dublin and Glendalough and in Cashel, Ferns and Ossory.

And before ordination, what did you work at?

I was a journalist for over 30 years. I had started training as a chartered surveyor, but while I was still training I began contributing features as a freelance journalist to the Lichfield Mercury and other provincial newspapers in the English Midlands.

From there I joined the staff of the Wexford People, and went to The Irish Times in the mid-1970s. For my last eight years at The Irish Times, I was the Foreign Desk Editor.

Did that mean much travel?

A lot of that time was spent in Dublin, co-ordinating international news coverage and editing the foreign news pages. But there were many foreign trips, some of them for weeks or even months at a time, travelling through East Asia, including Japan, Korea, China, the Middle East, including Egypt, Israel, Palestine, Syria and Turkey, and southern Africa, including South Africa and Namibia.

But most of all, I enjoyed covering life in Greece. I still have an abiding interest in Greek life, culture, politics and history, and I enjoy listening to Greek music and reading Greek poetry.

Tell ABC News a little about your childhood and your early life. Where were you born?

I was born in Rathfarnham in Dublin, between a synagogue and a laundry and opposite a cinema. But I moved around a lot in my childhood and early adult years, including my grandmother’s farm in west Waterford, school at Gormanston near Drogheda, important years in Lichfield, and then Wexford. Barbara and I were married in 1974, and we have two adult sons.

Where did you study theology?

Although I had trained as a chartered surveyor, I never practised. In my late 20s, I was awarded a fellowship that gave me the opportunity to spend a full-term in Japan, studying politics, economics and journalism. I was still working full-time as a journalist and 30 when I went back to study theology at Trinity College Dublin, the Irish School of Ecumenics, and Maynooth, and over five years in the 1980s got two degrees in theology. Then I was trained for ordination in the Church of Ireland Theological College, now the Church of Ireland Theological Institute.

Later in life, in more recent years, I went back to Cambridge and did further theological studies at the Institute for Orthodox Christian Studies and Sidney Sussex College, and I have also studied Latin and Liturgy at Ealing Abbey in London.

If you had not been ordained, or had not worked as a journalist, what would you think you would have done?

Perhaps I might have been an architect. But at school, my careers teacher advised me strongly not to consider it … I’m almost innumerate. I’m still a frustrated architect, and I enjoy architectural photography as a hobby. 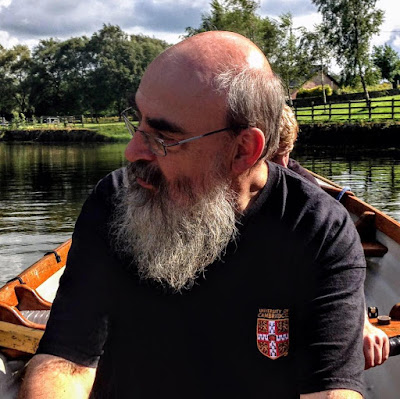 Rowing on the River Deel in Askeaton

What do you do on your time off in Askeaton?

Walking. I love walks on a beach, by a river bank, or along a lake shore. There have been plenty of opportunities here to go for walks by the banks of the River Deel and the Shannon Estuary, and I’ve even gone rowing on the Deel too. And there have been wonderful beach walks in Glin, Beale Beach, Carrigafoyle and Ballybunion.

As an historian and a ‘frustrated architect’ I enjoy my regular trips into Limerick during the week, exploring the history of this wonderful city, and photographic its rich heritage of architecture.

I have a broad taste in music, from opera, including Verdi and Puccini, to Mozart and Bach. My wide tastes also include Vaughan Williams, Mikis Theodorakis and Steeleye Span. I regret never learning to play a musical instrument, even though my school offered any musical education I wanted.

I read constantly, including the daily newspapers – my preferences are for the Guardian and The Irish Times, as well as the Economist, obviously. But I also find myself returning constantly to the poetry of TS Eliot when I am being thoughtful and the poems of John Betjeman when I am being humorous – poetry first, then history.

Now that you are no longer a foreign affairs journalist, do you still travel regularly?

Barbara and I were back to Greece twice in 2017, and had two trips to Italy. Of course, we plan to go back to Greece again in 2018. Having visited the Jewish Quarter in Krakow and Auschwitz and Birkenau at the end of 2016, we have also decided to visit Warsaw in the coming months, and to visit the Jewish ghetto there.

I am also back in England throughout the year. I had a life-changing spiritual experience in Lichfield as a teenager, and it remains my spiritual home. And I am a trustee of one of the oldest Anglican mission agencies, the United Society Partners in the Gospel (USPG). In the past, my engagement with Anglican mission work brought me to China, Hong Kong, Egypt and Romania. Now I am at regular USPG board meetings and conferences in England.

Have you given up writing?

No, not at all. Apart from my monthly column in two diocesan magazines, and writing for my own blog each day (www.patrickcomerford.com), I have written four chapters for three books that are to be published in 2018, and I am sure I still have a few books of my own to finish yet. 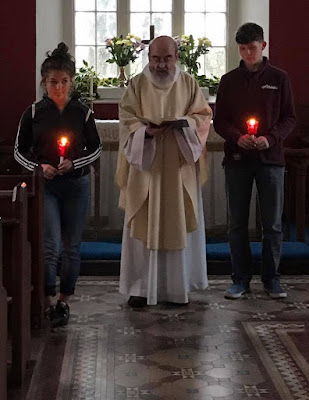 At the Easter Vigil in Castletown Church, Kilcornan

Are you looking forward to Christmas?

Of course. This is going to be my first Christmas in Askeaton, and it promises to be a very busy – perhaps even a very hectic – Christmas. But my faith is incarnational. God comes among us in the most humble of ways, which is very humbling.

He comes not as a prince, or a politician, or a rich celebrity, but comes among us in poverty, identifies himself with those who are on the margins and rejected, and died outside the city walls. Christmas is meaningless without Easter. But the meaning of Christmas is that God loves us, and calls us to love God and to love one another.

One of the poems I turn to at this time of the year is the poem ‘Christmas’ by the English poet, John Betjeman. This poem opens:

The bells of waiting Advent ring,
The Tortoise stove is lit again ...

But most people remember the lines that begin: ‘And is it true?’:

And is it true,
This most tremendous tale of all...

Canon Patrick Comerford is Priest-in-Charge of the Rathkeale and Kilnaughtin Group of Parishes, and lives in the Rectory, Askeaton. He blogs daily at www.patrickcomerford.com 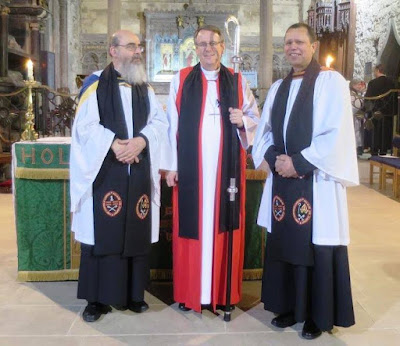 ‘ABC News’ is the Annual Magazine of Askeaton/Ballysteen Community Council Munitir na Tíre, and is edited by Teresa Wallace. This three-page interview is published in the latest edition, December 2017, pp 82-84

Posted by Patrick Comerford at 18:35