Charlie Comerford, a friend
and cousin who took my name
when he became an Anglican 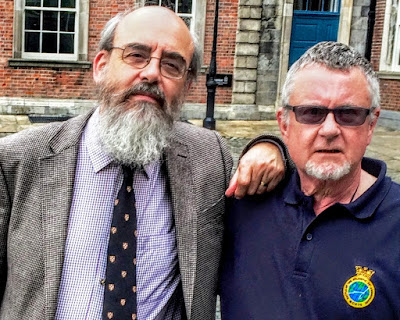 With Charlie Comerford in Dublin Castle in 2014 (Photograph: Bill Cross)

Charlie Comerford was more than a Facebook Friend. He became a real friend, he regarded me as his cousin, and when he became an Anglican and was received into full membership of the Episcopal Church, he asked me to be the equivalent of his godfather.

We became friends on Facebook over 7 years ago, in August 2010 through the suggestion of Rory Murphy in Bunclody, Co Wexford.

Charlie believed his great-grandfather was from Bunclody, although his birth certificate says he was born in New York, and we shared a lot of time trying to find our shared ancestors and links of kinship in Co Wexford.

Charlie’s interest in my family tree website quickly brought to reading my main website, and soon he was describing me as ‘my Anglican mentor and Comerford family genealogist!’

He rigorously read through my postings on theology, prayer, spirituality, liturgy and church history. He said his local Anglican parish priest, the Revd Robert Griner of Christ Church Episcopal Church, Newton, New Jersey, was ‘one of the two men who made an Anglican out of me … the other was distant cousin Patrick Comerford.’

He took my name as the equivalent of his ‘confirmation’ name when he was received into the Episcopal Church on 29 April 2012, by Bishop Mark Beckwith of Newark in Trinity and All Saints’ Cathedral, Newark. From then on, he gave his full name as Charles William Patrick Comerford, which was an honour and a privilege I would never have sought or requested.

Charlie frequently reposted my postings from Christ Church Cathedral, Dublin, and other churches, my posts on liturgy, church history, family history, travel and even some of my sermons, as well as postings from Lichfield and travel throughout England and Europe. He became an Anglo-Catholic in his expression of his Anlicanism.

‘I really enjoy reading about your range of activities, interests, and research,’ he told me, ‘you are a Renaissance man for certain.’

Eventually, we met two years later in Dublin on May 2014. He had a quick one-day visit with his friend Bill Cross from Liverpool, and we visited Christ Church Cathedral, Dublin Castle, including the Chapel Royal and the Throne Room, Trinity College Dublin, including the Book of Kells and the Long Room, and the Mansion House.

We found we shared a number of Facebook friends, including Father Peter Pearson. He was delighted when Norman Lynas, canon residentiary of Holy Trinity Cathedral in Hamilton, Bermuda, was a visiting preacher in his parish church and realised that we had been friends and colleagues in Ireland for many years, including serving together on the board of the Church of Ireland Gazette.

He recalled, ‘I asked if he knew my distant cousin, you, and he just beamed and said he knew you very well and you were doing important work.’ And he added: ‘That made my day!’

While we did not always see Irish history and politics in the same light, we certainly shared the same outlook on recent political developments in the United States. At the end November, he shared his pleasure that Archbishop Justin Welby of Canterbury had spoken out about American Christians who supported Donald Trump.

In September, he made a donation in my honour towards USPG’s work in the Caribbean, and told me: ‘Thank you so much for introducing me to this gentle spirituality. It literally changed my life.’

Charlie celebrated his birthday last month, on 8 November. But recently he was spending a lot of time at Memorial Sloan Kettering Hospital in New Jersey. He was treated for throat cancer and a chest lymph node and he visited thoracic surgeons, although he denied he was in any real physical pain.

Still ever hopeful, he was planning another trip to Ireland and Britain, and had hoped this would happen last month or this month, in late November or mid-December, visiting London and Liverpool, spending five days in Ireland, and visiting Dublin, Limerick and Askeaton.

However, his treatment was taking a greater toll than Charlie could know. There were CT scans every three months and a scope down his throat every two. There were some nodules in his chest, but he was still fully functional: ‘If you did not know what I have been through you could never tell by seeing me.’

His next chest scan was brought forward to early December from early January, and so the next trip was delayed. He was still hoping to see me in Ireland early in 2018.

Last weekend, he was taken into Morristown Hospital for pneumonia and with a bad pain in his left lung. He was moved to the ICU on Thursday, and his condition has worsened on Friday. The doctors were not sure what was wrong.

His condition worsened and there was no hope for improvement. Charlie died late on Saturday afternoon. His death was peaceful and he was surrounded by friends and family.

Many of his Facebook friends are numbed. Another Comerford has posted on his page: ‘I’m so sorry to hear this. I only know Charlie through Facebook because we share a last name and a mutual friend in Ireland. Likely related somehow. I always found him to be witty and interesting in his posts. My thoughts are with you during this terribly sad time. So sorry.’

This evening my sympathies are with his wife Mollie, who posted earlier today: ‘Charlie was the love of my life and I am devastated. I’ll post the arrangements once they’ve been made.’ 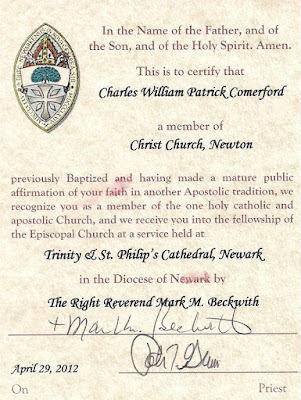 Patrick, this is an amazing and precious story you have shared. I imagine that this was not an easy blog-posting to write, but a valuable one.
I would venture that the intersection of your two lives was a KAIROS season, God's in-breaking at 'the right time'.
Grace and Peace in this time of Advent.
Roger.
United Methodist, permanent Deacon (Virginia, USA)

Patrick Chuck was so looking forward to us visiting Ireland again.

Saddened by his loss but know I will meet him again when I masks the same journey.

I first met Chuck in person on board HMS Belfast for Easter Activity Week I had made a large roast chicken dinner for about 12 people, Chuck brought his empty plate to the hat h in the galley and said "Bill you would make someone a wonderful wife" quick as as flash my reply knowing he had bad knees was "If that's a proposal of marriage you should be on a bended knee".!!! Much laughter went round and our friendship went from strength to strength.

Will mic his company for a while till we meet up again.
Bill Cross G0ELZ (Amateur Radio Call)