The benefits of learning
a new language go
beyond mere words 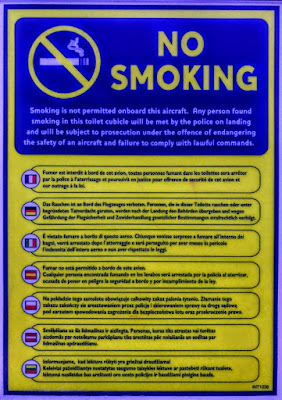 Saying it with meaning on Ryanair, in more ways than one (Photograph: Patrick Comerford, 2017)

One of the joys of travel is engaging in another language and being surrounded by languages I have never learned. Although its is almost 40 years since I was a student in Japan, I can still count to four in Japanese, exchange basic formalities like Good Morning, Please and Thank You, and still mimic some of the subway announcements I heard in the commuter rush in Tokyo.

At first, I used to take phrasebooks with me on every new venture. Eventually I gave up on this exercise in Europe when I found both Magyar or Hungarian and Turkish confusing and impenetrable.

But the experience of being surrounded by foreign languages begins these days long before landing in another country. I noticed on one recent flight, the variety in expressive uses of language on one ‘No Smoking’ notice.

While that notice says in English, ‘Smoking is not permitted onboard this aircraft,’ the French equivalent says, ‘Smoking is prohibited on this plane.’ Failing to comply with the law in English becomes an outrage against the law in French, and not showing respect for the law in Italian.

Wine and Drugs … perhaps something was lost in translation in Ravello (Photograph: Patrick Comerford)

Anyone who tries to learn another language knows it is not enough to learn the vocabulary and try simply to replace the words with their equivalent. Translation programmes such as Google Translate not only miss nuance and subtlety, but also miss out on beauty and grace. 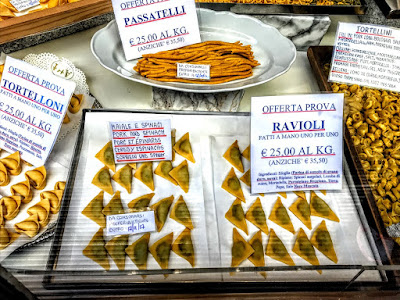 I should admit that I am not a linguist and I am not good at learning languages. I barely managed to scrape through with a pass on the pass paper in Irish in the Leaving Certificate, despite having spent a month in Ballinskellings in the Kerry Gaeltacht a few years before. But I sat four languages for the Leaving Certificate – English, Irish, Latin and Spanish – and later studied both Biblical and Classical Greek, which have minor uses when trying to order food and drink off a menu in modern Greek.

I grew up often hearing the phrase ‘the Greeks have a word for it.’ But sometimes in Greece I struggle to find the words for flowers and everyday fruits, although there is no need to – every Greek in resorts and shops speaks fluent English, and I speak very poor Greek. 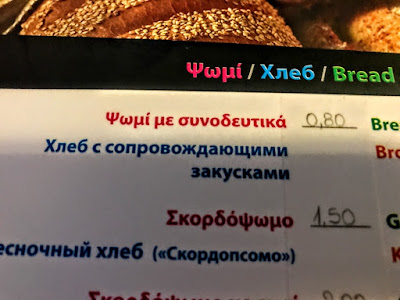 Starters on a Greek menu … not to be confused with a covering letter (Photograph: Patrick Comerford, 2017)

I try – but usually struggle, very badly – to read menus in restaurants in Greece in Greek and in Italian in Italy. But sometimes I can get it wrong, often with humorous consequences. One night last summer, in a restaurant in Crete, a menu opened with ψωμί με Συνοδευτικά (psomí me sinodeftiká). Why would I be interested in bread with a covering letter? But starters are also ‘little things brought together.’

School Latin and school Spanish provided basic tools for making sense of menus, signs, newspapers and even legal notices in a variety of other languages, including Romanian, Italian and French. But despite my poor abilities in learning a new language, I enjoy attempting in what must sound gibberish to make myself understood. 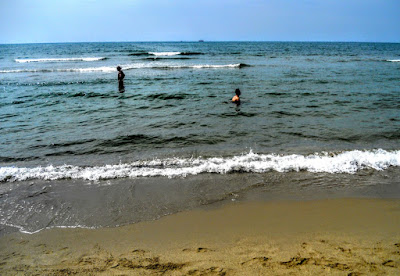 I got the wrong trains to and from Viareggio because of my bumbling Italian (Photograph: Patrick Comerford)

I never learned French at school. But on an early journey to Paris in my 20s, I was coached carefully and sent into a shop to buy a present. Hesitantly, I explained, ‘Excusez-moi, je ne parle pas français. Parlez vous anglais?’ I got a quick response that I knew immediately and instinctively meant, ‘I understand you perfectly, how can I help you in French?’ I blushed and was reduced to the conversational competence of a two-year-old, pointing and making silly sounds.

On one holiday, I insistied on making myself understood by rail staff who probably had better English than my Italian. I managed to get the wrong train – not just once, but twice … on the same day. Well, it was the right train, but on the first journey it was going in the opposite direction, and on the last journey that day I was going in the right direction, from Viareggio to Florence, but by another route that bypassed the stop I needed. 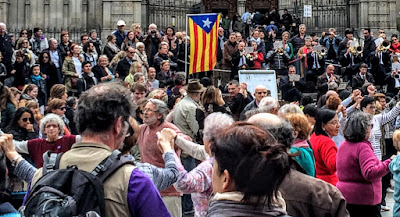 For Catalans in Barcelona, Spanish is often a foreign language (Photograph: Patrick Comerford)

On another occasion, I apologised in a restaurant in Barcelona, explaining that I did not speak adequate Spanish and had learned it in school, a long time ago. ‘Same here,’ came the response, ‘I don’t speak Spanish; I had to learn it in school too, but that was a long time ago. I speak Catalan.’ Restaurateur 1, Patrick 0.

The benefits of French 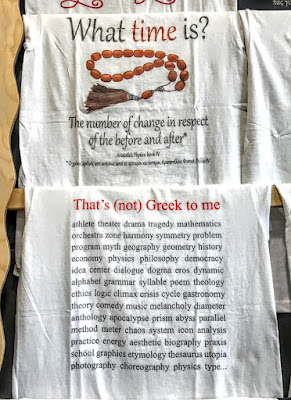 English is heavily indebted to Greek, French and other languages (Photograph: Patrick Comerford, 2017)

I was surprised on a train from Brussels to Bruges, as the language for announcements changed from French (Walloon) to Dutch (Flemish). After that early experience in Paris in the 1970s, I had expected Dutch sounds would be easier to the ear of an English-speaker.

English resembles French in more ways than we realise. About 20 to 25 per cent of English vocabulary is based on French; other estimates say about 60% of our English vocabulary comes either directly from French or through a Romance language, when we include words from Gaulish and Germanic languages such as Old Frankish. Until the late Middle Ages, French remained the language of the ruling class in both England and Ireland, while ordinary people continued to speak in dialects based largely on Saxon or Irish. 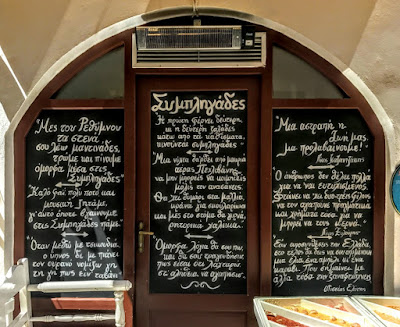 Which all goes to explain how we are talking about the same thing when we say someone else has a very rich Anglo-Saxon vocabulary but can ask of ourselves ‘Pardon my French.’

Whatever it is called, the food on holidays always seems to taste better (Photograph: Patrick Comerford, 2017)

While I was working as a journalist, I often enjoyed sitting around at the end of a working day with international colleagues, enjoying multilingual exchanges and conversations. We hardly needed to know precisely what someone else was saying, but we made up for linguistic weaknesses because of context, facial expressions, body language and the responses, whether in humour or in anger.

To this day, I can understand a lot more that is said to me in another language than I can say myself. 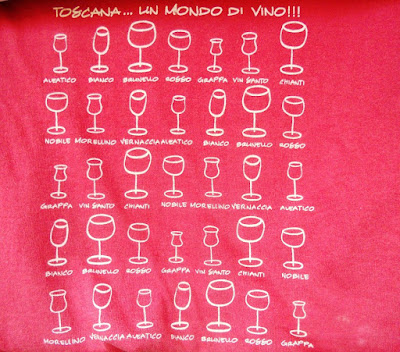 Many names and many words in Siena … but they all mean wine in Tuscany (Photograph: Patrick Comerford)

But the two European languages that have completely floored me are Hungarian or Magyar and Turkish.

Even reading road signs in long journeys across Hungary proved difficult. Although Hungarian is not an Indo-European language, it has many words from Slavic and Turkic languages, and from German too. But while the English alphabet has 26 letters, Hungarian has 44.

Hungarian has no grammatical gender, so while there is one pronoun (ő), there are no separate words for ‘he’ and ‘she.’ Instead of prepositions such as ‘from’ and ‘with’ in English, Hungarian has suffixes that are added to the end of main words. In this way, ‘From Budapest’ becomes ‘Budapestről,’ and ‘with Barbara’ in English becomes ‘Barbarával’ in Hungarian.

Another feature of Magyar is vowel harmony. In addition, the stress is always on the first syllable of words. 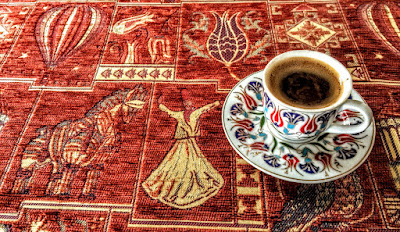 Coffee in Cappadocia … the word is loanword from Turkish (Photograph: Patrick Comerford)

For its part, Turkish is the most widely spoken of the Turkic languages, with 60 to 65 million native speakers in West Asia, mostly in Anatolia, and a further 10 to 15 million in south-east Europe, mostly in East and West Thrace, but also in significant numbers in Greece, Cyprus, Bulgaria, the Former Yugoslav Republic of Macedonia, Germany. Although Turkey is not a member state of European Union, Cyprus has already asked the EU to make Turkish an official EU language.

The characteristic features of Turkish include vowel harmony, agglutination, and, as with Hungarian, the lack of grammatical gender. 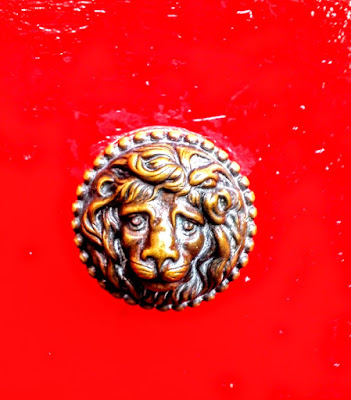 Despite these complexities, Turkish loanwords have been appearing in the English language since the late Middle Ages. They include Balaclava, Balkan, bulgur, caïque, cassock, coffee, doner kebab, kiosk, lackey, tulip, turquoise and yoghurt. Even Aslan, the lion in the Narnia chronicles by CS Lewis, takes his name from a Turkish loanword. 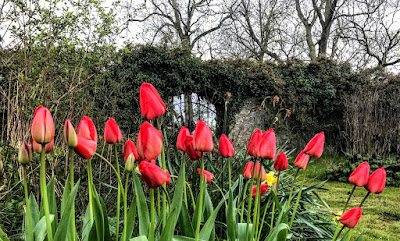 Tulips in the rectory garden in Askeaton … tulip is a Turkish loanword (Photograph: Patrick Comerford, 2017)

There is no such thing as a literal translation. Trying to translate poetry from one language into another is almost impossible. In the same way, idioms are rendered meaningless in translation. The Swedish saying ‘to slide on a prawn sandwich’ means to have an easy life. What would a non-English speaker think when I say something is as rare as hen’s teeth? … although the French say ‘quand les poules auront des les dentes.’

Trying to translate Biblical, theological and liturgical texts needs even greater subtlety and sensitivity given that people’s beliefs, faith and practice are involved.

A phrase like ‘saved by the skin of my teeth’ comes from a mistranslation of a passage in the King James Version of the Bible: ‘My bone cleaveth to my skin and to my flesh, and I am escaped with the skin of my teeth’ (Job 19: 20). The original phrase refers to the thin porcelain exterior of the tooth, rather than the gums. In other words, Job escaped with his teeth, but just barely. Job is comparing the narrow margin of his escape with the shallow ‘skin’ or porcelain of a tooth, the equivalent, I suppose, of a ‘hair’s breadth.’

We speak at times of the ‘wrath of God.’ But wrath is not a Biblical word, it is an Anglo-Saxon word. Yet Isaiah’s words would not have the same impact if they were translated as saying, ‘Behold the day of the Lord comes with irritation’ or ‘with pique’ (Isaiah 13: 9). 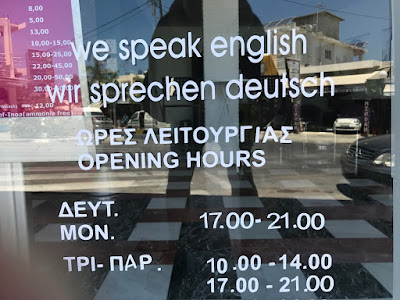 A hairdresser’s shop in Rethymnon … liturgy has many meanings beyond liturgical worship in Greece (Photograph: Patrick Comerford)

The Orthodox think many of the problems with Saint Augustine’s thinking derives from his distinct lack of knowledge of Greek. But one of the major divisive arguments in the Roman Catholic Church today is the imposition of a literal translation from Latin into English of liturgical texts, robbing them of their ability to be dynamic and poetic.

The word liturgy (λειτουργία, leitourgía) is Greek and means ‘the work of the people,’ referring even to the rowdy, the masses or the populace, and not just the polite people. But in Greece ‘liturgy’ is not necessarily a sacred word, and is neither technical nor purely theological. Supermarkets and shops in Greece have signs that regularly announce ‘Opening Hours’ as ores leitourgías (ώρες λειτουργίας) – the hours of service, or the hours for serving the public.

The story is told of a tourist who once asked whether there is a Greek word that translates mañana. The Greek who was asked the question thought long and pondered for a while on the word αύριο (avrio), but then replied: ‘Yes, but it does not convey the same sense of urgency.’

Everyday Greek has at least four different words for blue, so that blue can be seen by Greeks as four distinct colours. It is never too late to learn a new language. It can be enriching, and it could be a very exciting New Year’s resolution. 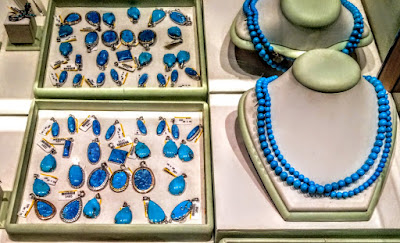 Turquoise jewelry on sale in Turkey, the land of turquoise (Photograph: Patrick Comerford)

This feature was first published in January 2018 in the ‘Church Review’ (Dublin and Glendalough) and the ‘Diocesan Magazine’ (Cashel, Ferns and Ossory). 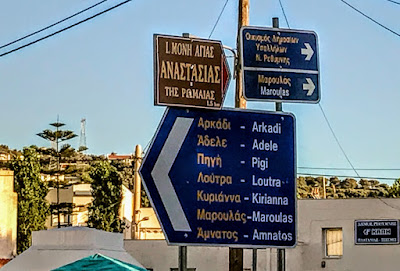 Which way to Maroulas? … signs can be confusing in any language (Photograph: Patrick Comerford, 2017)