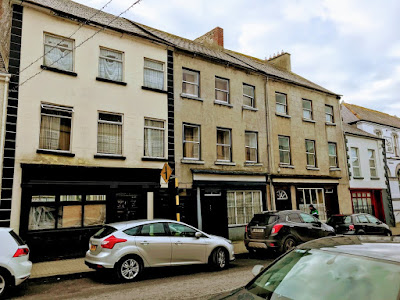 A terrace of three early Victorian shops on the south side of Main Street, Rathkeale (Photograph: Patrick Comerford, 2018)

Before the snow made it difficult to move beyond Askeaton at the end of this week, I had a working day in Rathkeale earlier this week that allowed me time to enjoy more of the town’s Victorian architectural heritage and legacy.

Three early Victorian houses and shops, with their shopfronts on the south side of Main Street, Rathkeale, are part of the architectural heritage of the town and they show how this was once the most important commercial and market town in West Limerick.

The house on the right in this terrace of three is a three-bay, three-storey house, built around 1840. This house was once in use as shop and it still has a shopfront on the ground floor, and it has lined-and-ruled rendered walls.

The shopfront has timber pilasters flanking the openings, a patterned architrave, a frieze and a cornice. The square-headed opening with a fixed timber window has timber mullions and a cast-iron sill guard. The square-headed door openings to each side have timber panelled doors and overlights, with a fanlight above the door on the left.

Above, the square-headed openings have one-over-one pane timber sliding sash windows. The house has a pitched slate roof with a rendered chimney-stack.

This house, which is one of three buildings of similar size and form, presents a regular and symmetrical façade to the Main Street in Rathkeale. Its architectural heritage merit is further enhanced by the retention of the timber sash windows and by the end chimney-stacks.

The shopfront still has its original design as well as its early glass and fittings.

The shopfront and house in the centre of this terrace is also a three-bay three-storey house from the same time, and this too retains its shopfront on the ground floor.

The shopfront here also has timber pilasters flanking the openings, and a supporting architrave, frieze and cornice. The square-headed opening has a fixed timber window with timber mullions and a cast-iron sill guard.

The ground floor has square-headed door openings side-by-side with timber panelled doors and over-lights, and one of these doors is incorporated into the former shopfront.

This house too has lined-and-ruled rendered walls and a pitched slate roof with a red-brick chimney-stack.

The third house has lost its original shop window and the timber sliding sash windows on the first and second floors. But it retains the interesting double-door in the shopfront.

These three former shops with their former shopfronts continue to present regular and symmetrical façades on the east end of the Main Street to the street. They retain many details of their original designs and fittings, and they continue to enhance the decorative qualities of the streetscape in Rathkeale. 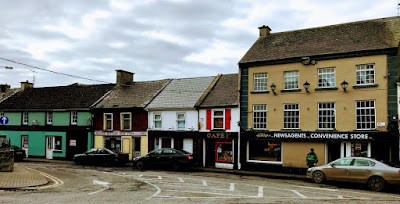