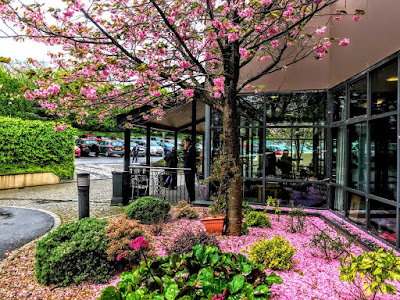 Cherry blossoms at the City of Armagh Hotel during a break at the General Synod this afternoon (Photograph: Patrick Comerford, 2018)

The 1878 Preface to the Book of Common Prayer declares: ‘And now, if some shall complain that these changes are not enough, and that we should have taken this opportunity of making this Book as perfect in all respects as they think it might be made, or if others shall say that these changes have been unnecessary or excessive, and that what was already excellent has been impaired by doing that which, in their opinion, might well have been left undone, let them, on the one side and the other, consider that men’s judgements of perfection are very various, and that what is imperfect, with peace, is often better than what is otherwise more excellent, without it.’

Bishop Harold Miller of Down and Dromore has said the ‘theme song’ of the 1878 Preface ‘is very much part of the psyche of the Church of Ireland’ when it states: ‘What is imperfect with peace is often better than what is otherwise more excellent without it.’

The General Synod of the Church of Ireland come to an end today with making decisions that some would have seen as perfect but that would have left us without peace.

Our judgments of what might be a perfect make of the General Synod are very various, as was obvious from the debates over the past few days.

A private members motion proposing the withdrawal of the Bill tahat sought to establish a proportional and representative formula for the allocation of seats in the House of Representatives and reduce its membership was passed in Armagh today [11 May 2018] after a very difficult debate on the Bill yesterday afternoon.

A private members motion, proposed by Sam Harper (Cashel, Ferns and Ossory) and seconded by Mrs Eithne Harkness (Armagh), was passed so that Bill No 7 was withdrawn. Standing Committee has been asked to consider the contents of the Bill and the proposed amendments and ‘with that focus return to the 2019 General Synod with a report and legislative proposals for decision by the Synod.’

Sam Harper said the decision was too important to make in a matter of minutes. The motion gives a year for the bill and the amendments to be considered by Standing Committee, and to come back next year to the Synod.

Eithne Harkness said there had not been time to reflect on ‘the consequences and unintended consequences and if the Bill goes forward today we will be denying ourselves that time. This Bill is in danger of being destroyed by weight of amendments.’

Lady Brenda Sheil (Down and Dromore) said that consultation and a sharing of views were important in a caring Church. This motion would allow Standing Committee to come back with carefully considered proposals with time to reflect and to consult.

Archdeacon Wayne Carney (Limerick and Killaloe) said the motion would help deal with the unintended consequences of the Bill. He said the Church of Ireland was balanced and there was a balance in General Synod, but he was worried that the Bill would reduce the balance of General Synod.

The Bill, as proposed by Andrew Brannigan and Canon Alison Calvin, would reduce the membership of the General Synod. Their proposed formula would have allocated the number of representatives according to the number of cures within respective dioceses subject to 2:1 laity/clerical representation. Six additional seats would be allocated to each diocese to proportionally increase the representation of smaller dioceses.

The move would have reduced the House of Representatives by 117 seats from the current 648 to 531.

Archdeacon Andrew Orr opposed the first reading of the Bill. He said that while few would argue that Synod did not need change, the Bill was passed it would be the most dramatic change to be introduced in the Church of Ireland since 1870 and yet there had only been a few short weeks to consider it.

He said there had been no consultation and that it had been dropped on members, with the smaller dioceses bearing the brunt. ‘We have not had the time to scrutinise them or see what the implications will be for any of the dioceses affected. Are we really going to change the governance of the diocese on the hoof, on a whim?’ he asked.

He said the question was ‘What is equitable?’ He argued that the principal should be not to move beyond a 60:40 split between the two provinces and holding the Church of Ireland together was important.

During the debate, I asked the proposers to withdraw the Bill considering the division it was causing. I said they had not consulted widely with the wider Church. Time was needed for Tuam, Killala and Achonry and Limerick and Killaloe to continue their discussions, and I said representation at General Synod was designed to allow voices from the smaller regions to be heard, and that it was not intended to be proportional representation.

Robin Newman (Cork, Cloyne and Ross) said the Bill would make the Church of Ireland partisan. He said General Synod should be pared down and suggested that as 40% of those elected do not attend so proposed reducing the house by 40% across the board. He added the Bill should come from Standing Committee rather than individuals.

Roger Boyd (Cashel, Ferns and Ossory) said that he came from a quiet church with a quiet voice. He said it was the same church as in Dublin and Armagh. ‘The proposal here today is that some of those quiet voices shouldn’t be heard and I worry about the why of that,’ he said.

Dean Maria Jannson of Waterford pointed out that the General Synod is not representative of people who could not afford to be at Synod, or immigrants, or people under 30. She urged members to look to the edges and to see those who are not represented and have no voices, to look at social integration and Christian outreach. ‘I want an imaginative Gospel led, brave Synod which looks to the future. There’s more to this Synod than numbers,’ she said.

George Woodman (Connor) warned that a smaller, tighter General Synod could be too easily controlled by lobby groups and parties wishing to put forward a slate. He said he had come to value the larger baggy Synod and suggested there was greater democracy. He said the Church of Ireland was divided and the Anglican Communion’s unity was under threat.

Now the debate goes back to Standing Committee. But, of course, that means another debate next year. Any proposal that comes to general Synod next year ought to be sent from there to the Diocesan Synods so that there is the fullest amount of consultation throughout the Church.