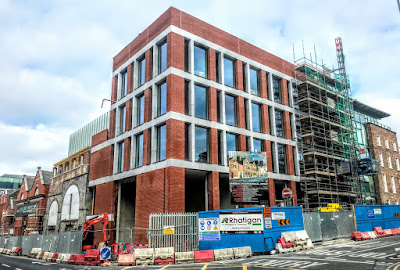 A sign on the corner of Lower Henry Street and Glentworth Street in Limerick advertises the advanced stage of the Gardens International Office, an office development that has been inspired by a lost but creative concept developed over two centuries ago.

William Roche created the Hanging Gardens of Limerick in 1808, a breath-taking series of tiered gardens between Henry Street and the back of his house on George’s Street, now 99 O’Connell Street, that he bought in 1804.

The Roches were a prominent banking and merchant family in Limerick at the turn of the 18th and 19th centuries.

William Roche’s unique gardens covered almost an acre, reached 70 feet into the air, and produced exotic fruits, beautiful flowers and an extensive range of vegetables, on terraces over vast vaulted storehouses that were used as stores.

The terraced gardens on arched vaults were developed by William Roche in 1808. The old limestone-faced building with red-bricked internal barrel vaults was a revolutionary project for its day. It was designed with a sophisticated heating and irrigation system to support roof-top hanging and vertical gardens with vegetation and fruits then regarded as exotic.

The series of arches ranged in height from 25 to 40 feet. The elevated terraced or hanging gardens were created on top of these arches, and the whole structure was crowned by classical statues.

The work cost £15,000 to complete and involved sophisticated heating and irrigation systems to maintain the vegetation.

At the top level were oranges, grapes, peaches and pineapples. On the middle tier there were hardy vegetables and fruit trees, and there were flowers at the bottom level. One section was devoted to melons and cucumbers, and flights of stairs led from one level to the next.

Roche’s Bank survived a baking crisis in 1820, but it was eventually taken over by the new Provincial Bank, which opened a branch in Limerick in 1825.

William Roche was an active supporter of Daniel O’Connell and Catholic Emancipation, and in 1832 he was elected MP for Limerick. He died on 27 April 1850, and his gardens fell into decline after his death.

At the end of the 19th century, the Revd James Dowd, in his book Limerick and its Sieges (1890), described the gardens as ‘a curiosity … without a parallel in in the empire.’ But by then the gardens were no more than a memory in Limerick. 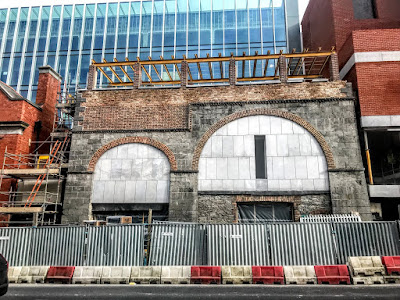 Today only two bays of the store and substantial parts of the original vaulting that supported the terraces are still intact.

This two-bay, two-storey structure, which can still be glimpsed in midst of the current development work had a roof structure that was concealed behind a parapet wall at the front and on the sides.

The red-brick parapet wall stands on a limestone stringcourse above a red-brick, dog-tooth course, and there were barrel vaults at first-floor level.

Although Roche’s ‘Hanging Gardens’ are now long gone, the legend lives on, and the vision that inspired Roche is being invoked in the Gardens International development on Henry Street.

The Henry Street site was part developed during the boom, but it then remained a shell development and an eyesore for several years. Now the 100,000 sq ft office development in the centre of Limerick is one of the key projects in the €500 million Limerick 2030 economic plan.

The plan sets out a strategy embracing three city-centre sites with the expectation of creating 5,000 jobs within five years. The plan provides for the development of a number of sites, including the Opera Centre near Patrick Street, which plans the creation of a third-level campus with hundreds of students from the University of Limerick Institute of Technology and Mary Immaculate College moving into the city centre to study and live.

Other ideas include a new world rugby experience in the heart of the city on O’Connell Street and developing the area in King’s Island that includes King John’s Castle and Saint Mary’s Cathedral.

Work on the Gardens International Office on Henry Street involves an investment of €17.6 million. The centre will offer space for up to 750 workers, with the hope that the Gardens will trigger a new wider programme of investment in infrastructure for Limerick.

Denis Brosan, who chairs Limerick 2030, sees the Gardens development as the catalyst for a new era of growth for Limerick. One of the main goals of the Limerick 2030 plan is to ensure the city centre fulfils its economic potential by becoming a desirable place in which to do business. 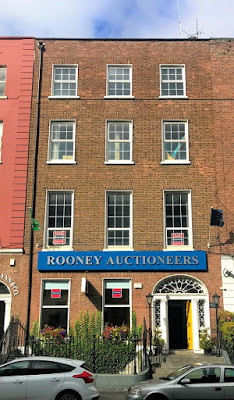