Lifting the Liam McCarthy Cup
at celebrations in Askeaton 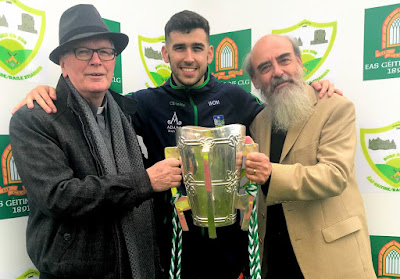 I lifted the Sam Maguire Cup in Ardagh when the All-Ireland Football Cup was brought to Ardagh in west Limerick ten days ago [21 September 2018] as part of the 150th anniversary celebrations marking the discovery of the Ardagh Chalice and the Ardagh Hoard in 1868.

But I got to lift the Liam MacCarthy Cup yesterday when members of the winning Limerick team brought the All-Ireland Hurling Cup to Askeaton yesterday [30 September 2018].

Earlier in the day, the cup was in Saint Mary’s Church (RC), Askeaton, for the Memorial Day Mass. And when the cup was brought to the GAA Field, near the Rectory, there was an opportunity to lift the cup with my neighbour and colleague, Father Seán Ó Longaigh, Parish Priest of Askeaton, and Willie O’Meara, who plays full-back on the Limerick winning team and on the Askeaton team.

The Liam MacCarthy Cup – sometimes called the Liam McCarthy Cup – is the All-Ireland Senior Hurling Championship cup. It was first won by Limerick in 1923 in the delayed 1921 All-Ireland hurling final.

The original 1920s trophy was retired in the 1990s, and a new identical trophy has been played for since 1992. The original cup is in the GAA Museum in Croke Park.

Kilkenny hold the record for winning the cup on the most occasions. Kilkenny held the All-Ireland title for four consecutive years from 2006 until 2009. 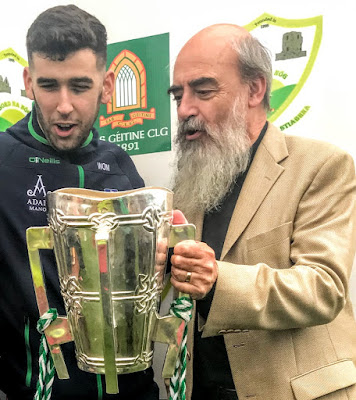 What’s in there? … With Willie O’Meara and the Liam MacCarthy Cup in Askeaton on Sunday afternoon

The original Liam MacCarthy Cup commemorates Liam MacCarthy (1853-1928). William (Liam) MacCarthy was born in Southwark, London, on 21 May 1853 to Irish parents who had emigrated from Ballygarvan, Co Cork. His father, Eoghan MacCarthy, was known as Capall (‘horse’) MacCarthy because of his great strength. His mother, Brigid, was from Bruff, Co Limerick.

A young Liam MacCarthy played hurling on Clapham Common and Irish was the first language in the family home. He first worked as a blacksmith’s hammerman and then as a signals’ fitter on the railways. He married Alice Padbury (1852-1928) in Saint George’s Cathedral, Southwark, in 1875, when he was 22, and they had four sons.

His wife’s family owned a fancy box factory on Blackfriars Road, Southwark, and Liam joined the family business. A few years later he set up a cardboard box factory in the family home. The box-making business prospered and moved to Haymerle Road, Peckham, where it was called Saint Brigid’s Works, named after his mother.

He was prominently involved in setting up a GAA county board in London in the 1890s, and was chair of the London GAA county board from 1898 to 1907. Other members of the board included Michael Collins and Sam Maguire, who succeeded him in the chair in 1907. MacCathy chaired the board again from 1909 to 1911.

The family had moved to Forest Hill Road, East Dulwich, and in 1900 Liam MacCarthy was elected in the Peckham North Ward to Camberwell Borough Council. He was a member of many council sub-committees, including those involved with Public Health, Libraries and Sick Benefit, and he kept his council seat for 12 years.

With two of his sons, he commissioned a trophy in the form of a mether or mediaeval Irish drinking cup in 1920. This cup was offered to the GAA central council in Croke Park and since then was presented to the winners of the All-Ireland Senior Hurling Cup.

His cup replaced the Great Southern Cup as the All-Ireland trophy, and was first won by the Limerick team that defeated Dublin 8-05 to 3-02 in the 1921 All-Ireland Hurling Final. It had been delayed because of the Irish War of Independence and the Civil War that followed and was played on 4 March 1923.

Liam MacCarthy were horrified by the Civil War that followed Irish independence. He died a poor man in 1928, the year the Sam Maguire Cup was presented to the GAA for the All-Ireland Football Cup. MacCarthy was buried in an unmarked pauper’s grave in Dulwich Cemetery. A headstone was only erected over his grave 1996, and to this day he has no memorial in Ireland.

Meanwhile, the original Liam MacCarthy Cup was retired in 1992, when Tipperary was the last country to claim the original. An exact replica was produced and has been awarded on an annual basis since then. Kilkenny was the first team to win the new MacCarthy Cup. The replica was crafted by James Kelly in Kilkenny.

The first title win for Limerick was in November 1898, when the 1897 final was won by Kilfinane in Tipperary town. The second title came in 1918, just 100 years ago, when Newcastle West were winners. Limerick’s third title was won in 1923, when Limerick became the first winners of the Liam MacCarthy Cup in the delayed 1921 final. Limerick won a fourth All-Ireland title in 1934.

It was the beginning of the Mick Mackey Era, Limerick was the winning team again in 1936, and he was the captain in 1940 when he won his third All-Ireland medal and Limerick won a sixth title.

This year, a young Limerick team defeated Galway 3-16 to 2-18 in the All-Ireland Hurling Final in Croke Park on Sunday 19 August and after 45 years brought the Liam MacCarthy Cup back to Co Limerick, the home county of Liam MacCarthy’s mother. 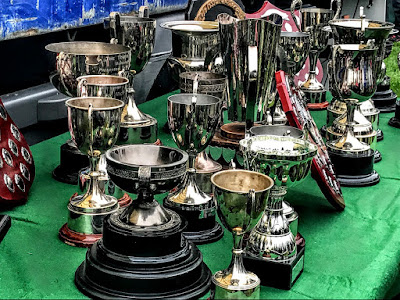 An array of cups and trophies in the GAA Field in Askeaton on Sunday afternoon (Photograph: Patrick Comerford, 2018)