After a busy Sunday morning in Askeaton and Tarbert, two of us took the afternoon off, ahead of another busy week with a round of meetings in Dublin, London, Lichfield and Birmingham, and went for lunch in Ballybunion, Co Kerry, followed by a long walk on the beach.

In this part of south-west Ireland, winter has already settled in, and we had discussions this morning about arrangements for carol services next month and the round of Christmas services later in December.

But today, the temperatures were a little higher than normal, reaching 12 or 13 on many occasions in the afternoon, and the skies were a clear blue throughout the day.

The beach in Ballybunion faces west, and so, as we walked the long sandy shoreline, we were walking into the bright rays cast by the slowly setting late afternoon sun.

It was a busy summer in Ballybunion. But now it is without crowds and the hustle and bustle of summer amusements, entertainments and holidaymakers. A group of bikers were the only noticeable arrivals, and local people seemed to be taking the opportunity to enjoy having the beach to themselves.

At times in the still of the afternoon, it was like walking on a beach in Crete in late autumn.

The mobile homes and caravan parks have closed up for winter, and even the Daroka restaurant, which has become a favourite place for Sunday lunch, has taken the opportunity of this time of stillness and calm to take a few weeks off.

We returned through Listowel, Athea, Ardagh and Rathkeale to Askeaton. Along the way, the waxing moon was hanging over the countryside long before the sun set. And even when we got back to the Rectory, the night sky was a deep but clear blue, waiting to be arrayed and bedecked in stars and constellations. 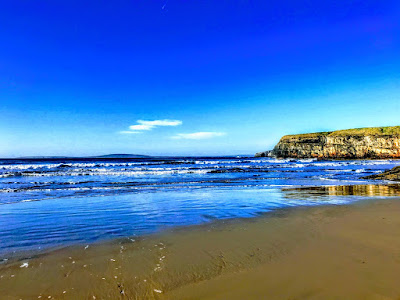