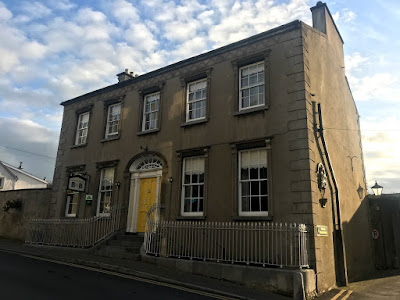 John Street, leading from the former Cashel Palace Hotel on Main Street, Cashel, to the Church of Ireland Cathedral of Saint John the Baptist and Saint Patrick’s Rock, is lined with elegant Georgian townhouses.

Once built as residential homes for the rising professional, middle class of Cashel at the height of town’s prosperity, when the Co Tipperary town had a rich cultural life, many of these Georgian townhouses have been converted into suites of offices and waiting rooms for doctors, lawyers and accountants, while others now offer chic or boutique Bed and Breakfast accommodation.

For more than a decade, Ashmore House has been welcoming guests for bed and breakfast accommodation in Cashel Town. It is the home of the Ryan family, although, sadly, Brendan Ryan of Ashmore House died earlier this year [25 July 2019].

Ashmore House is detached, five-bay, two-storey house over a half-basement, built on this corner-site ca 1830 and with extensive gardens at the rear, reached through an elliptical-headed carriage arch.

The façade of the house is enlivened by decorative features, including the frieze, quoins and render surrounds. Its form is enhanced by the sweeping steps and central doorway, whose decorative fanlight and elaborate doorcase make it a very notable feature on John Street.

The house is approached by flight of limestone steps with sweep walls and decorative cast-iron railings that continue to form the boundary of the basement area.

There are rendered walls with render quoins and a decorative render frieze with a pear-drop motif. An interesting feature north-west gable or William Street side of the house is the render and timber religious plaque showing the Virgin Mary and Christ Child, and with a render hood-moulding.

Ashmore House is a large and a prominently-sited house and it remains an imposing feature on the streetscape of Cashel close to the cathedral. 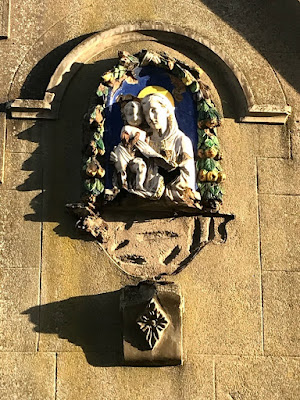 The plaque on the William Street gable of Ashmore House (Photograph: Patrick Comerford, 2019)