‘The Back of the Pipe’:
a Victorian fountain on
Cashel’s Main Street 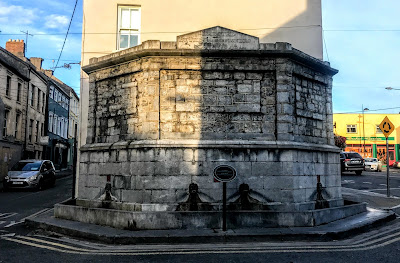 ‘The Back of the Pipe’ on Main Street, Cashel, was erected by the Town Commissioners in 1842 (Photograph: Patrick Comerford, 2019)

One of the unique and eye-catching features on the streets of Cashel, Co Tipperary, is the 1840s fountain known as ‘The Back of the Pipe’ on Main Street.

The Victorian fountain was erected by the Town Commissioners of Cashel in 1842 to provide a supply of clean water to the town and was one of the first public works by the new Town Commissioners, set up by Act of Parliament in 1840 to replace the old corporation.

When the fountain at the Back of the Pipe was first erected near Moore Lane, it was designed to disgorge clean water through the mouths of the gargoyles or lions into a separate stone trough.

This half-octagonal-plan fountain, built of limestone, is attached to the south-west gable of a building. It has an artificial slate roof with a carved stone cornice and a pedimented date plaque (1842).

The form and function of the fountain adds variety to the streetscape of Cashel and the textures and materials provide further visual interest. It displays fine stone crafting, and the date plaque and cast-iron lion-heads add decorative interest.

The ‘Back of the Pipe’ has a dressed stone base with a cut stone plinth. A cut-stone string course separates the base from the upper snecked stone walling. The walling has roughly dressed stone pilasters and raised rectangular stone panels.

The cast-iron lion-head or gargoyle spouts at the base of the fountain were designed to feed water into the continuous trough reflecting the plan of fountain.

The fountain was restored in 1986, when it was converted into a decorative fountain.

Cashel also has an earlier well that gives its name to Ladyswell Street, and a fountain in the Hiberno-Romanesque style erected at Lower Gate Square by the people of Cashel in 1904 as a tribute to Dean Thomas Kinane (1835-1913). 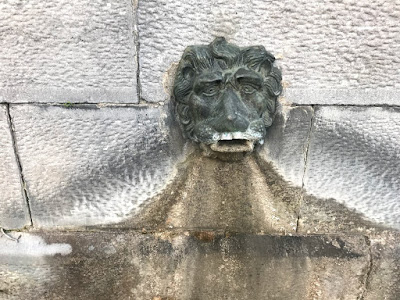 One of the cast-iron lion-head or gargoyle spouts at the base of the fountain (Photograph: Patrick Comerford, 2019)