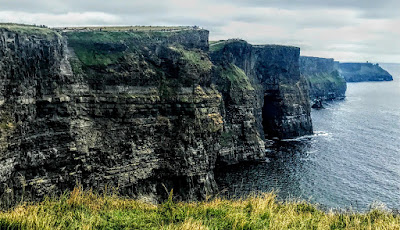 The Cliffs of Moher are one of the most visited tourist sites in Ireland (Photograph: Patrick Comerford)

At their southern end, the Cliffs rise 120 metres (390 ft) above the Atlantic Ocean at Hag’s Head, and reach their greatest height – 214 metres (702 ft) – just north of O’Brien’s Tower, and then continue at lower heights, always with the edge abruptly falling away into the churning Atlantic below.

Local stories remember O’Brien as a man ahead of his time, who believed the development of tourism would benefit the local economy and bring people out of poverty. It is said locally he ‘built everything around here except the Cliffs.’

When O’Brien built the tower, he planned it as an observation tower for hundreds of tourists who then visited the Cliffs of Moher, so they could see out to the Aran Islands.

The nearest village, Doolin, is a popular departure point for the Aran Islands and also the village that is at the heart of Irish traditional music. Doolin is a seaside village on the north-west coast of Co Clare, surrounded by the rugged in Burren district and facing out to the Aran Islands and the Atlantic Ocean.

Doolin was once a fishing village, but today it is a base for exploring the Cliffs of Moher and the Burren. It is a busy place in the summer months, with people catching ferries to the Aran Islands or boarding boats for tours of the Cliffs of Moher.

Most of the activity in Doolin takes place in the original areas of Fisher Street and Roadford. The harbour at Doolin is the departure point for boat trips to the Aran Islands and the Cliffs of Moher, and also for trips to Doolin Cave. The Great Stalactite in Doolin Cave measures 7.3 metres. When it was discovered in 1952, it was recognised as the longest stalactite in the Northern hemisphere. 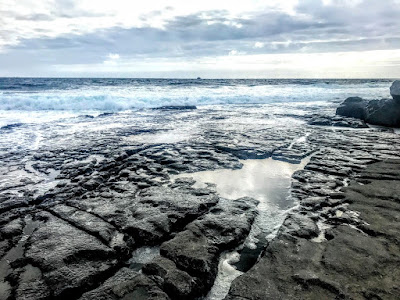 Rocks on the coast at Doolin … the harbour offers ferries to the Aran Islands in Galway Bay (Photograph: Patrick Comerford, 2019)