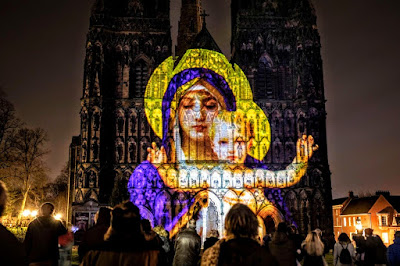 ‘The Beginning’ … one of the images projected onto to the West Front of Lichfield Cathedral before Christmas by Luxmuralis as part of ‘The Cathedral Illuminated 2019: The Beginning’ (Photograph courtesy Kathryn Walker / Luxmuralis, 2019)

The Second Sunday of Christmas (Christmas 2)

Instead of a Psalm this morning, we read from the Wisdom of Solomon (Wisdom 10: 15-21), in which we are told that Wisdom has delivered God’s people from oppressive overlords, guiding them by day and by night, so that even the mute and small children could no longer be silent, but sing out God’s praises.

Sometimes, I have to admit, that when I am travelling through London, I get lost, not because I do not know my way around London, but because I am colour blind, and I find it easy to get lost when I am reading the maps for the London Underground.

Colour-blindness is usually genetic, and usually only effects men.

I only came to know about it in my case after I was disappointed with not getting the marks I expected in Art in the Leaving Certificate.

It is not a sickness, it is not going to be cured, but when it comes to finding my way around the Underground, it is a disability.

Never mind the gap, I can see that. I just find it difficult to tell the Piccadilly Line from the Northern Line, Victoria from Piccadilly, and Waterloo and City from Victoria.

Before you could figure out how many Cs and how many Ls there are to spell Piccadilly, I am heading off on the wrong line, in the wrong direction, to I don’t know where.

It’s not a disability that is crying out for help, compared to what others go through with in life.

Actually, I prefer to walk, and sometimes I find it quicker and more pleasant.

But when I use the Tube, I have learned to have enough wisdom and enough humility to ask people to help me to read the maps and to point out which line is which.

There is nothing wrong with falling back on either wisdom or humility. And it makes for interesting conversations.

Our way of seeing colours is conditioned not just by colour-blindness and the different forms of it, or our lack of it, but also by our language, our culture and our politics.

Politics? Yes. Every time I see Trump wearing a red tie and Obama a blue tie, I wonder do they know the political significance of these colours in America is reversed everywhere else in the world. Throughout Europe, Green has a particular significance that is sometimes very difficult for the Green Party to explain in Northern Ireland. Try explaining in Northern Ireland how the words ‘Orange’ and ‘Revolution’ came together in Ukraine 15 years ago (2004-2005).

Culturally, although we have words for violet, purple and indigo in English, and know they are separate colours, we find it very difficult to distinguish them in our culture and to tell the difference between them.

Newcomers to learning classical Greek sometimes stumble at Homer’s reference to the wine-red sea (οἶνοψ πόντος, oinops pontos). We traditionally think of the sea as blue, although James Joyce gives it a particularly nasal shade of green.

Modern Greek has at least four different words for blue:

And then there is τυρκουάζ (tyrkouáz) for turquoise, and other words too.

Since I started to learn to speak Greek, I can honestly say that I now see different blues as different colours rather as than different shades.

Yet a language that has at least four words for blue has to borrow from English the words for grey (γκρί) and brown (καφέ).

On the other hand, we don’t have separate words for different blues. Every time we want to be definitive about blue, we have to qualify it: royal blue, sea blue, sky blue, baby blue … and so on … we could even be singing the Blues or feeling the Blues.

Colours are not fixed. How we see colours is a combination of light or light waves and cultural conditioning.

In our Gospel reading (John 1: 1-18), we read how the light of Christ fully reveals God’s ways, and through Christ we have been given access to God the Father:

‘What has come into being in him was life, and the life was the light of all people. The light shines in the darkness, and the darkness did not overcome it… The true light, which enlightens everyone, was coming into the world’ (John 1: 3-5, 9).

X-ray light allows doctors and medics to see inside our bodies: bones, organs, tumours, the workings of our muscles and joints … it is truly beautiful, but not a beauty we would want to see every hour of every day.

Artists work with different lights. They show their subjects in a light that we would not use consistently throughout the day.

We need dark and shade to see and experience the light.

All are different forms of light, and we see each other in a different light, at different times, depending on the time and circumstances.

Imagine if we all saw each other in the same light, constantly.

We would be a very boring, monochrome collection of people.

If only for a moment we could see one another in the light of God, the true light, which enlightens everyone, which was coming into the world that first Christmas.

That would make more than a shade of difference to the world. 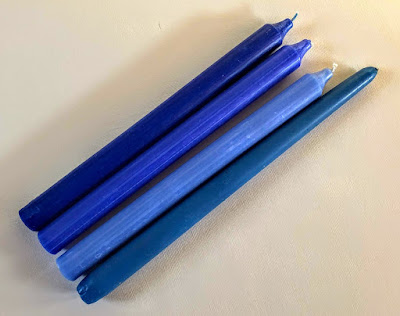 How we use language determines whether we see different shades of blue or different colours … four candles used as a sermon illustration (Photograph: Patrick Comerford, 2019) 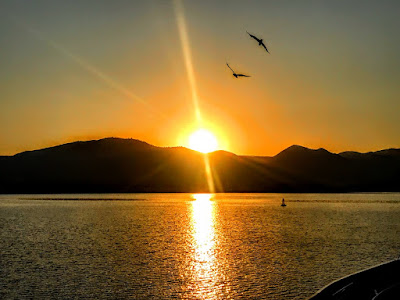 ‘The light shines in the darkness, and the darkness did not overcome it’ … sunrise over the coast at Igoumenitsa in northern Greece (Photograph: Patrick Comerford, 2019)

‘The light shines in the darkness, and the darkness did not overcome it’ (John 1: 4) … sunrise over the River Slaney at Ferrycarrig, Co Wexford, creates different shades of blue (Photograph: Patrick Comerford, 2019)