Four Victorian weddings
and a funeral 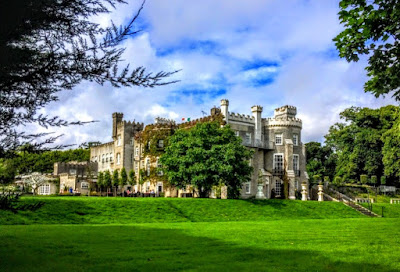 Bellingham Castle is now a romantic wedding venue and hotel between Drogheda and Dundalk, and the 19 luxury bedrooms include the sumptuous Bute Suite that recalls one of those four society weddings over a century ago (Photograph: Patrick Comerford)

Four weddings and a funeral in one family circle provide telling stories of how Irish society was changing at the end of the Victorian and Edwardian eras, in the decades immediately before World War I and the Easter Rising in 1916.

The first wedding took place secretly in 1870, when Lady Blanche Noel (1845-1881) married her music teacher, the Irish-born Thomas Murphy. She was born Lady Blanche Elizabeth Mary Annunciata Noel, at Exton Hall in Rutland on 25 March 1845, and at her baptism she was a godchild of Queen Victoria.

Her baptismal names illustrate how her parents were deeply influenced by the Tractarian movement. Her father, Charles Noel (1818-1881), second Earl of Gainsborough, was a prominent Whig politician who embraced Roman Catholicism in a very public conversion in 1850. Her mother, the former Lady Ida Hay, was a cousin of Queen Victoria and one of her bridesmaids; and her grandmother, Lady Elizabeth FitzClarence, was an illegitimate daughter of King William IV.

Lady Blanche and her sister, Lady Constance, were received into the Catholic Church by Pope Pius IX on New Year’s Day 1850. As a child, Blanche was schooled privately, learning Italian, French, German and Spanish, and some Latin and Greek, and travelling through Italy and Germany. After her mother’s death, she was left to her own teenage ways at the family home, Exton Hall. She sang in the choir in the family’s private chapel, and had daily music and signing lessons from Thomas Murphy, the young, tall, well-educated and handsome Irish-born organist in the chapel who was also the private music tutor to the Noel sisters.

In their hours together in the chapel after Matins and Vespers, Blanche and Thomas fell in love. Lord Gainsborough was aware of nothing until a visiting friend noticed their intimacy. In his indignant disapproval, one story says, he allowed the marriage to take place in his private chapel; another account says the couple eloped to London where they married, and that Blanche was disowned and disinherited by her father.

It is likely Gainsborough objected not because Murphy was Irish but because he was a commoner who brought no titles or estates into the family. Whatever his objections, Blanche and Thomas were married in the chapel at Exton on 6 March 1870. But one of Gainsborough’s conditions for consenting to the wedding in his chapel was that the couple should immediately leave England. The love-struck pair sailed for America and Blanche never saw her family again. There is little truth to the story that they travelled in the steerage compartment, and that when they arrived ‘she and Murphy bummed around New York. They had no money and hadn’t eaten for 24 hours. She sold her earrings for a loaf of bread and said it was the best meal she ever had.’

The couple settled in Bartlett, New Hampshire. There, Murphy taught music and French at a boys’ school and was the organist in a local church, while Blanche earned a reputation as a writer with magazine essays, short stories and travel logs. Gainsborough appears to have had regrets eventually about the way he treated his daughter. In 1874, he provided her with an annuity of £60, and invited her back to Exton Hall – if only she left her husband.

Blanche accepted the annuity but refused her father’s conditions for her return to Exton. She was not present for a second family wedding in the same chapel in 1874, when her sister Lady Constance (1847-1891) married a more acceptable Irishman, Sir Henry Bellingham (1846-1921). The Bellinghams were once a powerful and influential family in Co Louth, and for over 100 years, without interruption, a Bellingham sat in the Irish House of Commons as MP for the county. At Oxford, Sir Henry, who became the fourth baronet, became a friend of Cardinal Newman and Cardinal Manning, and while he was still in his 20s he made a very public conversion to Roman Catholicism in 1873, a year before his marriage.

Nor was Blanche present at a third family wedding in 1880, this time in Ireland. Her widowed brother, Charles Francis Noel (1856-1926), by then known as Viscount Campden, married Mary Elizabeth Dease in Coole, near Castlepollard, Co Westmeath. Unlike Blanche and her Irish husband, Charles and his Irish bride returned to live at Exton.

In New Hampshire, Blanche had a reputation for feeding and clothing local poor children. The couple had no children, and Blanche died just four days short of her 36th birthday after four days illness; she had remained a fervent Catholic all her life. Her funeral took place on 24 March 1881 in the Catholic Cathedral in Portland, Maine, and she was buried temporarily in a vault in the Calvary Cemetery before her body was brought back to England and buried beside her mother in the Noel crypt in Exton.

Gainsborough, who had remained a widower, died on 13 August 1881 a few days after Blanche had been reburied in the family crypt. On his deathbed, he agreed that Thomas should continue to receive Blanche’s small annuity. He was 62 and was buried beside his wife in the crypt. His titles and estates passed to his eldest son, Charles, who had married Mary Dease the previous year.

Thomas Murphy moved first into a boarding house and then to Boston, where he died on 11 October 1890. He was buried alone at Calvary Cemetery. His younger sister-in-law, Lady Ida Noel, who had become a nun as Mother Mary Emmanuel, also died that year. His other sister-in-law, Lady Constance Bellingham, died at Bellingham Castle a year later in 1891.

In 1895, Henry Belligham married his second wife, another prominent English Catholic, Lelgarde Harry Florence Clifton. But he still grieved Lady Constance, and in 1902, when a 200-year-old great royal oak at the castle gates fell in a storm he had it carved for the Calvary erected in her memory at the gates of Bellingham Castle.

The fourth society wedding in the family circle was celebrated in 1905, when Henry’s younger daughter, Augusta, married John Crichton-Stuart, fourth Marquess of Bute, then said to be the wealthiest man on these islands. The Princess Maud, a chartered steamer, took the guests across the Irish Sea to the harbour at Annagassan, Co Louth, for the wedding at Bellingham Castle. Even the bride’s sister Ida, who had become a nun in England as Mother Mary Emmanuel, was present at the wedding.

But when the wedding party and guests left as they had arrived, by steamer from Annagassan, the Edwardian world they left behind was falling apart, never to be put together again. Within a decade, World War I had broken out and the events were already in train that would lead to the Battle of the Somme and the Easter Rising in 1916.

Exton Hall remains the home of the Noel family; the chapel where Lady Blanche and Lady Constance married their Irish husbands is a unique Catholic niche in the country house wedding market in England. Bellingham Castle is now a romantic wedding venue and hotel between Drogheda and Dundalk, and the 19 luxury bedrooms include the sumptuous Bute Suite that recalls one of those four society weddings over a century ago.

This paper was first published as Chapter 47, ‘Four Victorian weddings and a funeral’ in Marriage and the Irish: A miscellany, edited by Salvador Ryan (Wordwell: Dublin, 2019, 283 pp), pp 163-165