Calatrava’s architectural
masterpiece in Valencia
triumphs over all criticism

On my first day in Valencia last week, I naturally went in search of the cathedral, some of the historic churches, and the heart of the city’s former Jewish quarter.

But, perhaps, the most interesting area to visit from an architectural point of view came on the second day when I spent a morning at the City of Arts and Sciences or Ciutat de les Arts i les Ciències.

This cultural and architectural complex covers 350,000 square metres on the former riverbed of the River Turia. It is one of the best-known works by Valencia’s world-renown architect Santiago Calatrava, and although it has not been without its controversies, it has become the most important modern tourist destination in Valencia and is one of the ‘12 Treasures of Spain.’

The other 12 treasures include the Mosque-Cathedral of Cordoba, Seville Cathedral, Alhambra in Granada, the Cathedral of Santiago Compostela, and Gaduí’s Sagrada Familia in Barcelona.

The architect Santiago Calatrava, who was born in Valencia in 1951, is known world-wide for his public projects such as bridges, stations, museums and stadiums skills in painting and sculpting. He worked on the Ciutat de les Arts i les Ciències in Valencia with the Madrid-born architect Félix Candela (1910-1997), who designed the underwater city L’Oceanografic.

After a catastrophic flood in 1957, the former riverbed of the River Turia which was drained and rerouted, and the old riverbed was turned into a picturesque, sunken park. 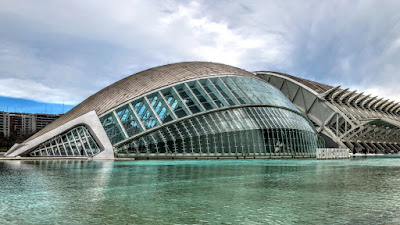 L’Hemisfèric, the first building in the complex, was completed in 1998 and is centrepiece of the complex (Photograph: Patrick Comerford, 2020)

The City of Arts and Sciences was designed by Santiago Calatrava and Félix Candela. The first stages of the project began in 1996, and it was inaugurated in 1998 with the opening of L’Hemisfèric. The last major component of the City, el Palau de les Arts Reina Sofia, was inaugurated in 2005.

The centrepiece of the complex is L’Hemisfèric, completed in 1998. The building includes an IMAX cinema, a planetarium and a laser show.

The building, with a surface of 13,000 sq m, resembles an unblinking, heavy-lidded, giant eye, or the ‘eye of knowledge.’ Its design resembles an eyelid that opens to access the surrounding water pool. The bottom of the pool is glass, creating the illusion of the eye as a whole. The dome or the iris of the eye is a theatre. 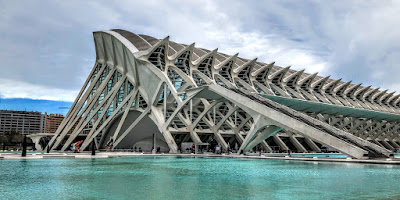 El Museu de les Ciències Príncipe Felipe opened in 2000. This is an interactive museum of science and stretches like the giant skeleton of a whale within the city. It occupies around 42,000 sq m on three floors, including 26,000 sq m of exhibition space, the largest in Spain. 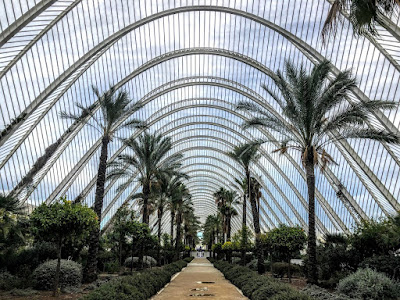 The landscaped walk at the top of L’Umbracle (Photograph: Patrick Comerford, 2020)

L’Umbracle (2001) is a 320 m long, 60 m wide, portal that links the buildings in the park, but it also includes a car park and offices. On top of this building, a landscaped walk includes 55 fixed arches and 54 floating arches that stand 18 m high, like a feathery ribbed roof.

Here is a collection of plants and trees carefully picked to change colour with each season, and a changing collection of free-standing sculptures. The garden includes 99 palm trees, 78 small palm trees, 62 bitter orange trees, 42 varieties of shrubs, 450 climbing plants, 5,500 ground cover plants and over 100 aromatic plants.

L’Oceanogràfic (2003) is an open-air oceanographic park and the largest oceanographic aquarium in Europe with 110,000 sq m and 42 million litres of water. It was built in the shape of a water lily and is the work of architect Félix Candela, whose concepts here are reminiscent of Antoni Gaudí’s work in Barcelona. 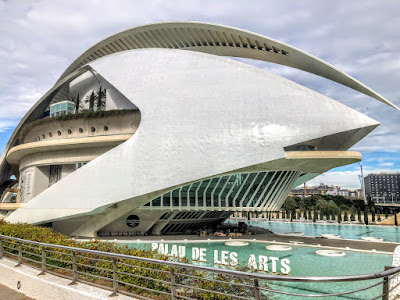 El Palau de les Arts Reina Sofia (2005) broods over the riverbed like a giant beetle, its shell shimmering with translucent, mosaic tiles. This is an opera house and a performing arts centre, surrounded by 87,000 sq m of landscape and water, as well as 10,000 sq m of walking area.

The Palau de Les Arts has four sections: the main hall, the master hall, the auditorium, and the Martin y Soler theatre. The building has a metallic feather outer roof that rests on two supports and is 230 m long and 70 m high. 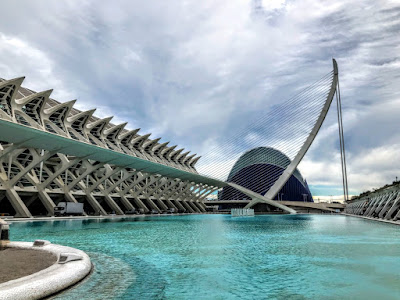 El Pont de l’Assut de l’Or (2008) is a white cable-stayed bridge crossing the dry Turia riverbed, connecting the south side with Minorca Street, in between El Museu de les Ciències and L’Agora. The tower of the bridge, at 125 m high, is the highest point in Valencia.

L’Àgora was inaugurated in 2011 but has still not been completed. One guidebook describes is as ‘poking out of the ground like a giant purple mussel.’ This covered plaza hosts concerts, sporting events, exhibitions, conventions and congresses. 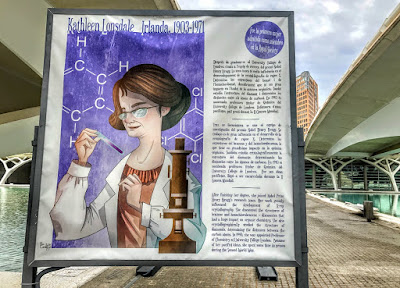 The ‘City of Sciences’ has beset by controversy from the beginning. The conservative Popular Party dismissed it as a ‘work of the pharaohs’ that would serve only to swell the ego of the Socialists, the driving forces behind the initiative. But later Popular Party governments expanded the complex beyond the original project and the enormous cost threatened to bankrupt Valencia.

The Palau de les Arts alone went €45 million over budget and has had many structural problems. But a report last year said the economic impact of the complex is €113 million a year and generates 3,509 jobs. 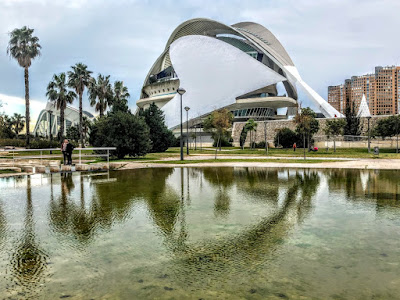