Reading TS Eliot in May, when
the hedges are white again
‘with voluptuary sweetness’ 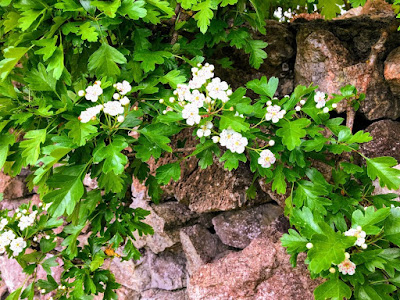 If you came this way in may time, you would find the hedges / White again, in May, with voluptuary sweetness (Photograph: Patrick Comerford, 2020)

Today is Ascension Day, and for the next ten days in the Church Calendar we find ourselves in what I might describe as an ‘in-between time’ – these ten days that bring us from the Ascension to Pentecost.

I was writing three weeks ago [30 April 2020] how even people who are not familiar with the poetry of TS Eliot can quote his opening lines of ‘The Waste Land’:

‘The Waste Land’ is a masterpiece of modern literature and one of the greatest poems in the English language. Those opening lines are often quoted, even by people who have never read all five sections and 434 lines of the poem.

The opening stanzas of ‘The Waste Land’ refer to the blooming of flowers and the coming of spring, but in gloomy tones. Winter is recalled nostalgically, with snow keeping us warm. But still I asked last month April is indeed the cruellest month.

April and May are proving to be the cruellest months we know in this part of Europe, in the way Covid-19 continues to take a grip on our lives, creating in an ‘in-between time’ that forces us to keep artificial and unnatural distances from one another, leaving many of us isolated, and stealing the lives of so many people of all ages and backgrounds.

But if ‘The Waste Land’ is Eliot’s April poem, then ‘Little Gidding’ is his May poem, his Ascension Day poem, or, indeed, his Pentecost poem.

‘Little Gidding,’ the fourth and final poem in the Four Quartets, is TS Eliot’s own Pentecost poem, written after his visit to Little Gidding on this day, Thursday 21 May 1936, ten days before Pentecost that year (31 May 1936). 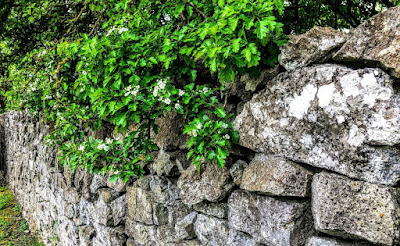 ‘Now the hedgerow / Is blanched for an hour with transitory blossom’ (Photograph: Patrick Comerford, 2020)

‘Little Gidding’ begins in ‘the dark time of the year,’ when a brief and glowing afternoon sun ‘flames the ice, on pond and ditches’ as it ‘stirs the dumb spirit’ not with wind but with ‘pentecostal fire.’

The poem opens with a description of the countryside in this time of year:

This is the spring time
But not in time’s covenant. Now the hedgerow
Is blanched for an hour with transitory blossom
Of snow, a bloom more sudden
Than that of summer, neither budding nor fading,
Not in the scheme of generation.
Where is the summer, the unimaginable Zero summer?

Eliot was aware that King Charles I had fled to Little Gidding during a crisis at the same time of the year, in May 1646:

It would be the same at the end of the journey,
If you came at night like a broken king

Although the community fell apart after the death of its founder, Nicholas Ferrar, it has continued to attract pilgrims to this day, and Eliot addresses them in this poem when he writes:

… You are not here to verify,
Instruct yourself, or inform curiosity
Or carry report. You are here to kneel
Where prayer has been valid. And prayer is more
Than an order of words, the conscious occupation
Of the praying mind, or the sound of the voice praying.
And what the dead had no speech for, when living,
They can tell you, being dead: the communication
Of the dead is tongued with fire beyond the language of the living.
Here, the intersection of the timeless moment
Is England and nowhere. Never and always. 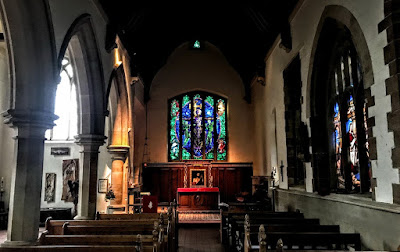 ‘You are here to kneel / Where prayer has been valid’ … the chapel in Saint John’s Hospital, Lichfield (Photograph: Patrick Comerford)

‘Little Gidding,’ which was published in September 1942, is Eliot’s last significant poem and one the greatest Christian poems of the last century. It is read by some as an extended sermon not only on all that is wrong in society, but what can be done about it.

Although Eliot visited Little Gidding long before the outbreak of World War II, the poem was read at its publication in the context of the destruction of English houses and churches – those ‘marred foundations’ of ‘sanctuary and choir’ – during the air raids and bombings. By 1942, many parts of England had seen houses, shops and whole streets destroyed by bombs.

Perhaps, today, ‘Little Gidding’ asks us once again whether we are being purged by the suffering of our age?

At the end of the poem, Eliot describes how the eternal is contained within the present and how history exists in a pattern. Drawing on the writings of the 14th century English mystic Julian of Norwich, he is assured: 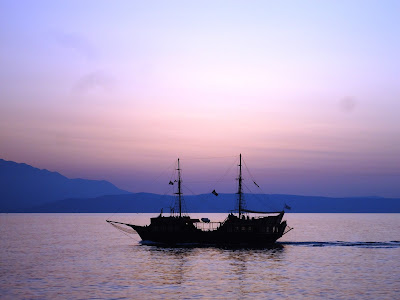 ‘ … all shall be well and / All manner of thing shall be well’ (TS Eliot, ‘Little Gidding’) … sunset seen from the Sunset Taverna in Rethymnon (Photograph: Patrick Comerford)