Different traditions and
different understandings
of a feast on 15 August

The calendar of the Church of England in Common Worship marks today [15 August] as a Holy Day with the simple designation ‘Blessed Virgin Mary.’ The Orthodox Church celebrates the day as the Dormition of the Theotokos, and for the Roman Catholic it is the Feast of the Assumption.

Traditionally, saints are named in the church calendar on the days they are said to have died. Christ, the Virgin Mary and Saint John the Baptist are the only figures named in the calendar of the Church of Ireland on the days marking their birthday: Christmas Day or 25 December, 8 September and 25 June. We remember the death of Christ on Good Friday, but neither the death of Saint John the Baptist (29 August) nor the death of the Virgin Mary (15 August) appear in the Calendar of the Church of Ireland this month.

In the case of Saint John the Baptist, this may be because he is recalled each year in the Epiphany readings as well as on 25 June.

Perhaps this discomfort marking the death of the Virgin Mary on 15 August has less to do with post-Reformation debates about her and more to do with residual memories of how 15 August was used by the Ancient Order of Hibernians to counter-balance Orange celebrations a month earlier on 12 July.

The Orthodox Church marks this day as the Dormition, while the Roman Catholic Church refers to it as the Assumption. They are different names for the same event – the death of the Virgin Mary or her departure from earth – but the two feasts do not necessarily have an identical understanding of the event or sequence of events.

The Assumption is a recent doctrinal innovation in the Roman Catholic tradition, decreed in 1950. The tradition of the Dormition is much older in the Orthodox Church, where the day is a Great Feast and recalls the ‘falling asleep’ or death of the Virgin Mary.

The death or Dormition of Mary is not recorded in the New Testament. Hippolytus of Thebes, writing in the seventh or eighth century, claims in his partially preserved chronology to the New Testament that the Virgin Mary lived for 11 years after the death of Jesus and died in AD 41.

The term Dormition expresses the belief that the Virgin died without suffering, in a state of spiritual peace. This belief does not rest on any scriptural basis, but is affirmed by Orthodox tradition. It is testified to in some old Apocryphal writings, but neither the Orthodox Church nor other Christians regard these as possessing scriptural authority.

Alexandra completed her icon in time for the Feast of the Dormition in Rethymnon on 15 August that year. 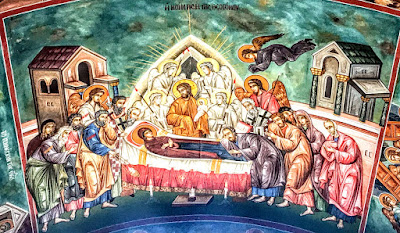 A fresco of the Dormition in a church in Crete (Photograph: Patrick Comerford)

In Greece, today is one of the biggest celebrations of the Orthodox Church, with people flocking to churches and monasteries to reverence icons of the Virgin Mary, with liturgical celebrations and processions, sometimes until late in the evening.

Some of the best-known celebrations in Greece are on the islands of Tinos, Patmos, Lesvos and Skiathos. It is not a day to mourn the death of the Virgin Mary, but a day of joy and dancing, celebrating the union of the mother with her beloved son.

The pilgrimage to the church on Tinos is probably the largest religious pilgrimage in Greece, and the festival there lasts until 23 August.

This is also the name day for Greeks with the names Maria (Mary), Marios, Panagiotis, Panagiota and Despina. 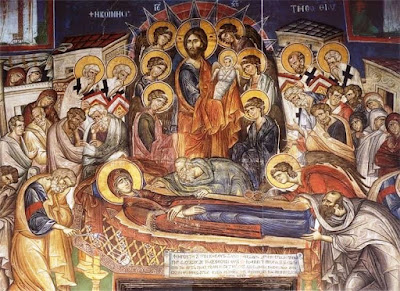