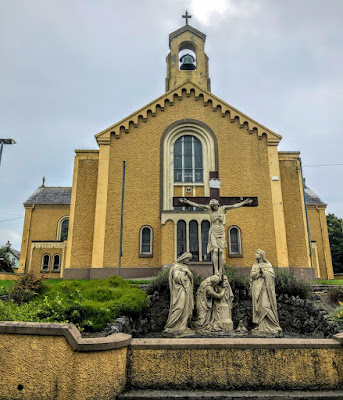 On the way back from Ballylongford and Saleen Pier to Askeaton on Sunday afternoon, two of us stopped in Shanagolden for a short time and, for the first time, I visited Saint Senan’s Church, the Roman Catholic parish church in Shanagolden.

There are three churches named after Saint Senan in the same group of parishes: Foynes, Roberstown and Shanagolden. Saint Senan’s Church in Shanagolden, which is over 200 years old, is a pre-Emancipation, early 19th-century church in the Hiberno-Romanesque style and stands on prominent site just east of Shanagolden.

Father John Syne was registered in 1704 as priest for an area that included Kilmoylan, Shanagolden and Robertstown, and lived in the townland of Clashganiff. One of his successors, Father Philip Nolan or Pilib Ó Nualláin, died in 1738 at the age of 37, and was buried on nearby Knockpatrick.

Later in the 18th century, three Franciscan friars ministered in the parish, and they probably lived in Askeaton, where a Franciscan community had survived close to the ruins of the former Franciscan friary or abbey.

The present Catholic church in Shanagolden was built in 1814 by Father Patrick McDonnell, who was parish priest of Shanagolden from 1808 until his death in 1824. 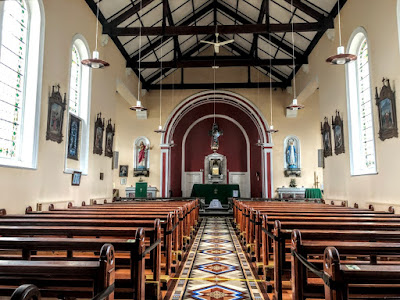 The site was donated by Stephen Edward Rice of Mount Trenchard, and the list of donors to building the church shows the ecumenical atmosphere in Co Limerick even in those pre-Emancipation days, they include John FitzGibbon (1792-1851), 2nd Earl of Clare, his brother, the Hon Richard Hobart Fitzgibbon (1793-1864), later 3rd Earl of Clare, Stephen and Thomas Rice, the Knight of Kerry and the Knight of Glin, Sir Vere Hunt, local Church of Ireland clergy, including the Revd Joseph Johnson, curate of Nantenan and Kilfinny, the Revd George Vincent, Vicar of Shanagolden, and members of the Blennherhassett, Langford and Royse families.

The church has an unusual orientation, from south-west to north-east, rather than the traditional, liturgical east-west, probably because of the difficulties created by the shape and size of the site.

The church is set back from the road with well-preserved boundary walls and steps. This is cruciform, gable-fronted church was renovated in 1824 and 1905, but still has its original form and much of its original fabric. There is good quality plasterwork, stained glass and fine render and marble galleries.

The church has a porch at the front, a three-bay nave, shallow full-height square-profile chapels, transepts with porches and a chancel and a recently-added lower sacristy.

The coherent decorative scheme culminates in the bellcote, which unifies the revival style of the building. 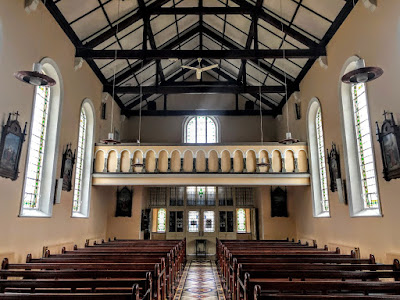 Inside the entrance, a timber screen has double-leaf half-glazed doors with stained-glass sidelights and overlights. The porch has a wooden statue of the Virgin Mary with the Christ Child, a photograph of the original church, and a list of the subscribers to the church published in the Limerick Gazette on 9 August 1814.

Inside, there is a carved, timber A-frame ceiling, rendered galleries in the transepts and at the entrance, and the chancel has a round-headed arcade with marble pilasters.

The carved marble altar dates from 1912, and altar rails were donated by Michael O’Connor of Mullough. There is a crucifix above the altar, to the left is a statue of the Sacred Heart, and to the right a statue of the Virgin Mary. These statues are set in decorative round-headed arch surrounds.

There is a shrine to Our Lady of Perpetual Succour in the south (right) transept and a shrine to the Crucifixion in the north (left) transept to the memory of Alice M O’Brien.

All the church windows have a plain design, and the floor has geometric tiles. 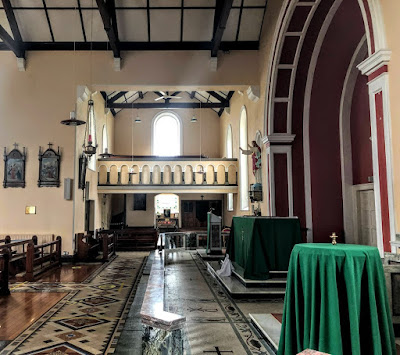 Outside, to the left or west of the church, a plaque in Latin on the boundary wall records that Father Patrick McDonnell built the church in 1814. Dean Patrick McNamara, who succeeded Father McDonnell as parish priest from 1824 to 1834, who is also named on the plaque, renovated the church in 1824 and bought the church bell that year. He also gave his name to Dean Street in Shanagolden.

A Lourdes grotto in the grounds of the church is to the memory of Lizzie Reidy, who died in 1909. A large crucifixion scene at the front of the church faces the roadside.

The plaque on the churchyard wall commemorates the building of the church in 1814-1824 (Photograph: Patrick Comerford, 2020)

The priest that built the present church was Michael McDonnell, not Patrick. He was priest in Glin before this posting. He is my gg grand uncle.