Kilmoylan Church and
a sad sinecure in a
west Limerick parish 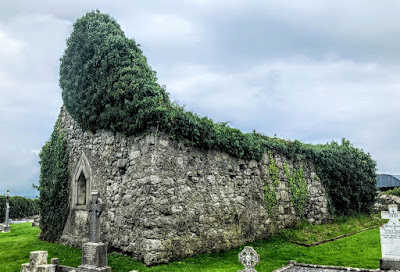 About a mile east of Shanagolden, the ruins of Kilmoylan Church stand at the east end of the parish.

The ruined church stands on a mound between two rivers and had commanding views of the surrounding countryside of west Co Limerick.

The parish was in the patronage of the Vicars Choral of Saint Mary’s Cathedral, Limerick, who appointed Vicars of Kilmoylan from at least the early 15th century.

However, in the post-Reformation period, one-third of the tithes went to Vicars Choral and two-thirds to a lay lessee of the Vicars Choral, and the Vicarage of Kilmoylan became a mere sinecure.

The nominal Vicars of Kilmoylan included Robert Elliott (1683-1687), who later became Archdeacon and Vicar-General of Ferns; Thomas Lloyd (1715), who became Precentor of Limerick; father and son Henry and David Barclay, who were both Vicars Choral of Limerick and succeeded each other; Deane Hoare, who became Vicar-General of Limerick and Precentor of Ardfert; his son, William Deane Hoare (1798-1823), who at the same time was Vicar Choral of Limerick and chaplain of Saint George’s Chapel, Limerick; and the brothers William Newcombe Willis and Thomas Willis, who also succeeded each other.

The last Vicar of Kilmoylan was Canon Thomas Payne Weldon in in 1853-1888 and lived in Glin. 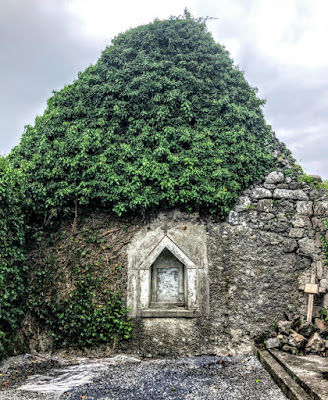 Inside the ruins of Kilmoylan Church (Photograph: Patrick Comerford, 2020)

Throughout most of that time, the church was in ruins, and Samuel Lewis recorded in his Topographical Dictionary in 1837 that Kilmoylan was a parish without a church, glebe house or glebe. But the tithes continued to produce an annual income of £232 7s 11d.

The vicars who enjoyed this egregious example of a sinecure in the Church of Ireland used it to supplement their incomes while they held other parishes, and none of these pluralists ever lived in the parish. Some lived in neighbouring parishes, or in Limerick, but at least one lived in Dublin, where he enjoyed his portion of the tithes without having any church, church services or parishes.

The parish was united with Kilfergus (Glin) in 1861 but was finally abolished in 1888, and now lies within the Rathkeale Group of Parishes. The rubble from the west wall that fell in 1839 are gathered in a pile, but the churchyard continues to be used as burial ground by local families and is well tended by a small group of local people. 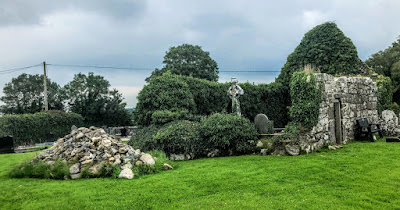 The west wall of Kilmoylan Church fell in 1839, and the rubble remains gathered in a pile (Photograph: Patrick Comerford, 2020)