What the Victorian Butlers
saw when they rebuilt
and developed Cahir

The Square in Cahir is bookended by the Cahir House Hotel and the former Market House, now the Library (Photograph: Patrick Comerford, 2020)

The building and rebuilding programmes in Cahir, Co Tippeary, sponsored and financed by the Butler family of Cahir Castle, have left the town with an elegant square and streets and an architectural heritage that are symbolised in the way the square is book-ended by the Cahir House Hotel at the south end and the former Market House at the north end.

Cahir House replaced Cahir Castle in the 1770s as the principal residence of the Butlers of Cahir, who held the tiles of Baron of Cahir and Earl of Glengall.

When Pierce Butler, 8th Lord Cahir, died in Paris in 1788 without an immediate male heir, the vast Cahir estates developed first on his distant cousin, James Butler, who died within a month, and then on the impoverished 12-year-old Richard Butler (1775-1819) of Glengall, who had been whisked off to France by relatives.

The wily Arabella Jeffreyes of Blarney Castle rescued him and kept the young Lord Cahir under her care until he was 17, when he married her daughter Emily, then 16, in 1793. After a sumptuous wedding, the young couple moved into Cahir House and entertained the nobility and gentry of Co Tipperary on a regular basis.

On one occasion, it was recorded in 1793, ‘Lord Cahir gave a most flaming fete champêtre in Cahir House where the company dined under marquees on the lawn and danced all the evening. Lady Cahir danced an Irish jig in her stockings to the music of an old piper. We had a superb supper in the three largest rooms, all crowded as full as they could hold and we did not get home till eight o’clock next morning and so slept all the next day.’

Cahir House was home to Lord Cahir’s family for 60 years. In 1796, Lord Cahir took his seat in the Irish House of Lords, and in 1816 he was given the additional titles of Earl of Glengall and Viscount Cahir. His commissioned the Regency architect John Nash to design many fine buildings in Cahir, including Saint Paul’s Church, the Erasmus Smith School and the Swiss Cottage.

His son, Richard Butler (1794-1858), 2nd Earl of Glengall, was responsible for much of the development and rebuilding of Cahir in the first half of the 19th century. But he was declared bankrupt in 1853 and the Cahir estates were sold. However, 20 years later, his daughter, Lady Margaret Butler-Charteris, succeeded in buying back Cahir House and the entire Cahir estate. 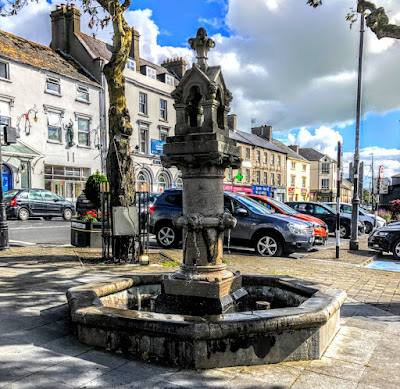 Lady Margaret Butler-Charteris erected the fountain in the square in 1876 (Photograph: Patrick Comerford, 2020)

Lady Margaret erected the fountain in the centre of the square in 1876. It consists of a heavy shaft, with a ring around it halfway up; this ring has four lions’ heads, and on the top of the shaft is a Ruskin-inspired Venetian-Gothic ‘tabernacle,’ with four square-plan piers, each with a lion’s head on the outer corner. The limestone shaft is set in a small basin.

The fountain was intended to radically improve the supply of water to the town centre, and the estate was responsible too for building the town reservoir and mains pipe. It supplied a high-pressure water supply for Cahir, piped several miles at enormous cost from the Galtee Mountains. But the fountain is also a memorial to her husband, Colonel Richard Charteris, second son of the 9th Earl of Wemyss and March.

Cahir House was later the home of Lady Margaret’s land agent. The family retained ownership until her son Richard Butler Charteris died in 1961.

Meanwhile, Nora Burke leased the premises and opened Cahir House Hotel in 1927. For over 40 years, her hotel had a reputation as a family-run, warm, welcoming and hospitable establishment. Her visitors’ books included such names as Eamon de Valera, WT Cosgrave, Mae West, Douglas Fairbanks, Walt Disney and Jackie Kennedy.

The hotel continued to prosper under the strict management of Eileen McCool, until her death in 1974, and her legacy of genuine warmth and accommodation lives on in the hotel to this day.

It is still possible to see how this hotel was once an impressive five-bay, three-storey over basement townhouse, built in the late 18th century. Although it has undergone many alterations and a change of use, it retains much character and interesting fabric, such as the stone to the window and door dressings. 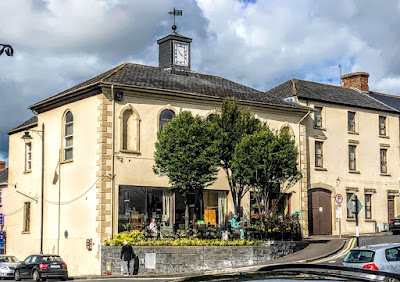 The Library on the north side of the Square was built in the 18th century as the Market House (Photograph: Patrick Comerford, 2020)

Facing Cahir House Hotel, on the north side of the Square, the Library or former Market House is another significant building. It was built in the 18th century as the Market House.

Sadly, it underwent an unsympathetic ‘renovation’ in the 1980s, when original arched openings were replaced with over-sized plate-glass windows, destroying the integrity of the design. 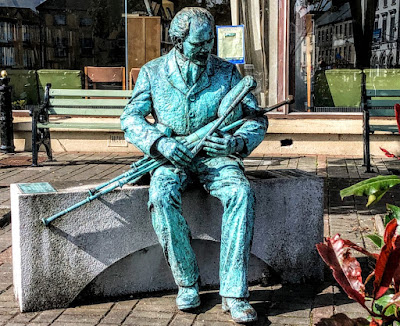 In front of the library, facing the Square a life-like statue commemorates the blind piper, Edmund Keating Hyland (1780-1845), one of Cahir’s most famous musical sons. The sculpture is the work of Mona Croome Carroll (1999).

Despite being blinded by smallpox at the age of 15, Hyland became a gifted piper and composer, and was known as the ‘Prince of Pipers.’

He played his best-known composition, the ‘Fox Chase,’ for King George IV in Dublin in 1821. 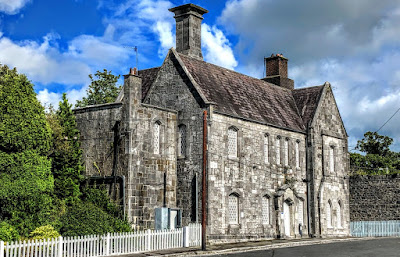 Cahir Railway Station on Church Street, near Saint Paul’s Church, was designed in the Gothic Revival style by William George Murray (1822-1871) in 1851, while he was working for William Dargan, and opened on 1 May 1852.

The station has a two-storey façade, with a single-storey to the elevated platform at the rear. The main elevation has an interesting play of surface texture between the cut stone and the quarry glazed windows, while the profile of the rear is dominated by the complex roof forms and tall, stout chimneystacks.

The station is on the Limerick Junction to Waterford line, but today only four trains – two going each way – stop each weekday in Cahir. 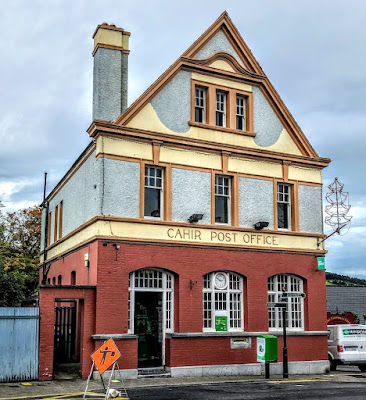 Cahir Post Office was designed in the Arts and Crafts style by George William Crowe in 1902 (Photograph: Patrick Comerford, 2020)

Later, attractive buildings in Cahir include the Post Office on Church Street, designed in the Arts and Crafts style for the Office of Public Works by George William Crowe in 1902. He also designed post offices in Bray, Co Wicklow (1904), Boyle, Co Roscommon (1907-1908) and Clones, Co Monaghan (1917).

The diversity of surface texture seen in the use of brick, cut limestone and moulded render makes this a delightful building.

This two-storey with attic building has a three-bay entrance gable-front, multiple-bay side elevations and a single-storey sorting office at the side. The windows are typical of the era and enhance the building.

Other features worth noting include the pitched slate roof, the rendered and red brick chimneystacks, the painted brick in English Bond on the ground floor, the moulded frieze with the incised lettering ‘Cahir Post Office,’ the moulded pediment on the gable-front, the keystones, the timber sliding sash windows, the glazed timber front door with is overlight and sidelights, and the clock. 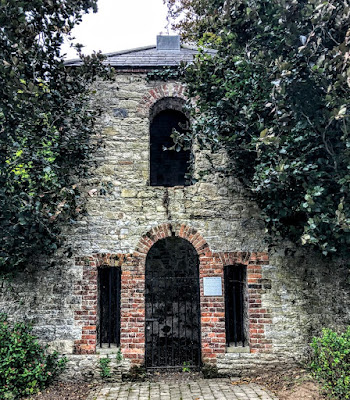 Behind the AIB bank on Castle Street, an early Victorian dovecote was designed and built by William Tinsley as part of the residence of John Chaytor, the Quaker land agent of Lord Glengall.

The dovecote is located on an axis that visually lines up the pathway in the Dowager’s Wood, the Dovecote, the terraced gardens and the centre of the two bays of Chaytor’s house. It appears to have added to the limestone boundary wall in in sandstone as a further contrast and also served as an exclusive gatehouse for Chaytor into Lord Glengall’s private demesne and pleasure grounds.

Chaytor kept pigeons in the upper storey for either food, a source of guano, communication, or simply as a hobby.

The former Quaker meetinghouse on Abbey Street was designed by an unknown architect and built of sandstone in 1834. At the time, about 80 Quakers lived in Cahir, and many Quaker families were involved in running the large mills on the banks of the River Suir, including the Manor Mills on the Bridge of Cahir, the Suir Mills or Cahir Bakery, and the Cahir Abbey Mills.

However, the Quaker community in Cahir eventually went into decline at the end of the 19th century. The meeting house was first leased in 1884 and then sold to the Presbyterian Church in 1897. It continues to be used for services under the name of Cahir Christian Centre, and remains an example of Cahir’s diverse heritage.

The former Quaker meetinghouse on Abbey Street was built in 1834 (Photograph: Patrick Comerford, 2020)