Saint Mary’s, Cahir, is
an imposing church
on an elevated site 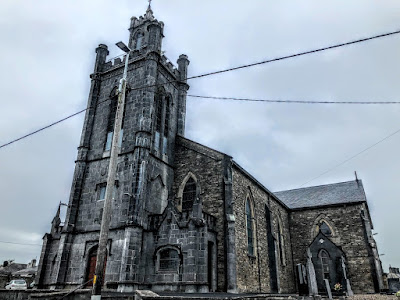 Returning from the Swiss Cottage to the town centre of Cahir last weekend, I visited Saint Mary’s Roman Catholic parish church before going on to visit Saint Paul’s Church of Ireland parish church.

Saint Mary’s Church was built in 1833-1839 and stands on an elevated site on Saint Mary’s Road in Townparks that gives the church an imposing presence in Cahir. The earliest church on this site was built in 1790-1792. Before this, the parishioners worshiped in a thatched chapel that stood a little further along the Ardfinnan road, near the entrance to Cahir Park.

This Penal-era chapel was built in the early 18th century on a site provided by the Butler family of Cahir Castle.

No illustrations of the late 18th century church survive. But in 1824 it was described as ‘a substantial building, of limestone, and what is uncommon, possesses a fine tower and steeple.’ 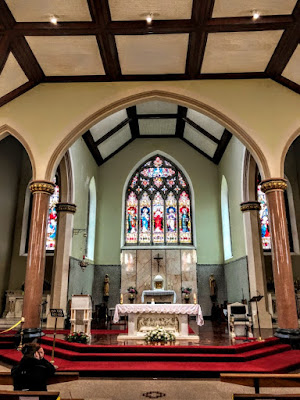 The foundation stone for the church was laid on 7 May 1833. The architect was John Benjamin Keane of Dublin, while church was built by local Mullaney firm.

Keane was one of the foremost architects of the day. He designed Saint Mel’s Cathedral, Longford, and Saint John’s Roman Catholic Church, Waterford, and he worked with Sir Richard Morrison on the Pro-Cathedral in Dublin and with AWN Pugin and Patrick Byrne on the designs for the Loreto Convent chapel and lantern in Rathfarnham. He was also responsible for Nenagh Courthouse and the Tipperary County Gaol in Nenagh (1840-1842).

Keane first worked as an assistant with Richard Morrison in 1819 or 1820. He was in independent practice by 1823, when his name appears in Wilson’s Dublin Directory. 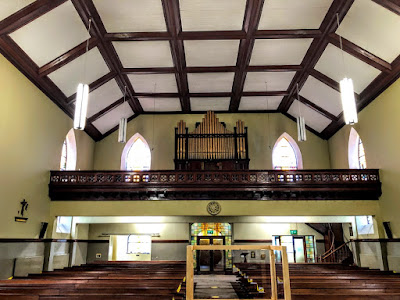 Keane received several important commissions including a number of major Roman Catholic churches in Dublin and elsewhere. Keane designed the Gothic Revival quadrangle at Queen’s College, Galway (now NUI Galway) in 1845 very much in the fashion of Christ Church College, Oxford. Later, he was the engineer with the River Suir Navigation Co in 1846-1848.

However, Keane’s career was blighted by alcoholism in his later years. He fell into debt and was imprisoned in the Marshalsea gaol. He died on 7 October 1859.

Saint Mary’s Church in Cahir was largely complete by 1839, but work continued on the fine lantern tower, and entrance porches until 1842. 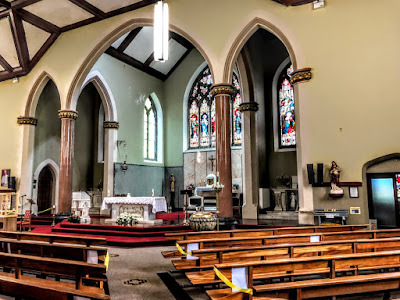 Saint Mary’s Church was renovated in 1888, with the addition of the chancel (Photograph: Patrick Comerford, 2020)

The church underwent renovations in 1888, with the addition of the present chancel with five Bath-stone arches, supported by two massive columns of polished Aberdeen granite. During this period, the parochial hall was located at the Castle Court Hotel, with the curates living in an adjoining house.

Saint Mary’s is a large and richly detailed church. It has been built in several stages, reflected in the difference between the earlier sandstone walling and the later limestone tower and porches. The wide variety of window and door openings adds considerably to the architectural details of the church.

Saint Mary’s is a cruciform-plan church, with a two-bay nave, a single-bay chancel and transepts, a three-stage west tower with flanking porches, side chapels flanking the chancel, a south-east chapel, a north-east sacristy and extensions.

The octagonal pilaster buttresses at the corners of tower are topped with similar finials with trefoil-headed panels and moulded copings. There are string courses between the stages of tower and at the flanking porches. 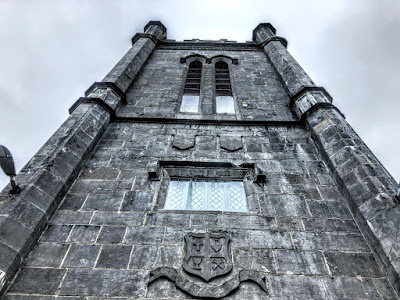 A Tudor-arch entrance opening is at the front of the tower, with label-moulding, carved detail to spandrel, a date plaque overhead, and timber panelled a double-leaf entrance door with a stained glass overlight.

The tower also has crenellated parapets, with a cut limestone square-plan lantern over the tower with chamfered corner pilasters, a crenellated parapet, an octagonal-plan copper spire and pointed arch windows with hood mouldings and carved stops.

There are dressed limestone stepped buttresses at the corners of the church and between the windows of the nave. There are blind occuli in the transepts and pointed arch windows in the nave and transepts. 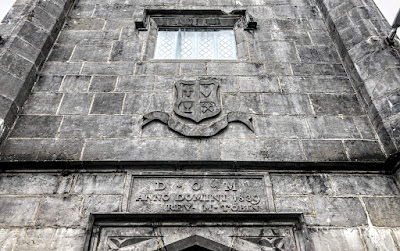 One of the side chapels has a hexafoil window with chamfered dressed limestone surrounds and tracery.

The church has a carved timber gallery at the west end, with a pipe organ installed in 1850. The organ was made the Wills firm, which also built the organ at Westminster Abbey.

Cahir is the northern-most parish in the Diocese of Waterford and Lismore.

Following the liturgical reforms introduced after Vatican II, Saint Mary’s Church was renovated in 1968-1970, and many of the original interior features were removed. However, the exterior survives virtually intact. 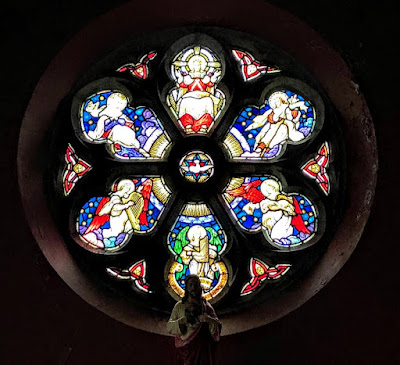 The hexafoil window in one of the side chapels (Photograph: Patrick Comerford, 2020)