The Dominican Priory
in Kilmallock and
its river-side ruins 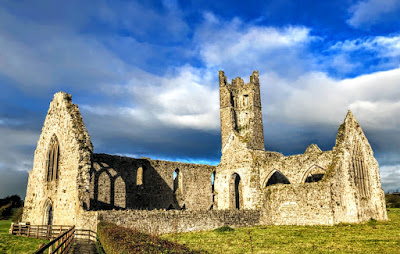 The Dominican Priory, also known as Saint Saviour’s Priory, stands on the north bank of the River Loobagh, just outside the mediaeval town walls of Kilmallock.

In the Middle Ages, Kilmallock was a thriving, Anglo-Norman walled borough. The priory was founded with royal consent in 1291. Although there is no clear record of who the original founder was, the friary stands on land bought by the friars from John Bluet, a burgess of the town. 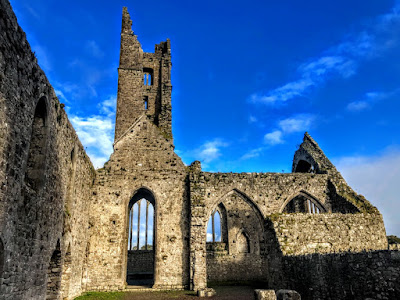 The FitzGeralds, a powerful Anglo-Norman family, were important benefactors of the friary, and a key figure in the foundation of Saint Saviour’s was probably Gilbert FitzJohn FitzGerald, ancestor of the ‘White Knights.’ His descendants in the Fitzgerald and Fitzgibbon families remained the key benefactors of the priory in the centuries that followed, with Maurice Fitzgerald was the main patron.

Gilbert FitzGerald then invited the Dominicans to the monastery. The Dominican Order of friars or Order of Preachers was formed in 1216, and was present in Ireland since 1224, when the first foundation was established in Dublin.

The Bishop of Limerick, Gerald le Marshall (d. 1302), disapproved of the friars buying land within his borough without permission and had the friars expelled immediately. An inquiry was held in Cashel on 31 December 1291 by William de Vesci, the king’s chief administrator in Ireland. The inquiry ruled that the bishop should not have evicted the Dominicans as they owed no rent or service to the bishop for their site. This allowed the Dominicans to return to the priory in Kilmallock soon after. 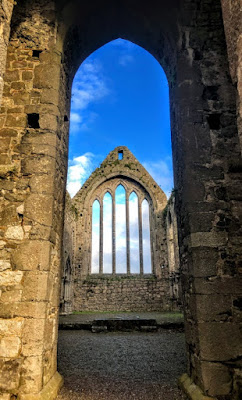 The five-light window in the choir seen through the tower (Photograph: Patrick Comerford, 2020)

The friary was enlarged in 1320. Its community both grew and dwindled over the centuries, mainly due to changing fortunes in politics and war.

Maurice FitzThomas FitzGerald, 1st Earl of Desmond, who died in 1356, was a patron of the friars and was probably involved in enlarging the church ca 1320. The tomb-niche in the north wall of the choir, a traditional place for the burial of an important benefactor, is stylistically of a similar date.

The General Chapter of the Dominican Order in Ireland met in Kilmallock in 1340. 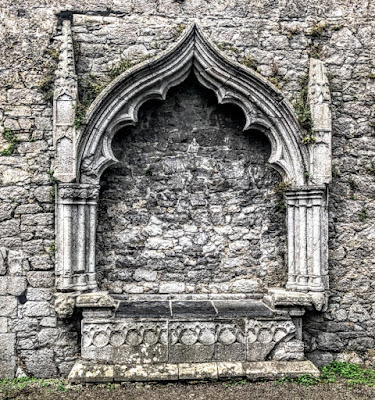 The tomb-niche in the north wall of the choir may belong to the FitzGerald family of Desmond (Photograph: Patrick Comerford, 2020)

The nave and chancel both retain details from the late 13th century. The early 14th century saw the addition of the south transept, a bell tower half-way along the length of the church, and an aisle on both the south side of the nave and the west side of the transept. The quality of architectural detail is very fine, and the five-light east window of the church is one of the finest in Ireland.

The five-light window in the south transept is one of the most exquisite in Ireland. The church contains some fine decorative stone carvings that date from the 13th and 14th centuries.

The extensive remains also include the domestic ranges and the cloister, and the restored vaulted ambulatory and arcade. Above the cloisters, the upper storey of the north range survives, a rare occurrence in remains of mediaeval friaries. Although access to the upper storey is closed, we climbed the mural stairway that leads to it. 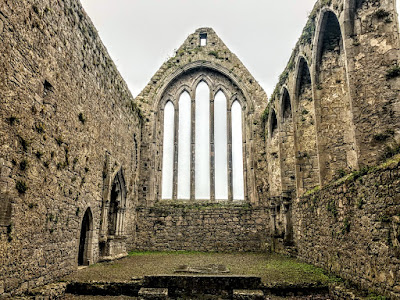 The choir, chancel and east window in the priory church (Photograph: Patrick Comerford, 2020)

At the dissolution of monastic houses in 1541, the friars possessed the two-acre site on which the friary and its buildings stood, as well as 12 acres, a watermill and six cottages.

By 1548, James FitzJohn FitzGerald, Earl of Desmond, owed more than £21 in arrears on his lease of the friary. The friary passed to the sovereign and commonalty of the town of Kilmallock in 1569-1570.

The town was sacked and burnt in 1571during the Desmond rebellion, and the friars were probably driven out of the friary. The friary was granted to Nicholas Miagh, the sovereign or mayor of Kilmallock, in 1594.

A list of the founders of Dominican friaries compiled in 1643 recorded that the Dominican priory in Kilmallock was ‘founded and endowed by the citizens.’ 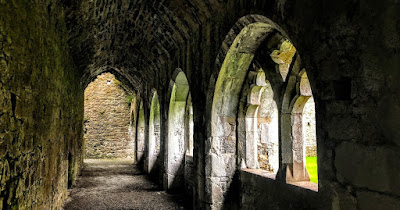 The Roman Catholic parish church is dedicated to Saint Peter and Paul, the dedication of the Collegiate Church in Kilmallock. But in his design of the church, the architect JJ McCarthy, reflected the design of the priory church. The parish church is one of the fine examples of Gothic Revival architecture in Ireland. It has been described an ‘a mini-cathedral’ and opened in 1888.

A year later, a fundraising campaign was launched in 1889 to preserve the Dominican Friary in Kilmallock. It raised over £40 within a year, with a large portion of this money coming from members of the Fitzgibbon family, descended from Maurice FitzThomas Fitzgerald, 1st Earl of Desmond. 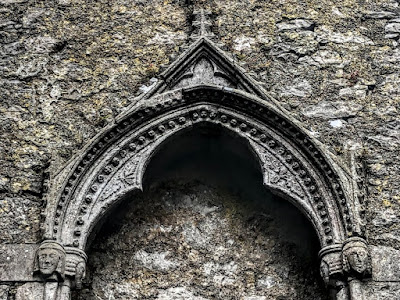 The church contains some fine decorative stone carvings that date from the 13th and 14th centuries (Photographs: Patrick Comerford, 2020)