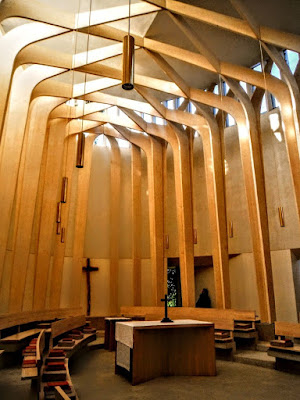 The new chapel at Ripon College Cuddesdon may be the most interesting chapel in any theological college in the Church of England today (Photograph: Patrick Comerford)

Ripon College Cuddesdon said farewell last week to Sister Anne CSJB, who is moving to be with Sister Jane Olive at Saint Mary’s Convent and Home in Chiswick. Sister Mary Britt is joining them there next week.

Canon Mark Chapman, Vice-Principal of Cudddesdon, said last week that ‘they have been wonderful companions over the past eight years when they took the very courageous decision to come and live alongside us in Cuddesdon.’

Together with Sister Elizabeth Jane and Sister Ann Verena, they have been a real blessing to the staff and students at Cuddesdon, to the families and to the parish as well.

‘Their wisdom and vitality have inspired us and their companionship and prayers have sustained us,’ Canon Chapman said. He recalled the immense legacy they leave to the college, not least of which is the glorious chapel which bears the symbol of Saint John Baptist at its threshold. ‘He must increase, but I must decrease.’

Mark Chapman was my host when I was visiting Ripon College Cuddesdon, about five or six miles south of Oxford, at this time seven years ago (October/November 2013). At the time, I was visiting a number of theological colleges in England, meeting colleagues who were teaching in the same areas as I was at the Church of Ireland Theological Institute and Trinity College Dublin, and who share the same fields of academic interests.

At Ripon College Cuddesdon, my room looked out at rolling Oxfordshire countryside, and to my left from the window was perhaps the most interesting chapel in any theological college in the Church of England today. What was then a new chapel had attracted considerable media attention at the time, ranging from the BBC to the Financial Times and to professional architectural journals.

There has been a theological college at Cuddesdon for almost 170 years. Cuddesdon College was established in 1854 by Bishop Samuel Wilberforce, under whose portrait I sat at lunchtime. His vision was for a college independent of any specific Church faction, and with a focus on the discipline of daily prayer and spiritual formation.

The college buildings, most of them designed by GE Street, were built opposite his episcopal palace, Cuddesdon Palace. Staff members in the past have included Bishop Charles Gore, editor of Lux Mundi and founder of the Community of the Resurrection, and Robert Runcie, later Archbishop of Canterbury. Both have buildings at Cuddesdon named after them.

With the incorporation of the Oxford Ministry Course (2006) and the West of England Ministerial Training Course (2011), the college was able to offer a wide range of additional non-residential courses. A partnership with the Church Mission Society (CMS) means the college also offers training for Ordained Pioneer Ministers.

The five remaining sisters from two Anglican religious orders – Saint John the Baptist and the Good Shepherd – joined the college community at Cuddesdon in 2012. They have provided a praying presence throughout the year and offered spiritual direction, quiet days and guided retreats.

The Community of Saint John Baptist (CSJB), also known as the Sisters of Mercy or the Clewer Sisters, was founded by the Irish-born Mother Harriet Monsell (1811-1883), from Dromoland Castle, Co Clare, a sister of the Irish patriot William Smith O’Brien of Cahermoyle House, Co Limerick. 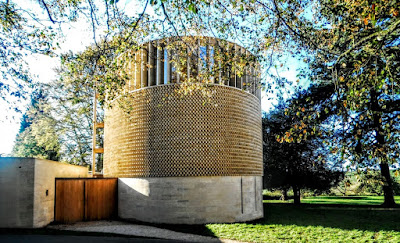 The chapel was voted into second place in the prestigious architectural prize, the Stirling Prize (Photograph: Patrick Comerford)

With their move to Cuddesdon, they built a new Harriet Monsell House in the college grounds and endowed the new college chapel. I could see Harriet Monsell House to the right of my room in Liddon, the chapel is to the left. Just weeks before my visit, the chapel was voted into second place in one of Britain’s most prestigious architectural prizes, the Stirling Prize, awarded by the Royal Institute of British Architects (RIBA).

Canon Mark Chapman was my host at Ripon College Cuddesdon in 2013. I had previously visited in 2007, when I was shown around the older chapels by the Very Revd Lister Tonge, later Dean of Monmouth and Newport Cathedral. The old chapel is now part of the library.

The new, elliptical Bishop Edward King Chapel at Cuddesdon became the place of worship for the nuns and for the staff and ordinands. The chapel name honours the saintly Edward King, Bishop of Lincoln and a former chaplain and principal of Cuddesdon Theological College.

Ripon College Cuddesdon stands in beautiful countryside south of Oxford, and the chapel, which stands at the centre of the college, is dramatic and subtle, modern and yet crafted from natural materials. It can seat 120 people, cost £2.6 million, and took 18 months to build. It was designed by in 2009 by Niall McLaughlin Architects and was opened in February 2013. 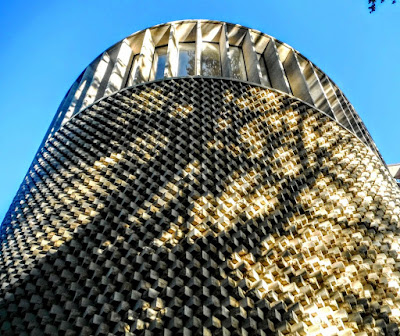 The outside wall is made of Clipsham stone arranged in a dogtooth style (Photograph: Patrick Comerford)

‘Much like when people come out of the cinema and it feels like they’ve been immersed in one world and are coming out into another, that's what I wanted from the chapel,’ says Niall McLaughlin. ‘I wanted people to come out underneath the protective canopy of the beech.’ 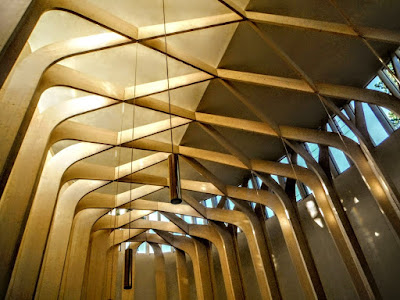 Part of the inspiration for the new chapel was a play on the word nave (Photograph: Patrick Comerford)

‘It is the bit that doesn’t move, everything else swirls around it. This is a place of stillness and watchfulness. This is a place where people come to gaze,’ the then Principal of Cuddesdon, Canon Martin Percy, recently told the BBC. Dr Percy, who is now Dean of Christ Church, Oxford, described the acoustics inside the chapel as ‘seeping through your skin and into your soul.’

‘This chapel with its use of light, space, glass, wood and stone captures our hope for the church and the world, and for the shaping of religious and spiritual life,’ Dr Percy said at the time.

‘There is so much metaphor in this chapel,’ Edwin Heathcote, architectural critic, wrote in the Financial Times. ‘It has all these layers of imbued meaning, perhaps there are too many. Maybe they tried too hard. But it works. It’s a very pure kind of architecture. It would have been a dream commission.’

Students are back at Cuddesdon, and on the off-site Pathways, for the Michaelmas (Autumn) Term in Covid secure environments that conform to the latest regulations and guidance.

Teaching is being delivered through a mix of small face-to-face classes and online, and gathered worship is continuing with the community divided between the Edward King Chapel and All Saints’ Cuddesdon to maintain social distancing. The well-being of students, staff and their families means, sadly, the college remains closed to visitors, including to the Edward King Chapel. 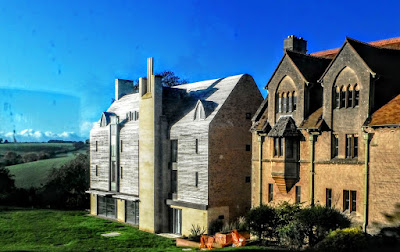 Harriet Monsell House seen to the right of the room where I stayed in Liddon (Photograph: Patrick Comerford)