Shanid Castle, a hill-top
ruin near Shanagolden, was
a Desmond stronghold 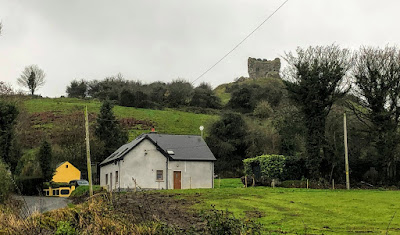 The ruins of Shanid Castle, an important Anglo-Norman stronghold, are a short distance south of the village of Shanagolden on the Ardagh road in Co Limerick, 13 km north of Newcastle West. Two of us have often driven around this hill-top ruin, but we have never figured out how to gain access to this fine example of an Anglo-Norman fortress.

The famous war-cry and motto of the Earls of Desmond and the Knights of Glin was Shanid Aboo, ‘Long Live Shanid.’ It echoes a belief that Shanid Castle was the first and oldest Desmond castle.

The castle was occupied at times by both main branches of the FitzGerald family of Munster: the Earls of Desmond and the Knights of Glin.

Maurice FitzGerald was granted lands in Limerick by Richard de Clare (Strongbow) after the arrival of the Anglo-Normans. His son, Thomas FitzMaurice, inherited the lands of Shanid and is said to have built Shanid Castle in 1230. However, there are strong indications that the castle may have stood there before that date.

Thomas FitzMaurice was the ancestor of the FitzGeralds, the Earls of Desmond and this was to be the first stronghold of the Knights of Glin. These Desmond Geraldines would go on to build many castles but Shanid was reputedly the strongest.

Shanid Castle includes the shattered shell of a polygonal tower spectacularly clinging to the summit of a large earthen motte with surrounding fosse and bank.

The castle sits high on a hill with a motte some 35 ft deep. This impressive stronghold once had circular walls 10 ft thick. It is surrounded by more motte and bailey defensives, ditches and banks. It is likely that this series of mottes and ditches were present before the stone tower was added.

The tower is circular internally and only half survives to full parapet height. It was surrounded by a curtain wall around the summit of the earthwork. The remains on the south side still retain some of their battlements and loopholes. A small, kidney-shaped bailey on the east side has no sign of an enclosing wall.

The castle was briefly the chief seat of the Desmond Fitzgeralds, Earls of Desmond, and it was the first stronghold of the Knights of Glin.

The last Earl of Desmond was murdered in Kerry in 1584. The lands of the Desmond Geraldines were then divided up and parcelled out. The castle was captured by Hugh O’Donnell in 1601, but continued to be inhabited until 1641, when it was burned and dismantled during the 1641 rebellion.

The tower was remarkably complete until the end of the 19th century, although only the shell remains now. The tower is multi-sided outside and round inside, it had just one upper storey over a vaulted cellar. 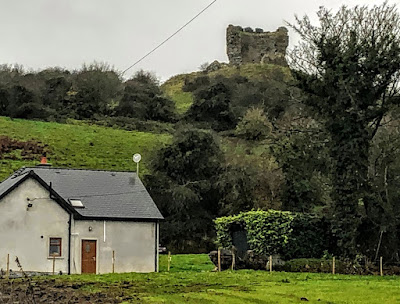 All that survives of Shanid Castle today is the hill-top ruin (Photograph: Patrick Comerford, 2020)

On Shannon side the day is closing fair,
The kern sits musing by his shieling low,
And marks, beyond the lonely hills of Clare,
Blue, rimmed with gold, the clouds of sunset glow.

Hush in that sun the wide-spread waters flow,
Returning warm the day’s departing smile;
Along the sunny highland pacing slow
The keyriaght lingers with his herd the while.

And bells are tolling faint from far Saint Sinon’s isle.
O loved shore! with softest memories twined,
Sweet fall the summer on thy margin fair!
And peace come whispering, like a morning wind,
Dear thoughts of love to every bosom there!

The horrid wreck and driving storm forbear
Thy smiling strand, nor oft the accents swell
Along thy hills of grief or heart-wrung care;
But heaven look down upon each lowly dell, And bless thee for the joys I yet remember well!