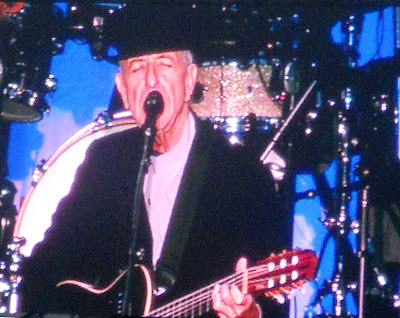 Leonard Cohen at the Royal Hospital, Kilmainham in 2012 … is ‘Democracy is coming to the USA’? (Photograph: Patrick Comerford)

I plan to stay up all night to watch the US election and the results coming in. Although it’s over 18 years since I left The Irish Times in 2002, I am still a ‘news junky’ and I still stay up late into the night and into the early morning watching election results pour in from the US, Britain and Ireland.

Four years ago, on the night of 8 November 2016, I sat up all night in an hotel in Kazimierz, the old Jewish quarter in Kraków, watching the last US presidential election in disbelief.

I had spent that day visiting many of the synagogues and the remaining Jewish cemeteries Kazimierz and the previous day was spent in Auschwitz.

I could not believe what was happening in America. I fell back on the dark humour that journalists understand: in another country pretending to be a democracy, where the candidate who lost the popular vote by 3 million votes, they would be waiting for an American invasion to restore democracy.

Leonard Cohen had died the day before, on 7 November 2016, the day I was visiting Auschwitz. We can never really guess how he might have responded to the election of Donald Trump, but as I prepare to sit up all night tonight I still find wisdom in the lyrics of his song ‘Democracy’:

Democracy is coming to the USA.

and after years of a rising tide of

I wonder tonight, as I settle down to watch this election in its closing hours, can I share Leonard Cohen’s hope, ‘Democracy is coming to the USA’?

Leonard Cohen cared about America but was horrified and revolted by what was happening to it. At a time when the US is in more danger of foundering than ever before, Cohen’s words are the perfect anthem for these times:

Sail on, sail on
oh mighty ship of State,
to the shores of need
past the reefs of greed
through the squalls of hate.

Tonight, as the world watches as the dominant superpower is on the verge of re-electing or sacking a bigoted bully with fascist tendencies for president, I think too of the many of the lines Leonard Cohen cut out of this song, and how relevant they are tonight – lines such as ‘Concentration camp behind a smile’, or,

Almost three decades after he completed this song in 1992, Leonard Cohen continues to speak to these times as though he were writing today.

‘Democracy’ is the sixth of nine tracks on The Future, the ninth studio album by Leonard Cohen, released on 24 November 1992. Almost an hour in length, it was Cohen’s longest album at the time.

Both the fall of the Berlin Wall and the 1992 Los Angeles riots took place while Cohen was writing and recording the album, expressing his sense of the world’s turbulence. The album was recorded with a large cast of musicians and engineers in several studios.

The album built on the success of his previous album, I’m Your Man, and sold a quarter of a million copies in the US, which until then had not been enthusiastic about Cohen’s albums.

In an interview with Paul Zollo in Songwriters on Songwriting, Leonard Cohen spoke at length about ‘Democracy.’ He admitted that he wrote 60 verses for the song. As he watched the fall of the Berlin Wall, he recalled, ‘everyone was saying democracy is coming to the east.’ But he thought to himself, ‘I think a lot of suffering will be the consequence of this wall coming down.’

‘But then I asked myself, “Where is democracy really coming?” And it was the USA … So while everyone was rejoicing, I thought it wasn’t going to be like that, euphoric, the honeymoon. So it was these world events that occasioned the song. And also the love of America. Because I think the irony of America is transcendent in the song.

According to Ira Nadel’s book Various Positions (1996), the title track, ‘The Future,’ was originally called ‘If You Could See What's Coming Next.’ I cannot predict the future, I cannot see what is coming next. But this evening I wonder whether the US is ‘the real laboratory of democracy’ or whether we are watching the end of democracy in the USA, perhaps even the beginning of the end of the USA.

It’s coming through a hole in the air
From those nights in Tiananmen Square
It’s coming from the feel
That this ain’t exactly real
Or it’s real, but it ain’t exactly there
From the wars against disorder
From the sirens night and day
From the fires of the homeless
From the ashes of the gay
Democracy is coming to the USA

It’s coming through a crack in the wall
On a visionary flood of alcohol
From the staggering account
Of the Sermon on the Mount
Which I don’t pretend to understand at all
It's coming from the silence
On the dock of the bay,
From the brave, the bold, the battered
Heart of Chevrolet
Democracy is coming to the USA

It’s coming from the sorrow in the street
The holy places where the races meet
From the homicidal bitchin’
That goes down in every kitchen To determine who will serve and who will eat
From the wells of disappointment
Where the women kneel to pray
For the grace of God in the desert here
And the desert far away:
Democracy is coming to the USA

It’s coming from the women and the men
O baby, we’ll be making love again
We’ll be going down so deep
The river’s going to weep,
And the mountain’s going to shout Amen
It’s coming like the tidal flood
Beneath the lunar sway
Imperial, mysterious
In amorous array
Democracy is coming to the USA

Sail on, sail on

I’m sentimental, if you know what I mean
I love the country but I can’t stand the scene
And I’m neither left or right
I’m just staying home tonight
Getting lost in that hopeless little screen
But I’m stubborn as those garbage bags
That Time cannot decay
I’m junk but I’m still holding up
This little wild bouquet
Democracy is coming to the USA