Christmas cards with
memories of Cambridge
and a link with Darwin 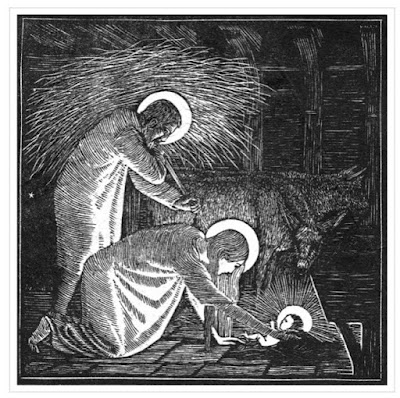 As the years pass and as I get older, I seem to have become more remiss each year about sending Christmas cards. This year’s cards were sent out in batches and snatches, and I fear some may never arrive on time or at the right address.

It seems easier for many of my friends to post a Christmas scene and catch-all greetings on their social media pages … and it brings a smile to see them. And yet, there is still a real joy in opening and receiving a Christmas card I never expected, from someone I had thought would never think of sending one.

I am surprised by the Christmas cards my colleagues send themselves: snowmen, reindeer, trains, and romantic Victorian and Dickensian scenes of snow-covered streets lined with timber-framed Tudor shops.

I prefer to send Christmas cards with images that are reminders of the meaning of Christmas, and prefer to buy ones from causes that I support and believe in.

It came too late for buying Christmas cards this year when I noticed the advertising in the English religious press by the Raverat Archive for Christmas cards crafted by Charles Darwin’s granddaughter, Gwen Raverat.

Gwen Raverat (1885-1957), was an English wood engraver and a founder member of the Society of Wood Engravers. Her memoir Period Piece was published in 1952.

She was born Gwendolen Mary Darwin in Cambridge on 26 August 1885, the daughter of the astronomer Sir George Howard Darwin and his wife Maud (née du Puy).

Not only was her grandfather the naturalist Charles Darwin – giving her a connection back to Lichfield through Erasmus Darwin – but she had an interesting family circle: her cousins included the composer Ralph Vaughan Williams and the poet Frances Cornford; her sister Margaret married the surgeon and author Sir Geoffrey Keynes, a brother of John Maynard Keynes.

Gwen married the French painter Jacques Raverat (1885-1925) in 1911. They were active in the Bloomsbury Group until they moved to the south of France, where they lived in Vence, near Nice, until his death from multiple sclerosis in 1925. One daughter, Elisabeth (1916-2014), married the Norwegian politician and diplomat Edvard Hambro; the other daughter, Sophie Jane (1919-2011), married the Cambridge scholar MGM Pryor and later Charles Gurney.

She was one of the first wood engravers recognised as modern. She went to the Slade School in 1908, but stood outside the groups growing up at the time, the group that gathered around Eric Gill at Ditchling and the group that grew up at the Central School of Arts and Crafts around Noel Rooke.

She played a significant part in the revival of wood engraving in Britain at the beginning of the 20th century. By 1914, she had completed some 60 wood engravings.

She was involved in producing one of the first two books illustrated with modern wood engravings: Spring Morning by her cousin Frances Cornford was published by the Poetry Bookshop in 1915. Much of her work was for friends from Cambridge and appeared in books with small editions.

Most of her commissions for book illustrations date from the 1930s. The first was for a set of engravings for Kenneth Grahame’s classic anthology, The Cambridge Book of Poetry for Children (1932), published by the Cambridge University Press.

She lived in or near Cambridge for most of her life, Cambridge was always at the centre of her life. Darwin College was once her childhood home, Newnham Grange. She moved into the Old Rectory at Harlton, near Cambridge, in 1928, and the house was the model for her engravings for The Runaway. In 1946, she moved into the Old Granary, Silver Street. The house was at the end of the garden of Newnham Grange, where she was born, and she lived there until she died.

When she was 62, she started writing her classic childhood memoir Period Piece, illustrated with her own line drawings. It was published in 1952 – the year I was born – and it has not been out of print since then.

In Period Piece, she recalled how ‘nearly all the life of Cambridge flowed backward and forward under the bridge, and before our house.’ In her Edwardian fashion, she was disturbed by the behaviour of undergraduates and the scenes she saw on Silver Bridge and below in the Anchor. In Period Piece, she describes the Anchor as ‘a mysterious haunt, full of Bad Women.’ She believed that ‘men got drunk; women didn’t.’

Her memories were from an age long gone. Later, the Anchor was a haunt of the poet Ted Hughes. Today, in normal, non-pandemic days, it is popular in term time with undergraduates from Pembroke and Queens or ordinands from Ridley Hall – and graduates from Darwin College.

Outside term time, in normal tourist seasons, the Anchor is all a-bustle, busy with tourists queuing for a punt or recalling their first experiences of seeing Cambridge from the Backs, while the bridge is crammed with visitors staring in wonder at the Mathematical Bridge.

Gwen gave up wood engraving after a stroke in 1951. She died on 11 February 1957 and is buried in the Trumpington Extension Cemetery, Cambridge.

Gwen Raverat made five Christmas card wood-engravings: the Shepherds; the Nativity; the Festival of Christmas; the Three Kings; the Manger.

The cards are printed on 100% recycled stock folded to A6 (105 x 148 mm). The inside is blank and the back has the wood-engraving title and other information. Each card comes with a brown, 100% recycled envelope.

I am still searching for the elusive link between the Darwin family and the Comberfords of Comberford Hall. I am sorry I missed the opportunity to buy these cards this year. I must remember them for Christmas next year … and remember to send them. 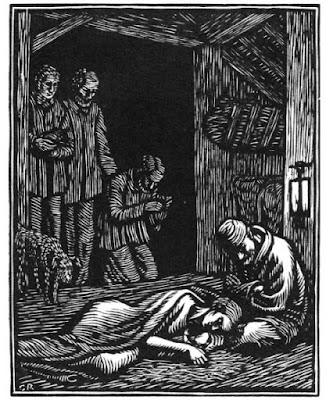