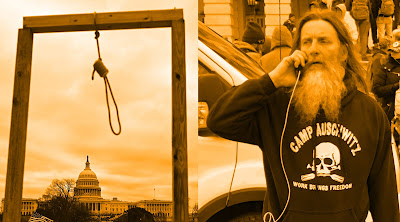 The ugly face of the far-right in Washington last week

I sat up late into the night, watching the impeachment vote in Congress, and President Trump’s later egregious video from the White House.

I noticed, like many, that Trump’s video last night not only made no reference to his impeachment – a vote he cannot say was stolen – but how he still refuses to show any sense of responsibility or remorse for last week’s treasonous insurrection in Washington DC and the storming of the Capitol.

The responses have been interesting when I have referred to Trump in recent days in my blog postings or on social media.

One comment posted earlier this month read: ‘Trump is the greatest president of my lifetime. It is shocking how many erudite individuals such as yourself haven’t bothered to find out the truth about this man and why millions and millions of Americans love and support him ... Please show some curiousity (sic) about who Trump really is, why he was elected, the forces he is fighting, and why we love him and his family so much.’

And he (or she) goes on and on … He knows who I am but hid behind the pseudonym ‘Liberty.’ I do not know who he is, and he has not returned since last week’s riots to speak about truth or about love.

So, I thought I might just show how, as one ‘erudite individual,’ I have bothered to find out about this man and the many people who marched to his orders in Washington last week, those forces he is fighting with though not against.

One of the many horrifying images among the mob that went on the rampage last week shows a long-haired, long-bearded man wearing a black ‘Camp Auschwitz’ hoodie with the SS skull and crossbones.

In smaller letters is the phrase ‘Work Brings Freedom’ – a rough translation of the slogan Arbeit macht frei above the gates into Auschwitz and other Nazi concentration camps. The back of his hoodie said ‘Staff.’ He has been identified as Robert Keith Packer, and was arrested in Virginia yesterday.

Some reports of the riot include a photograph of a ‘Proud Boys’ protester wearing a T-shirt with the initials ‘6MWE’ above yellow symbols of Italian Fascism. The slogan is an acronym for ‘Six Million Wasn’t Enough’ – a chilling reference to the six million Jews murdered in the Holocaust.

It now appears, after fact-checking, that the image is from a Proud Boys protest last month rather than from last week. But it reveals the disgusting ideology at the heart of the Proud Boys movement. 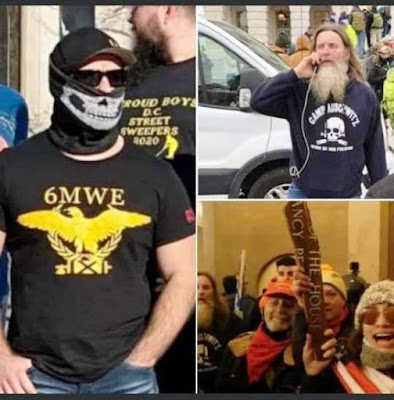 A Proud Boys protester … not at the Capitol last week, but showing his true colours and the company Trump keeps

The Proud Boys, the Oath Keepers, and the Three Percenters are among the more prominent violent far-right groups that were prominent in last week’s rally addressed by Trump and in the mayhem that followed.

During a presidential debate in September, Trump told the Proud Boys to ‘stand back and stand by.’

Prominent Holocaust deniers and neo-Nazis were part of the Capitol mob, and some Twitter users said their symbols included a swastika, although this has not been verified. The mob who wreaked havoc in Washington last week brought Nazi paraphernalia, Confederate flags, nooses and other hate signs into the Capitol.

The slogans and numerals displayed by Trump’s supporters on flags, signs and clothing included codes drawn from a variety of conspiracy theories and extremist ideologies shared on the far-right.

The slogan ‘America First’ has been used by Trump to summarise his foreign policy. But his use of this slogan has been criticised by the ADL, pointing out that it origins are in anti-Semitic demands to keep the US out of World War II.

Several members of the mob wore or carried signs invoking the QAnon conspiracy theory, which is laced with anti-Semitism and false allegations that a Democrat-run cabal of paedophiles is plotting to harvest the blood of children and take down Trump. In reference to this, one woman in last week’s riotous protests carried a sign saying, ‘The children cry out for justice.’

Other protesters carried a Confederate battle flag into the Capitol building, and a noose – a symbol of racist violence – was placed outside. In one instance, after members of the mob destroyed camera equipment from the Associated Press and made a noose out of the cords.

Other flags bore the phrase ‘when tyranny becomes law, rebellion becomes duty’ – a version of a quote dubiously attributed to Thomas Jefferson – and the Roman numeral III.

The numeral ‘III’ is the logo of the Three Percenters, also known as the III% militia. But, as 1-11, this is a numeric symbol for the Aryan Knights, a white supremacist group inspired by the ‘Aryan’ ideology the Nazis: giving numerical symbols to letters, 1 and 11 mean A and K, the Aryan Knights.

The symbol 109/110 also appeared last week. The figure 109 is white supremacist numeric shorthand for the number of countries anti-Semites claim Jews have been expelled from. In calling for the expulsion of Jews from the US, they often refer to the US as the 110th.

In the same way, 13/52 and 13/90 are numeric codes used by white supremacists who claim that Blacks make up 13% of the US population but commit 52% of all murders and 90% of all violent interracial crime.

Another flag used by the mob shows a coiled snake above the phrase ‘Don’t Tread on Me.’ The ‘Gadsden flag’ was used by Jerad and Amanda Miller, who killed two police officers and a civilian in the Las Vegas shootings in 2014.The Millers reportedly placed the Gadsden Flag on the corpse of one of the police officers they killed.

The Gadsden flag was draped around the shoulders of Rosanne Boyland when she trampled to death during the riots last week.

Other symbols include mediaeval helmets, knights’ weapons and symbols linked with the Crusaders and Templars, supposedly harkening back to an era when white, Christian warriors slaughtered Muslims and Jews. 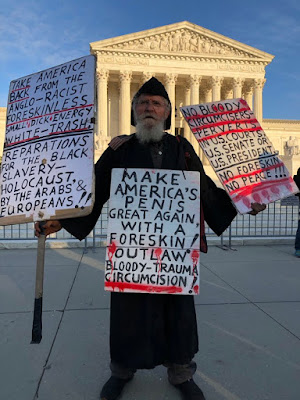 The images and slogans used by an ‘intactivist’ protester in front of the US Supreme Court in Washington last October were seen in Washington DC last week. Some protesters carried signs reading ‘circumcision is the mark of the beast of satan’ and ‘outlaw satan’s circumcision.’

The Oath Keepers try to recruit members from among active or retired military, first responders and the police.

These are some of the people who travelled to Washington last week to support Trump and who were encouraged by him to march down Pennsylvania Avenue to the Capitol.

These extremists hope to trigger what they call the ‘Great Revolution,’ based on a fictionalised account of a government takeover and race war in which Jews would be exterminated.

The anonymous ‘Q’ has approvingly retweeted the anti-Semitic image of a knife-wielding Jew wearing a Star of David necklace, standing knee-deep in the blood of Russians, Poles, Hungarians and Ukrainians. In recent days, QAnon has targeted the Jewish billionaire philanthropist and investor George Soros, portraying him the primary figure shaping and controlling world events. A century ago, the Rothschilds, a family of Jewish bankers, were depicted in the same way.

QAnon members and other far-right activists regularly mark Jews with triple parentheses, a covert means of outing those they identify as usurpers, outsiders, and not true members of the white race. But the three brackets on each side add up to six, another reference to the six million victims of the Holocaust.

Kyle Chapman, a leader of the Proud Boys, recently threatened to ‘confront the Zionist criminals who wish to destroy our civilization.’ The West, he explained ‘was built by the White Race alone and we owe nothing to any other race.’ He uses the term ‘white genocide’ as a shorthand way of claiming the white population in the US will soon be overwhelmed. A popular white supremacist slogan, konw as the ‘14 words’ and seen on signs outside the Capitol last week, says ‘We must secure the existence of our people and a future for white children.’

Many of these symbols, slogans and flags have been analysed in a widely-published essay by Professor Jonathan D Sarna of Brandeis University, a scholar of American anti-Semitism, and they have been explained in detail on the websites of the World Jewish Congress and the Anti-Defamation League.

He points out how the slogan ‘white genocide’ comes from a larger document, ‘The White Genocide Manifesto,’ drawn up by David Lane, one of the conspirators behind the murder of the Jewish radio host Alan Berg in 1984. The manifesto also blames what it calls the ‘Zionist occupation governments of America’ for homosexuality and abortion.

QAnon followers, the Proud Boys and the other far-right groups prominent in Washington last week, believe they are living out the great fantasy played out in The Turner Diaries, a 1978 dystopian novel, by William Luther Pierce. The novel depicts the violent overthrow of the US government, nuclear conflagration, race war and the ultimate extermination of non-whites and ‘undesirable racial elements among the remaining white population.’

Seyward Darby pointed out in The New York Times last week that the gallows erected at the Capitol recalls the novel’s depiction of ‘the day of the rope,’ when so-called betrayers of their race were lynched. Professor Sarna points out that Darby could have gone on to refer to the way the novel subsequently depicts ‘a war to the death with the Jew.’

The book warns Jews that their ‘day is coming.’ When it does, at the novel’s conclusion, mass lynchings and a takeover of Washington set off a worldwide conflagration. Within a few days, ‘the throat of the last Jewish survivor in the last kibbutz and in the last, smoking ruin in Tel Aviv had been cut.’

The use of the The Turner Diaries and the anti-Semitic images from the Capitol last week are timely reminders of the place Jews hold in the intentions of the mob beloved by Trump.

I described last week’s events in Washington as ‘a planned coup attempt, to be compared with Hitler in Munich.’ I asked, ‘Why has Trump not been arrested for sedition and armed rebellion? He talked this up, rallied the mob, and must be jailed.’

One response from Ireland said, ‘It only gets better for the American people. They now have 4 years of a Marxist President with Biden. Biden is pro abortion pro gay marriage and wants to water down the church. Biden is vile.’ The conspiracy theories have their advocates in Ireland too.

In his first statements on the violence, Trump called on his supporters to be peaceful, but still lauded them as ‘very special,’ adding that ‘we love you.’

‘What is needed now is for us to listen to one another, not silence one another,’ he said in last night’s video. ‘All of us can choose by our actions to rise above the rancour and find common ground and shared purpose.’ 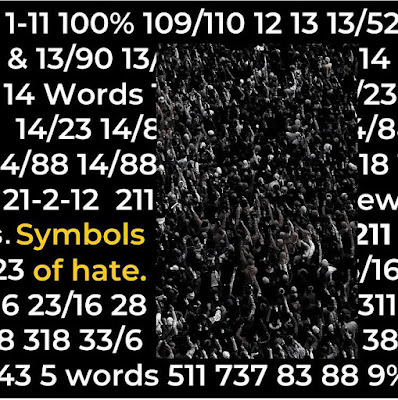