Why a teenage football fan
turned to a paper round,
journalism and justice 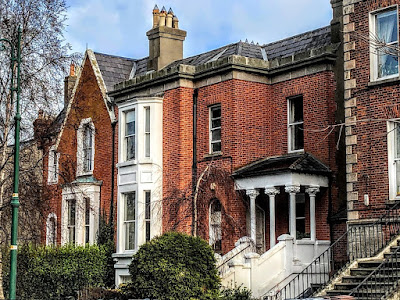 As a young teenager, I came to appreciate the architectural details and variety found on Kenilworth Square (Photograph: Patrick Comerford, 2021)

I was writing yesterday about Kenilworth Square in Rathgar, the architecture of its houses, and the people who lived there over the past century and a half.

I mentioned, in passing, that in my early teens I got to know this square and the streets and houses in the immediate area.

I think I may have been about 11 or 12 when I walked around Kenilworth Square and along those houses almost every weekend. My uncle Arthur Comerford, who lived nearby on Rathgar Road, was my father’s elder half-brother and he and his wife, my Aunt Kathleen, had been my godparents at my Baptism.

In early 1963, when I was 11, I had cycled with friends to Glenmalure Park in Milltown and was among 18,000 people who watched Manchester United, including Harry Gregg, Noel Cantwell, Nobby Stiles, John Giles, Bobby Charlton and Denis Law, win 4-3 against Coventry, then in the Third Division, during a harsh winter that had shut down English football.

While my father seemed to spend most Sundays playing golf in Rathfarnham, Arthur must have taken pity on me and recognised my interest in football. He was a member of Bohemians, a leading soccer club, and offered to bring me to Bohs’ matches every week during the playing season.

Every second Sunday, we would take the bus from Rathgar to Phibsboro to see the ‘Bohs’ play at Dalymount Park. Sometimes he even used his membership to get me into the players’ changing rooms to collect their autographs and the autographs of visiting teams. He also generously gave me pocket money, encouraging me to buy my own sweets and soft drinks to sustain me through each match.

Then, on most alternate Sundays, we went to away matches … Drumcondra and Shelbourne at Tolka Park, Shamrock Rovers at Glenmalure Park in Milltown, Saint Patrick’s Athletic at Richmond Park in Inchicore, Transport at the Greyhound Stadium in Harold’s Cross … he even took me to see Stanley Matthews, then 48, and Stoke City play a combined Bohs/Rovers team at Dalymount Park.

My parents were then living in Harold’s Cross, and as I made my way across to Rathgar Road on those Sunday afternoons, left to my own devices, I would walk two different sides of Kenilworth Square each Sunday, growing in my appreciation of the different architectural styles and details of each house on the square.

There were other houses and buildings in the area too: the villas on Rathgar Avenue, the curious decorative gothic details of Leicester Lodge, and the new synagogue built on the other side of Leicester Avenue. 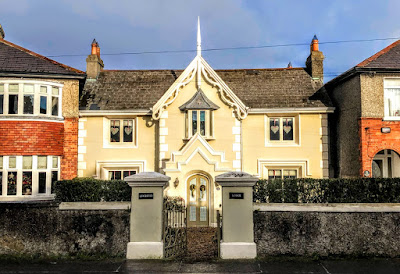 During this time, I had innocently put my eyes on what I think was a toy or replica, shield-shaped police badge in the window of a newsagent’s shop in Harold’s Cross, O’Beirne’s. The shop then faced the top of Leinster Road but is no longer there.

I did not have enough money to buy this playful item, and my father refused to countenance giving me the money to buy it. I was told I would have to save for it, although my weekly pocket money – to me, at least – appeared to be meagre.

I asked the shopkeeper whether he could reserve it for me until I had saved up enough to pay for it. As a family, we bought our newspapers, magazines and comics in another newsagent’s shop, known as the Magnet, so he could not have known who I was. But he was kindly and he agreed to take it out of the window and hold it for me, for at least a few weeks.

I cut down on the amount of sweets and soft drinks I bought at Sunday matches, and saved some meagre coins week-by-week, until I had enough to buy this one coveted item.

Today, I cannot imagine why I wanted such a trifling thing, or how I imagined I was going to play with it. It seems childish and immature for a young teenage boy at that age. I simply wanted it, and added it to my small collection of other toys in a low, dark cupboard beside the fridge.

But my father came across it one day. I was not prepared for his fury and his anger. He could never show me love or affection, but he knew how to express disapproval and rejection. At first, he accused me of shoplifting and theft, and demanded that I return to the shop and apologise. He stood me before my sibglings and called me a thief and a liar.

I mumbled as I tried to explain that I had bought it with my own savings, but he demanded to know in forensic detail how I had managed to save for it.

When I finally explained how I had managed to save for this, Sunday after Sunday, he demanded that I return to the shop, ask for a refund, and return the money to my uncle, his half-brother.

I debated with myself which were the worst options: to embarrass myself before the shopkeeper, to humiliate myself before my uncle, or to stand up to the capricious bullying of my father.

Valour won the day, and I stood up to my father. It was not the last time.

His spiteful response was to try to stop me going to Sunday football matches with my uncle. But Arthur was understanding and my father failed. 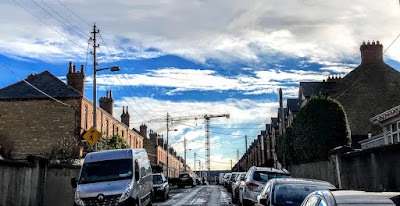 Casimir Road … one of the streets that was part of my paper round in the mid-1960s (Photograph: Patrick Comerford, 2021)

By now, I was determined not only to stand up to bullying, no matter who the bully was, but to be confident too of my own integrity, and to try to be as independent financially as far as possible, even as a young teenager.

In the summer that followed, I walked into yet another local newsagent’s shop, Dwyers, and asked for a newspaper round. Every morning and evening and once on Sundays in the summer of 1965 and 1966, I delivered newspapers, magazines and comics along a route that took me through Kenilworth Park, Wilfrid Road, Casimir Road, Casimir Avenue, Sion Hill Avenue and the lower end of Lower Kimmage Road.

Sometimes there was a second morning round if the English papers arrived late. Occasionally, towards the end of the week, I got an extra round on one or two days, with magazines such as the Radio Times, Time and Newsweek, and religious newspapers such as the Universe, the Church of Ireland Gazette and the Jewish Chronicle.

And, at times, when another boy failed to turn up, my paper round was extended to Kenilworth Square, Kenilworth Road, Westfield Road, Clareville Road, and even parts of Leinster Road, Leinster Road West and Effra Road.

I enjoyed waiting for papers to be marked up on the counter by the full-time staff. I cannot even remember their names now, but they gave me an opportunity to read the newspapers and news magazines. Over those two summers, my teenage interests shifted from sports to politics and international affairs.

On my rounds, I had a second opportunity to read the front pages in borrowed snatches of time. I came to learn the politics of each household based on the newspapers I delivered, and I learned to appreciate the social and religious diversity of the area: our next-door neighbour was a Methodist widow; the Mahon family four doors away were parishioners in the now closed Church of Ireland parish church; their next door neighbours, Dr Samuel Davis and his family, were Orthodox Jews with a long back garden; a family across the street went to the Plymouth Brethren Gospel Hall in Rathmines.

Local newspapers delivered at the end of the week revealed the provincial origins of other families.

In the gaps between deliveries, I became an avaricious reader in the library at the end of Leinster Road, facing Rathmines Town Hall.

I was answering to myself for my own financial independence and my use of time, and developing my appreciation of cultural, political and religious diversity and pluralism in a society that, in retrospect, still seems, in a contradictory way, to have been very monochrome.

I returned to that paper round during school holidays at Christmas and Easter throughout 1965 and 1966; I was 13 and 14. By 1967 and 1968, at 15 and 16, I was working as a copyholder or proof-reader’s assistant at Irish Printers, first in Aungier Street and then on Donore Avenue. I earned enough to pay for my own small delights, including regular newspapers, during term time when I was a boarder in Gormanston.

I have only one memory of kindness shown by my father after that incident. I recall the summer of 1967, during a summer holiday at the Park Hotel in Virginia, and how he occasionally took me out in a boat on Lough Ramor and taught me to row. The Six-Day War had taken place that June, and he shared memories of his childhood friend Chaim Herzog (they were three months apart in age), who had become famous as a military commentator on radio programmes and then became military governor of East Jerusalem and Judea and Samaria or the West Bank.

Because of a dysfunctional childhood, my childhood memories are sometimes suppressed, jumbled and difficult to access. But I was reminded last week of that police badge in the shop window in Harold’s Cross as I watched on television the thin line of police facing the violent coup attempt and Trump-inspired insurrection. I had never forgotten the beauty of Kenilworth Square or Arthur’s kindness. But it took some days to recall the details of that paper round and the names of the newsgaents and former neighbours.

I still cannot fathom why I ever wanted that silly badge. But, perhaps, that display of parental envy and bullying back in 1963 or 1964 took a positive turn, shaping my curiosity for news, newspapers and newsprint. Without doubt, it helped to form my adult pacifism, to shape my values of justice, and to develop my appreciation of diversity and pluralism.

As for soccer, I never became a Bohs fan. My interests turned to rugby, cricket and later to rowing, but I became an armchair fan of Aston Villa and Spurs.

In one small stretch of Lower Kimmage Road, there was diversity and variety that challenges popular images of the monochrome 1960s (Photograph: Patrick Comerford, 2021)

Your blog is fascinating. I first came to Dublin in the fall of 1968. I was 31, newly married, pregnant. Although my husband was Irish, he was from Belfast. I was totally innocent (and ignorant) of all that meant. We found a flat on Zion Road in Rathgar. The story continues but I'll save that for another day.

I remember the Magnet - I think it was run by Greg and his mother (may need correcting there).