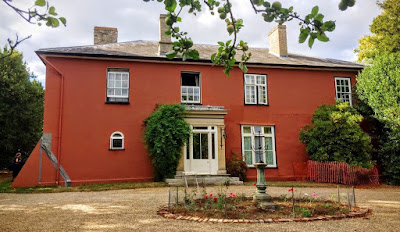 The monastery at Tolleshunt Knights was built around the old rectory (Photograph: Patrick Comerford)

This week is Holy Week in the Orthodox Church. My photographs this morning (26 April) are from the Monastery of Saint John the Evangelist, Tolleshunt Knights, Essex.

For many years, I spent a day almost each summer on a retreat in the Monastery of Saint John the Evangelist in Tolleshunt Knights, Essex. The monastery is about 75 km south-east of Cambridge, and these annual visits were organised by the Institute for Orthodox Christian Studies as part of the patristics summer school held each year in Sidney Sussex College, Cambridge.

The Church of England agreed to sell All Saints’ Church and the rectory to the Orthodox Church in 1958. Since then, the church has been carefully restored and is now attached to the Monastery of Saint John the Baptist, which is built around the former rectory in Tolleshunt Knights.

The mixed community of monks and nuns is the oldest Orthodox religious community in Britain. It was founded by Elder Sophrony (Sakharov) with an initial membership of six drawn from a number of countries.

Father Sophrony (1896-1993) was originally a painter who developed a longing to devote his art to exploring the nature of Divine reality. He was born Sergei Symeonovich Sakharov in Moscow 120 years ago on 23 September 1896, the son of Russian Orthodox parents.

As a child, he prayed daily, later recalling that he would pray for 45 minutes without stress. Even as a child, he claimed to have experienced the Uncreated Light, but thought casually that every other child had similar experiences.

The end of World War II and the catastrophe of the Greek Civil War left Father Sophrony in a difficult position as a non-Greek on Mount Athos. In 1947, he returned to Paris, where he moved into a Russian old people’s home in St Genevieve-des-Bois as the assistant chaplain and a father confessor. There his work led to the formation of a small community that centred its prayer life on the Jesus Prayer.

In 1948, he produced his first edition of Staretz Silouan outlining Saint Silouan’s principles, including prayer for the whole world, God-forsakenness and the idea of all humanity being connected. In Paris, he also worked from 1950 to 1957 with Vladimir Lossky who influenced his thinking on many contemporary issues, and his Trinitarian thought and its application to the Church and humanity.

In 1952, Father Sophrony produced a second edition of Staretz Silouan, which brought Saint Silouan to the attention of a wider public. Meanwhile, the small community he had gathered around wanted to explore the monastic life. With the help of Rosemary Edmunds, they bought the Old Rectory at Tolleshunt Knights in 1958, and the Community of Saint John the Baptist was formed within a year.

From the beginning, this was a mixed community, and the first six members were both monks and nuns. The original chapel was laid out in the Old Rectory by Father Sophrony. The iconostasis or icon screen in this chapel is the work of two of the most important Russian émigré icon writers of the last century, Leonid Alexandrovich Ouspensky (1902-1987) and his friend and colleague, Father Gregory Ivanovich Krug (1908-1969).

Ouspensky, who painted the royal doors in the iconostasis, is known as an important artist and iconographer of the 20th century, and for his seminal books on the theology of icons, written with Vladimir Lossky, including The Meaning of Icons and The Theology of the Icon. These books introduced Western readers to the spiritual and theological understanding of icons.

The influence of Ouspensky and Father Gregory is also seen on the walls of the refectory in the monastery. These are decorated with frescoes and murals using oil and turpentine on plaster, to look like Byzantine frescoes, under the direction of Sister Maria, who had studied iconography in Paris with Ouspensky.

The Monastery has been under the authority of the Ecumenical Patriarchate of Constantinople since 1965. The main spiritual practices are the repetition of the Jesus Prayer for about four hours a day and the serving of the Divine Liturgy three or four times a week, practices that were inspired by Father Sophrony’s experiences on Mount Athos.

Father Peter joined the monastery in 2002 at the age of 25. His PhD, on the mystery of receiving and transmitting the word of God in the teachings of Father Sophrony, was recently published as his first book.

The community includes about 40 men and women – the majority are nuns, with a smaller number of monks, and they come from about 14 nations. In the words of one nun, it is ‘a melting pot.’ 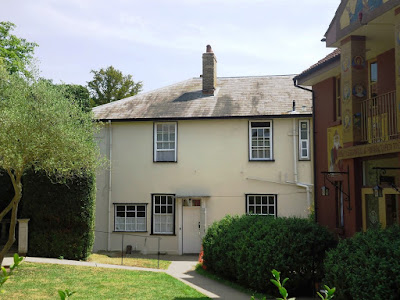 The Old Rectory and monastic buildings at the Monastery of Saint John the Baptist in Tolleshunt Knights (Photograph: Patrick Comerford)

5 Then Jesus began to say to them, ‘Beware that no one leads you astray. 6 Many will come in my name and say, “I am he!” and they will lead many astray. 7 When you hear of wars and rumours of wars, do not be alarmed; this must take place, but the end is still to come. 8 For nation will rise against nation, and kingdom against kingdom; there will be earthquakes in various places; there will be famines. This is but the beginning of the birth pangs.

9 ‘As for yourselves, beware; for they will hand you over to councils; and you will be beaten in synagogues; and you will stand before governors and kings because of me, as a testimony to them. 10 And the good news must first be proclaimed to all nations. 11 When they bring you to trial and hand you over, do not worry beforehand about what you are to say; but say whatever is given you at that time, for it is not you who speak, but the Holy Spirit. 12 Brother will betray brother to death, and a father his child, and children will rise against parents and have them put to death; 13 and you will be hated by all because of my name. But the one who endures to the end will be saved. 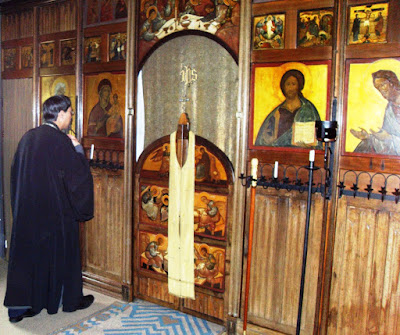 Inside the original monastic chapel in the former Rectory in Tolleshunt Knights (Photograph: Patrick Comerford)

The Prayer in the USPG Prayer Diary today (26 April 2021, Saint Mark the Evangelist) invites us to pray:

Let us give thanks for the life and ministry of Saint Mark the Evangelist.

The doors of the iconstasis are the work of Leonid Ouspensky (Photograph: Patrick Comerford) 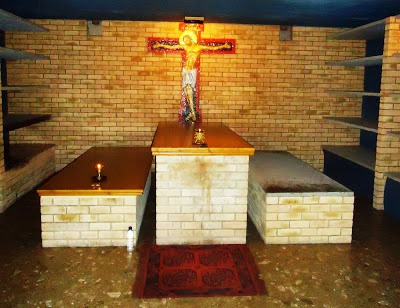 The tomb of Father Sophrony in the crypt in Saint John’s Monastery in Tolleshunt Knights (Photograph: Patrick Comerford)