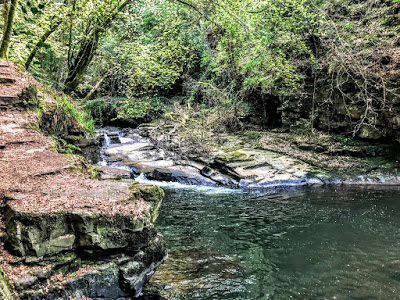 Walking in the Clare Glens … we failed to find the trail on the Tipperary side but got to see the cascades and smaller waterfalls (Photograph: Patrick Comerford, 2021)

I visited the Clare Glens at the end of last week for the breath-taking scenery, the wild dense forest, the calm rushing of the crystal clear waters and waterfalls, and the riverside walks through the wooded area and along a path up the red sandstone gorge.

This area is about 4 km from Newport, Co Tipperary, and about 5km from Murroe, Co Limerick. There is a carpark near the entrance on the Newport side, and a children's play area and picnic area.

There is a signposted trail along of a walkway on both banks of the river, and an opening below a waterfall known as the Big Eas. The Limerick path of the Clare Glens was widened and levelled in the 1990s to allow emergency vehicles access to 3 km long walk.

The site is a listed European Special Area of Conservation, designated for its areas of oak woodland habitat and a species of rare fern. The river is used as a kayaking and canoeing venue, and it is possible to kayak down the waterfalls and rapids.

The Clare Glens is generally described as a Looped Walk and while there is indeed a firm walking track on the Limerick side. But we failed on a number of attempts to find and follow the signposts on the Tipperary side of the water.

Over a stretch of 2 km, the Clare River has cut a deep ravine into the soft sandstone over which it flows. On its way, it descends in a series of cascades creating a dramatic riverscape. The path runs along the top of the ravine, and there are glimpses of the river down through the densely wooded slopes of which pine, holly and hazel are the principal species.

We tried to follow several narrow paths on the Tipperary side that lead down to the banks of the river, but they are steep and muddy with slippery rocks and tree roots.

We got close to some of the cascades to watch the water surging over the cliffs into quiet plunge pools before tumbling on again to the next drop. In places the channel is so narrow that the river gushes past in a welter of white water and in a thundering torrent beneath the woodland canopy.

Having failed to complete the walk along the Tipperary side of the Glen, we returned to the small bridge at the entrance, and set along the path on the Limerick side of the river, until we reached a bridge that crosses the river.

We never made it up to top of the loop, where a second bridge gives a fine view of the Big Eas waterfall. I understand the full walk takes about two hours in good weather and covers 4 km.

We ended the afternoon with a picnic in the sunshine in the car park on the Newport side of the river, and promised to return later this summer to catch that view of the Big Eas Waterfall. 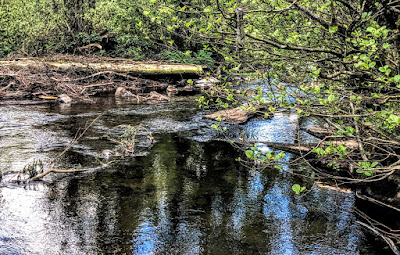 The Clare Glens are known for breath-taking scenery, wild dense forest and the calm rushing of the crystal clear waters and waterfalls (Photographs: Patrick Comerford, 2021)