‘You are robed in glory and majesty,
wrapping yourself in light as in a garment’ 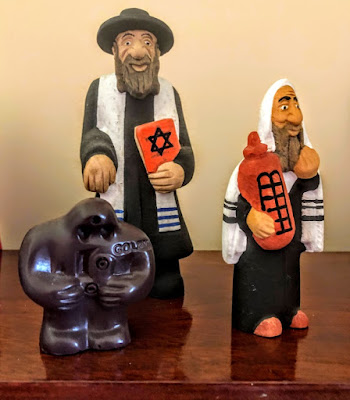 Figurines bought in the Jewish Quarters of Kazimierz in Kraków and Josefov in Prague (Photograph: Patrick Comerford, 2021)

During my visit to Kraków, I bought a number of figures in Jewish Quarter in Kazimierz: one from a stall outside the Remah Synagogue shows a Jewish man with a broad black hat, a tallit or prayer shawl on his shoulders and holding a Bible marked with a large Star of David; the other, bought in a shop selling Judaica, depicts a man with his tallit covering his head, holding the Torah scrolls on his shoulder.

They now stand on a bookshelf in the Rectory in Askeaton, beside a figurine of the Golem, bought in Josefov, the old Jewish Quarter in Prague, and a glass figure of a rabbi bought in a Jewish artist’s shop in Murano.

At the time, I jested that I never knew I had so many lookalikes. But, occasionally, some of the figures were disturbing, presenting stylised images that seemed to draw on stereotypical images used in anti-Semitic portrayals of ghetto Jews in central Europe: large or crooked noses, grabbing hold of coins or money bags, leering grins and grimaces.

The World Jewish Congress published a disturbing report this week on the alarming rise in anti-Semitism around the world in the month of May alone.

But this week the city of Kraków also announced measures to stop the sale of these figurines depicting Jews, often holding money, which are seen as good luck charms. The objects have long divided opinion, with some arguing they reinforce harmful stereotypes but others saying they are a harmless tradition.

‘These figures are antisemitic and it is time for us to realise that,’ Robert Piaskowski, the mayor’s representative for culture, told Gazeta Wyborcza. ‘In a city like Kraków, with such a difficult heritage and a painful past, they should not be sold.’

It is estimated that about a quarter of Kraków’s population was Jewish Before World War II. However, almost all the city’s Jews were murdered during the German occupation and in the Holocaust. Some managed to escape and others left after the war, amid a wave of anti-Jewish violence in Poland.

Robert Piaskowski says that the city’s official position was formed after consulting Jewish communities, various institutions, and businesses that sell the figures.

The figurines first emerged in the 19th century, but only in the 1990s began to include figures of Jews holding money. The figurines with the coins were first described in articles from 2000, with the authors saying the phenomenon is recent, and that the figurines probably date back to the period after the collapse of Communism in 1989.

Sometimes those figures are turned upside down by the owner to symbolically take the Jews’ money in the belief it will bring financial good fortune.

A group of almost 50 organisations and individuals representing Jewish groups, cultural and academic institutions, tourist bodies, and municipal offices published a joint letter earlier this week. They said the figurines have an ‘unequivocally anti-Semitic dimension.’ The images draw on a traditional antisemitic canard of the Jewish moneylender.

The authors of the joint letter say the city has received many letters of complaint from tourists indignant and upset by these objects in a city that ‘so painfully experienced the Holocaust and the loss of much of its population.’

The city cannot prohibit most businesses from selling the figurines. However, reports this week say contracts with tenants using city property – such as souvenir stalls on the market square – are to include clauses specifying that they cannot be sold.

The organisers of regular fairs in the city – where the figurines are often sold, especially at Easter – have already agreed to stop selling them.

Robert Piaskowski says that the main aim is to ‘start an important conversation about Polish-Jewish relations, about empathy and seeing [things] from another’s perspective.’

‘Only co-operation and dialogue will make it possible to change attitudes and withdraw from sale the offensive figurines,’ says the joint letter. The signatories add that they want to ‘promote and support traditional craftsmanship’ in other ways.

Many private retailers have already decided to stop selling these images. OBI, a German retailer, removed images of the so-called ‘Jew with a coin’ from its outlets in Poland in 2019 after an online campaign. However, some argue that the tradition shows a kind of nostalgia for Jews.

I am now questioning how appropriate it was to buy these figurines in Kraków, and whether I should keep them on my bookshelf.

Meanwhile, as I look at these figures in their tallitot, in my reflections this Friday evening I am reflecting too on a traditional Jewish prayer, based on Psalm 104: 1-2, said before saying the blessing on donning the prayer shawl or tallit:

Bless, O Lord, O my soul!
O Lord my God, how great you are.
You are robed in glory and majesty,
wrapping yourself in light as in a garment,
spreading forth the heavens like a curtain.

After saying the blessing and donning the tallit, a traditional prayer, based on Psalm 36: 8-11, is said:

How precious is your loving kindness, O Lord!
The children find refuge in the shadow of your wings.
They shall be filled with the rich plenty of your house.
You give them drink from your river of delights.
For with you is the fountain of life;
in your light, we see light.
Bestow your loving kindness upon those who know you,
and your righteousness on the upright in heart. 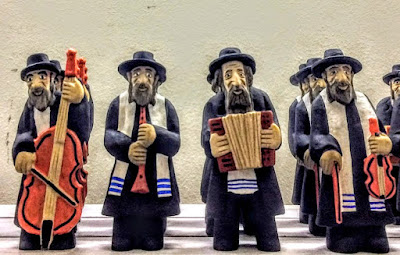