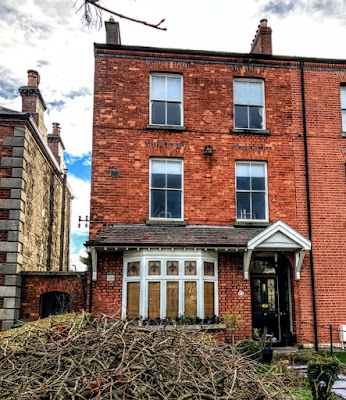 No 65 Kenilworth Square … home of Ludwig Hopf, a Jewish refugee from Nazi Germany, in 1939, is now on the market (Photograph: Patrick Comerford, 2021)

No 65 Kenilworth Square South in Rathgar, Dublin 6, is currently on the market through Sherry FitzGerald with an asking price of €1,350,000. It is described by the selling agents as a ‘handsome, distinctive, Victorian home.’ But it is also interesting because of its associations with Professor Ludwig Hopf, a Holocaust refugee, theoretical physicist, and friend of Albert Einstein, Erwin Schrödinger and Carl Jung.

From July to December 1939, this was the home of Professor Ludwig Hopf (1884-1939), a German-Jewish refugee and theoretical physicist who had been the first assistant to Albert Einstein and introduced Einstein to the psychoanalyst Carl Jung.

Walking around Kenilworth Square in Dublin in recent days, and working on photo-essay earlier this year on the architecture, families and history of the square, I was surprised to come across the story of the Ludwig Hopf.

Ludwig Hopf was a German Jewish refugee who escaped the Holocaust when he fled to Dublin in the weeks immediately before the outbreak of World War II and lived and died on Kenilworth Square.

Hopf was a theoretical physicist who made contributions to mathematics, special relativity, hydrodynamics, and aerodynamics. He was born in Nürnberg on 23 October 1884, the son of Elise (née Josephthal) and Hans Hopf.

The Hopf family were prominent hop merchants and an established Jewish family in Nürnberg. His great-grandfather, Löb Hopf, moved to Nürnberg from Upper Franconia in 1852, and there he was among the first Jews to acquire citizenship. His son, Stephan Hopf (1826-1893), Ludwig’s grandfather, held high public office and became ‘respectably wealthy’ as a hop wholesaler.

His father, Hans Hopf (1854-1918), was a prominent industrialist and business figure in Nürnberg and a city councillor. He inherited the family business interests and was a co-founder of the city’s public library and reading rooms in 1898. His large, private collection of Nürnberg memorabilia included many priceless items. During World War I, he was in charge of the city’s supply of food and potatoes.

Ludwig Hopf’s mother Elise (1865-1936) was the daughter of Gustav Josephthal who presided over both the Nürnberg lawyers and Nürnberg’s liberal Jewish community, the latter for four decades from 1869-1909. This family had lived in Franconia for generations.

Elise has been described as ‘without a doubt one of the most forceful personalities in the family and, indeed, among Bavarian Jewry of her time.’ She was a member of many committees and councils, a leading member of the women’s suffrage movement, instrumental in the development of welfare services in Nuremberg, particularly for single mothers, and was prominent in Jewish public life. She was a prolific letter writer and kept a diary until late in life.

She was remembered in 2016 with an exhibition at the Nuremberg State Archives on Elise Hopf and the bourgeois women movement in Nuremberg. Elise and Hans Hopf were buried together in the old Jewish cemetery in Nürnberg.

Ludwig Hopf was born in Nuremberg on 23 October 1884, the eldest son in the family. His two siblings, Ernst and Betty, remained connected with the hop business. However, Ludwig followed his scientific interests, although initially he was attracted by philosophy and music. He studied in Berlin and Paris before going to Munich in 1906 where Arnold Sommerfeld had begun to build one of the most important nurseries for theoretical physics. He received his PhD in Munich in 1909 on the topic of hydrodynamics.

Hopf became Einstein’s first assistant at the University of Zurich. There Hopf introduced Einstein to Carl Jung, and Einstein returned to Jung’s house several times over the years. Hopf also visited the Karl-Ferdinand University in Prague with Einstein.

Ludwig Hopf married Alice Goldschmidt in 1912. She had a similar, privileged middle-class background. Her father, Ferdinand Goldschmidt, was a physician in Nuremberg, and was also the author of a number of publications in the health sector. The relationship between son-in-law and parents-in-law was so good that they eventually moved in next door in Aachen.

Hopf was on the staff of the Hochschule from 1914 and had become one of its most popular teachers. During World War I, he contributed to the design of military aircraft. He became a professor in hydrodynamics and aerodynamics at the Rheinisch-Westfälische Technische Hochschule Aachen (RWTH Aachen University), a leading technical university in Germany, in the 1920s, and eventually became a professor.

Hopf was dismissed from his position as Professor of Applied Mathematics in Aachen on racist, anti-Semitic grounds soon after the Nazis seized power. The situation became even more perilous after Kristallnacht on the night of 9/10 November 1938. The SS efforts to arrest him and were thwarted by his son Arnold posing as his father.

Arnold Kopf, who had pretended to be his father, was arrested and was taken to Buchenwald. He was one of the 13,687 Jews imprisoned in Buchenwald between April and December 1938; of these, 10,012 were released by the end of 1938. Arnold was released in December 1938 when he obtained papers and he fled to Kenya.

Ludwig Kopf remained in Germany until 1939 and escaped the Nazi regime only at the last minute. In early February 1939, through the efforts of Sydney Goldstein in Cambridge and Peter Paul Ewald in Belfast, a research grant in Cambridge materialised. Ludwig and Alice Hopf left Germany for England with Liselore in late March 1939. Three weeks later, they moved into 86 Lovell Road in north-east Cambridge.

The relationship between Ludwig and his parents-in-law was so good that they later followed the couple to England and then to Ireland. 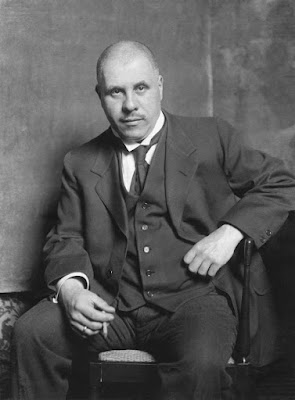 The Hopf family moved to Dublin on 17 July 1939 when Ludwig was offered a specially created professorship of mathematics at Trinity College Dublin. They moved to No 65 Kenilworth Square in Rathgar, close to the corner with Leicester Avenue.

He was soon in contact with other exiled academics, and guests at his home on Kenilworth Square included: the serologist Hans Sachs (1877-1945), who had first fled to Oxford and then lived at 3 Palmerston Villas, Dublin; Erwin Schrödinger (1887-1961), who was to take up a position in the Dublin Institute of Advanced Studies; a young Hans Reiss (1922-2020), who later completed his PhD at TCD and became Professor of German in Bristol; and John Hennig (1911-1986), a radical pacifist church historian and theologian who was then teaching at Belvedere College and whose wife Clare (Kläre) Meyer (1904-1990) was the daughter of the Jewish inventor and entrepreneur Felix Meyer (1875-1950) of Aachen.

Hopf regarded Dublin as expensive to live in and estimated that everything cost 50% more than in Cambridge. Writing to friends in Germany, he describes living in ‘a very beautiful, very famous and very expensive corner of Europe.’

However, shortly after taking up his post at TCD, Hopf became seriously ill with a previously undiagnosed thyroid failure. He died at 65 Kenilworth Square on the evening of 21 December 1939.

The speakers at his funeral were two fellow refugee Hans Sachs in German and Erwin Schrödinger in English. Schrödinger, who was then living in Clontarf, described Hopf as ‘a friend of the greatest geniuses of his time, indeed, he was one of them.’

He recalled how Hopf ‘soon began to love this country which had received him with such kindness, and to love a people whose mentality he felt to be akin to his own. He would have continued to call himself a happy man, had it pleased Providence not to take him away from us. His loss is irretrievable to all of us, and more so to his next of kin. In bidding him his last farewell, we are determined to preserve his memory and to remember his friendship with gratitude.’

After the death of their 18-year-old daughter Liselore (known in the family as Mädi) in Cork Street Hospital, Dublin, on 28 September 1942, his widow Alice returned to England with their sons. She died in London in 1975.

Through the persistence of Father Willie Walshe, a former missionary in Kenya who knew Arnold Hopf, his sister Kay McNamara and John Halligan, the grave of Ludwig Hopf in Mount Jerome was repaired in 2013.

At a small gathering described by Frank McNally in The Irish Times, the prayers at Hopf’s grave were said in English by Willie Walshe and in Hebrew by Tomi Reichental, a survivor of Bergen-Belsen. 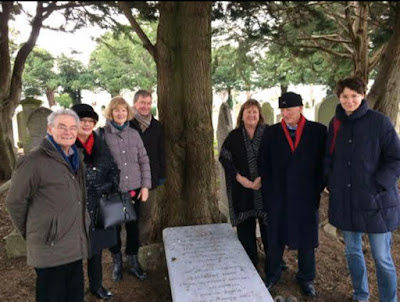 The gathering at Ludwig Hopf’s grave in Mount Jerome in 2013 (Photograph: Frank McNally)

Two doors away, No 67 Kenilworth Square was the home of Dr Ernst Scheyer (1890-1958), a Jewish refugee from Nazi Germany in the late 1930s. He was born in Oppeln in Upper Silesia in 1890, was decorated for his bravery in the Germany army in World War I, and later earned a PhD in Breslau (Wroclaw). Later, he was a practising lawyer and a respected member of the Jewish community in Liegnitz, Silesia. He married Marie Margareta (Mieze) Epstein, who was five years younger than him and was born in Breslau.

He was rounded up after Krtistallnacht, and spent almost a month in Sachsenhausen, a concentration camp near Berlin. He arrived in Dublin on 14 January 1939, and the Scheyer family made their home at 67 Kenilworth Square. He later taught German at Saint Columba’s College, Rathfarnham, and in Trinity College Dublin. When he died in 1958, he was buried in the Progressive Jewish community’s cemetery in Woodtown, Rathfarnham.

Nearby, No 60 Kenilworth Square was the home of Charles William Comerford (1877-1953), the only member of the Comerford family who was actually in the GPO in Dublin in Easter Week 1916.

His granddaughter, Angela Marks, believes Charles Comerford was in the GPO in O’Connell Street in 1916 and says family tradition tells of him crawling out along the street and swearing to leave Ireland.

The Comerford family left Ireland ca 1922, but the memory of the family home on Kenilworth Square continued in the name ‘Kenilworth’ which they gave to his house on Nore Road in Portishead, near Bristol. Adelaide Comerford died on 2 February 1953, and Charles Comerford died seven months later on 3 September 1953. Charles and Elizabeth Comerford had three daughters, Lillian, Nora and Kathleen, who were born while they were living at No 60. All three daughters became teachers in England.

After the Comerford family moved, No 60 Kenilworth Square was home to the same family for almost a century until it was placed on the market in 2016. 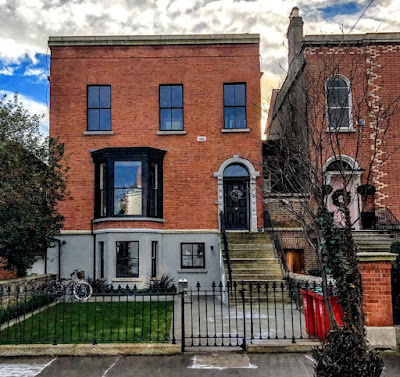 No 60 Kenilworth Square … the home of Charles William Comerford in 1916 … the only member of the Comerford family who was actually in the GPO in Easter Week 1916 (Photograph: Patrick Comerford, 2021)