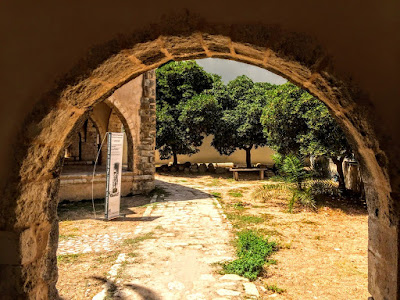 The Kara Musa Pasha Mosque – the former Saint Barbara’s Monastery – is one of the surviving treasures from Venetian and Ottoman Crete in the old town of Rethymnon (Photograph: Patrick Comerford)

My photographs this morning (1 July 2021) are from the former Saint Barbara’s Monastery, later the Kara Musa Pasha Mosque, Rethymnon, continuing a week of photographs from monasteries in Crete. 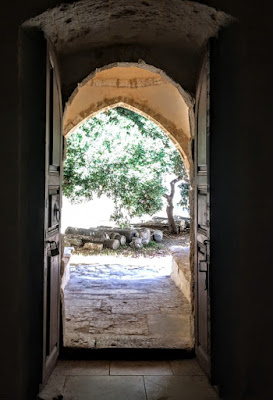 The Kara Musa Pasha Mosque stands on the site of a Venetian-era monastery dedicated to Saint Barbara (Photograph: Patrick Comerford)

The Kara Musa Pasha Mosque, at the corner of Arkadíou Street and Viktoras Ougo (Victor Hugo) Street, is one of the surviving treasures from Ottoman Crete in the old town of Rethymnon. But, while it is possible to see that this was once a mosque, it is difficult to make out any monastic remains or ruins.

The mosque, with its domes and part of its ruined minaret, stands close to Plateia Iróon or Heroes’ Square, which was once a chaotic traffic roundabout but is now a pleasant paved square that marks the east end of the old town.

For many years, the Kara Musa Pasha Mosque and its grounds have housed the Inspectorate of Byzantine Antiquities, but is generally closed to the public. In the past, I have sought to catalogue the surviving former mosques of Rethymnon, but I only managed to gain access to the Kara Musa Pasha Mosque once in 2014 for an exhibition, The Ghosts of Mediterranean, by the visual artist, Professor Marianna Strapatsakis.

The mosque was built on the site of a Venetian-era monastery dedicated to Saint Barbara, and was renamed after an Ottoman admiral who commanded the naval forces at the Turkish capture of Rethymnon in 1645.

The mosque takes its name from Kara Musa Pasha, who was born in Vikoča near Foča, now in Bosnia-Herzegovina. Sultan Ibrahim I named him as his Grand Vizier in 1647 after the execution his predecessor. But Kara Musa Pasha was then at sea, taking part in the Ottoman war to capture Crete. The sultan also appointed him the Grand Admiral of the Ottoman Navy, but the imperial seal for his promotion was still on its way to him when he died on 21 September 1647 in front of the castle of Iraklion.

After the Turks captured Rethymnon, Saint Barbara’s Monastery was turned into a mosque. The central building has a typical square floor plan with a mihrab pointing towards Mecca.

Beside the mosque and the stump of the minaret is a domed, three-vault mausoleum that may have been the tomb of the founder of the mosque. But it was partly destroyed during building work on Viktoras Ougo Street many years ago.

The mosque complex includes a vaulted fountain – with a tasteless modern metal tap and cement basin – a courtyard and decorated columns that once stood over Turkish graves but now lie flat on the sun-baked ground.

The lost monastery may have given its name to the Church of Aghia Barbara or Saint Barbara, which is celebrated in modern Cretan literature. This church is halfway along Aghia Barbara Street, just a hundred metres from the metropolis or cathedral in the centre of Rethymnon. The church was built in 1885 to replace and earlier Latin church of the same name, dating from at least 1613. 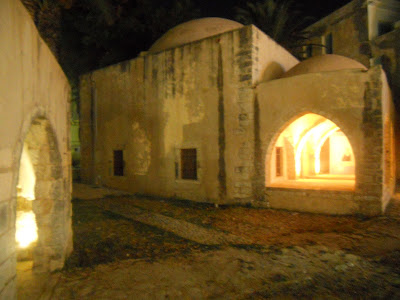 1 And after getting into a boat he crossed the water and came to his own town.

2 And just then some people were carrying a paralysed man lying on a bed. When Jesus saw their faith, he said to the paralytic, ‘Take heart, son; your sins are forgiven.’ 3 Then some of the scribes said to themselves, ‘This man is blaspheming.’ 4 But Jesus, perceiving their thoughts, said, ‘Why do you think evil in your hearts? 5 For which is easier, to say, “Your sins are forgiven”, or to say, “Stand up and walk”? 6 But so that you may know that the Son of Man has authority on earth to forgive sins’ – he then said to the paralytic – ‘Stand up, take your bed and go to your home.’ 7 And he stood up and went to his home. 8 When the crowds saw it, they were filled with awe, and they glorified God, who had given such authority to human beings. 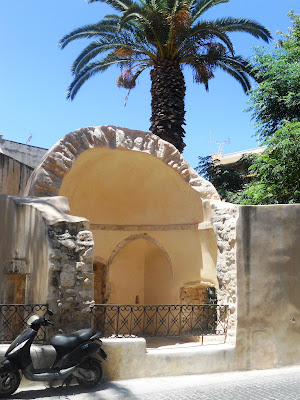 The mausoleum of the founder of the mosque was partly destroyed during building work some years ago (Photograph: Patrick Comerford)

The Prayer in the USPG Prayer Diary today (1 July 2021) invites us to pray:

Lord, we pray for those amongst us facing personal challenges. May they find strength and comfort in You. 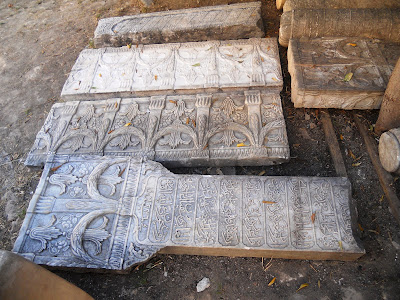