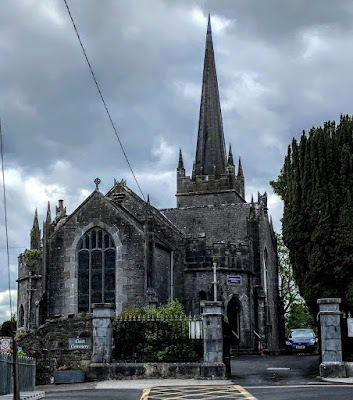 Saint Colman’s Church in Gort, Co Galway, served as the ‘de facto’ cathedral of the Diocese of Kilmacduagh for much of the 19th century (Photograph: Patrick Comerford, 2021) 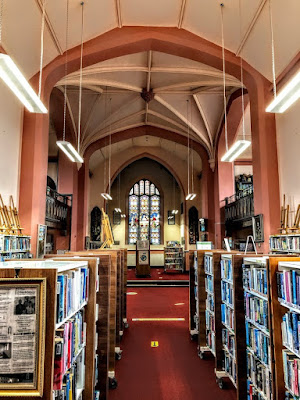 Inside Saint Colman’s Church in Gort stands on a site donated by the Prendergast family and their descendant, Lord Gort (Photograph: Patrick Comerford, 2021)

Since my appointment as Precentor of Limerick, Killaloe and Clonfert in 2017, I have tried to visit all the cathedrals and former cathedrals in the diocese. This morning (14 July 2021), my photographs are from Saint Colman’s Church in Gort, Co Galway, served as the ‘de facto’ cathedral of the Diocese of Kilmacduagh for much of the 19th century.

Gort is a pretty market town between Galway City and Ennis, and has been designated a heritage town, with its traditional street-plan and shopfronts. It is ideally located for exploring the Burren, south Galway and north Clare. Sites nearby include Coole Park, once the home of Lady Gregory and cradle of the Irish literary revival; Thoor Ballylee, once the home of WB Yeats; as well as Kilmacduagh Cathedral, the monastic site and the round tower.

Gort (Gort Inse Guaire or An Gort) is just north of the border with Co Clare on the Galway-Limerick road. It is in the former territory of Uí Fiachrach Aidhne also known as Maigh Aidhne (‘the plain of Aidhne’), which was coextensive with the Diocese of Kilmacduagh.

The name means the meadow on the island of Guaire, referring to Guaire Aidne mac Colmáin, the sixth century King of Connacht and patron of Saint Colman MacDuagh of Kilmacduagh.

During the Middle Ages the chiefs of Cenél Áeda na hEchtge, the O’Shaughnessys (Ó Seachnasaigh) clan, had their principal stronghold in Gort, on a site that later became a cavalry barracks. The O’Shaughnessy lands were confiscated at the end of the 17th century, and granted to Sir Thomas Prendergast (1660-1709).

His son, Sir Thomas Prendergast (1702-1760), MP for Clonmel, presented 294 acres in the Gort area to the Very Revd Joseph Bradshaw, Dean of Kilmacduagh, in 1738. Two years later, the first Church of Ireland parish church in the town, with a wooden spire, was built in 1740.

Prendergast also donated a house and farm to the Very Revd William Nethercote, Dean of Kilmacduagh, in 1749, along with 53 acres of land near Gort known as Horse Park.

The sites for the two parish churches in Gort, the Church of Ireland and Roman Catholic parish churches in the town, both named Saint Colman’s, were donated by Prendergast’s son, John Prendergast-Smyth (1742-1817), 1st Lord Gort. Before being made a peer in 1810, Lord Gort was MP for Carlow (1776-1783) and Limerick (1785-1798); his paternal grandfather was Thomas Smyth, Bishop of Limerick, and his uncles included Arthur Smyth, Archbishop of Dublin.

The Deanery House on Church Street was built as the rectory in 1812, and a new Church of Ireland parish church, Saint Colman’s, was built in 1814.

Saint Colman’s Church in Gort was built with a loan of £1,400 by the Board of First Fruits, and it was repaired in 1828 with a further loan of £600. Queen Street was laid out in Gort after this church was built, to allow it to be viewed to its best advantage from the east.

Fine craftsmanship can be seen throughout this building, particularly in the stone carving at the pinnacles, the crenellations and string courses.

This church has a two-bay nave, a three-stage tower at the west gable, full-height transepts, and a lower chancel at the east end. There is a crenellated canted porch at the north re-entrant corner of the chancel and the nave, and a similar annex at the south.

There is a pointed arch stained-glass three-light window in the east gable with a cut limestone block-and-start surround. This remaining stained-glass window is the work of Sibthorpe of Dublin and was a gift from a Mrs Lahiff.

There are pointed arch windows in the rest of the church, with replacement windows. The pointed arch door openings at the porch and the south side of the tower have chamfered limestone block-and-start surrounds. There are timber battened doors with cut limestone steps.

The church has pitched slate roofs with cut-stone copings, and a tower with a spire and crenellations. There are crenellations also at the porch and annex, cut-stone finials and cross finials at the gables, and corner pinnacles.

The dressed walls have stepped corner buttresses, and there are cut-stone string courses on the tower. The top stage of the tower has pointed arch louvered openings.

Gregory was also an advocate of the cause of Greece and sympathetic to the Philhellenes. In a speech deliverd on 18 March 1864, he called for the restoration of the Ionian Islands and Crete to the modern Greek state.

‘If there was one spot,’ he said, ‘in all Europe where the name of England was cherished before, it was in these Ionian Islands. Now there are few places where it is regarded with greater distrust and dislike. Had these islands belonged to us, and had we ceded them, or parted company with them in any way, it would have been an evil thing to destroy their fortifications; but we are actually blowing up now that which never belonged to us, and against the destruction of which the owners protest.

‘These islands were always independent, even when under our protection. The rights of the lonians to their fortresses were recognised in the sixth article of the Congress of Vienna.

‘When Lord Malmesbury made a proposal on 16 April 1863 that these islands should be neutralised, and their fortresses destroyed, Lord Russell reprimanded him, saying that the Ionian Islands were independent states, and that if they were united to Greece it would be for them to decide whether the fortresses of Corfu were to be kept up.

‘They have kept up these fortresses by heavy taxation since 1825, though I am quite ready to admit that they have not paid up the full amount of necessary contributions. The lonians were altogether ignorant of the terms of the treaty of 1863, by which their fortresses were to be destroyed. The whole affair arose from Austrian misgivings lest these islands should be seized by the Italians, and used as a basis of hostile operations; but, if so, let Austria take on herself the discredit of this act. Why should we be execrated, and our good faith impugned, to allay Austria’s apprehensions.’

Gregory spoke of ‘the lighting up of hope in the breasts of the oppressed at the deliverance of their brethren.’

His widow, the former Augusta Persse (1852-1932), is remembered as Lady Gregory, a key figure in the Irish literary revival, a founder of the Abbey Theatre, and the patron of William Butler Yeats, who often went to church in Gort.

Sir William Gregory lost much of his inherited fortune in gambling on the racetrack. It is no surprise, then, that he gives his name to the inspector in Arthur Conan Doyle’s Sherlock Holmes novel Silver Blaze (1892). The story is based on the disappearance of a racehorse on the eve of a major race. Gregory was at Harrow with Sir Robert Peel and Anthony Trollope, and he may have been the model for Phineas Finn in Trollope’s Palliser novels.

Saint Colman’s Church is set in its own grounds, and the graveyard on the south side of the church, which is still in use, incorporates the former orchard of a neighbouring convent.

The church closed in 1970 and was handed over on behalf of the diocese to the people of Gort on 5 April 1972, when Bishop Edwin Owen of Killaloe presented the keys to Bishop Michael Browne of Galway.

Since then, the church has become the Town Library in Gort. 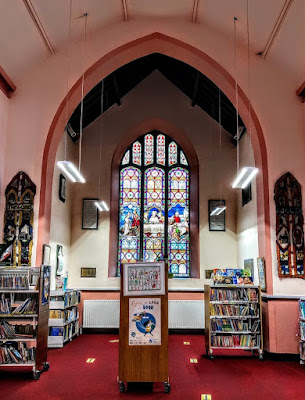 25 At that time Jesus said, ‘I thank you, Father, Lord of heaven and earth, because you have hidden these things from the wise and the intelligent and have revealed them to infants; 26 yes, Father, for such was your gracious will. 27 All things have been handed over to me by my Father; and no one knows the Son except the Father, and no one knows the Father except the Son and anyone to whom the Son chooses to reveal him.’ 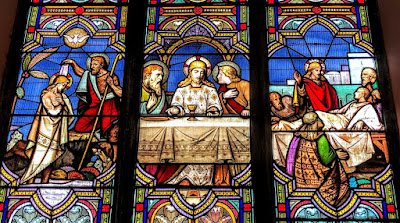 The East Window is the work of Sibthorpe of Dublin (Photograph: Patrick Comerford, 2021)

Let us pray for youth leaders across the world church. May they feel supported by their fellow Christians and valued as contributors to the life of the Church. 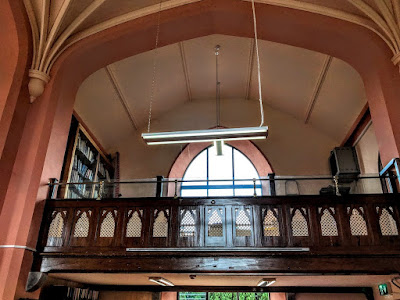 The gallery in the north transept was once allocated to the Gregory family of Coole Park (Photograph: Patrick Comerford, 2021) 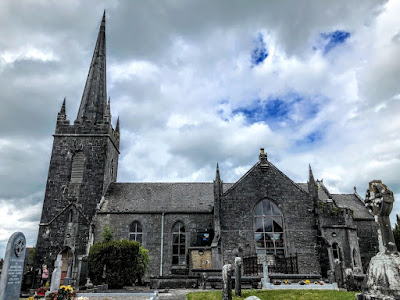 Saint Colman’s Church is set in its own grounds and is now the town library in Gort (Photograph: Patrick Comerford, 2021)