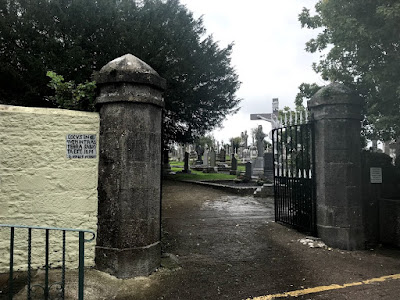 The entrance to the graveyard in Emly, Co Tipperary … the site of the former Cathedral of Alibeus, dismantled in 1877 (Photograph: Patrick Comerford) 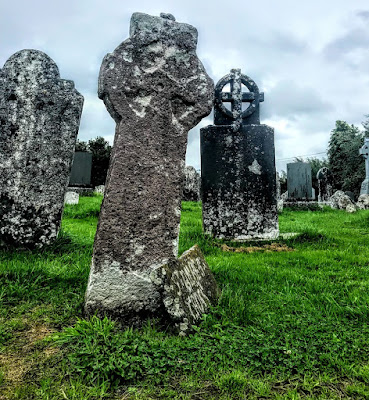 Saint Ailbe’s Cross in the graveyard at the site of Emly Cathedral (Photograph: Patrick Comerford)

Since my appointment as Precentor of Limerick, Killaloe and Clonfert in 2017, I have tried to visit all the cathedrals and former cathedrals in the diocese. This morning (13 July 2021), my photographs are from the former Cathedral of Saint Alibeus in Emly, Co Tipperary.

The small village of Emly is 14 km west of Tipperary town. Local lore claims Emly was recorded by Ptolemy under the name of Imlagh as one of the three principal towns of Ireland.

Although it is a small town or village today, Emly once gave its name to a separate diocese. In the Roman Catholic Church, it has been subsumed into the Diocese of Cashel, while in the Church of Ireland Emly has been part of the Diocese of Limerick and Killaloe since 1976.

Although there is no cathedral in Emly today, there is the site of the former Church of Ireland cathedral, and an interesting Roman Catholic parish church, designed in the Gothic Revival style by Ashlin and Coleman.

Some accounts say Munster was entrusted to Saint Ailbe by Saint Patrick, so that he is called a ‘second Patrick and patron of Munster’ (secundus Patricius et patronus Mumenie). Many sources say he died in the year 527, and after his death, it is said, there was a succession of Abbots of Emly, some of whom were consecrated bishop.

There is very little to see of the former cathedral today, although rising ground in the old graveyard beside Canon Power’s church marks the site of the cathedral.

A large sandstone cross in the churchyard with a rough marking is known as ‘Saint Ailbe’s Cross’ and is said to mark the saint’s grave. A well, called Saint Ailbe’s Well, is completely encased by a concrete cover and a manhole, but was once the focus of a local ‘pattern’ on 12 September. 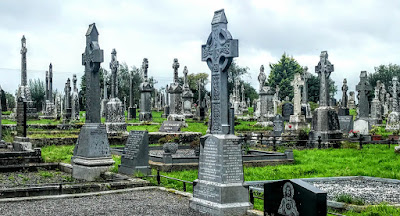 The old graveyard in Emly is on the site of the former cathedral (Photograph: Patrick Comerford)

20 Then he began to reproach the cities in which most of his deeds of power had been done, because they did not repent. 21 ‘Woe to you, Chorazin! Woe to you, Bethsaida! For if the deeds of power done in you had been done in Tyre and Sidon, they would have repented long ago in sackcloth and ashes. 22 But I tell you, on the day of judgement it will be more tolerable for Tyre and Sidon than for you. 23 And you, Capernaum,

will you be exalted to heaven?
No, you will be brought down to Hades.

For if the deeds of power done in you had been done in Sodom, it would have remained until this day. 24 But I tell you that on the day of judgement it will be more tolerable for the land of Sodom than for you.’ 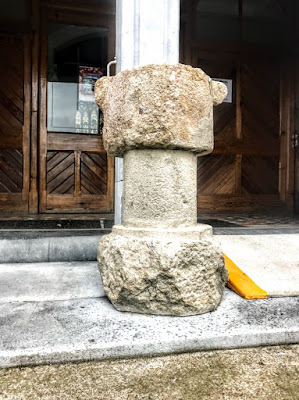 Let us pray for the Diocese of Egypt as they navigate the complex nature of being a ‘double-minority’ church. We pray that their youth ministry encourages young people to develop relationships with each other and with God. 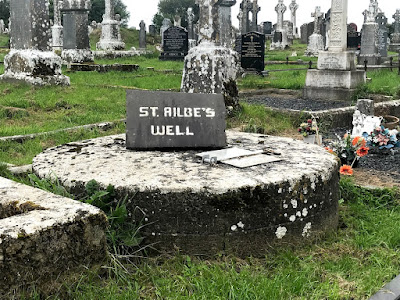 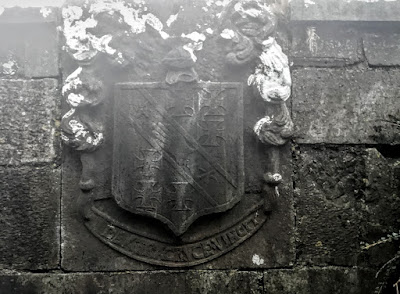 The fragments of the O’Hurley monument, once in the cathedral, are set in the boundary wall separating the parish church and the graveyard (Photographs: Patrick Comerford)