How Giotto changed western
art with his frescoes in
the Scrovegni Chapel, Padua 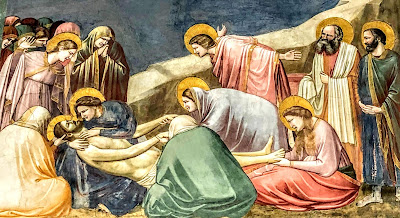 In Giotto’s Scrovegni Chapel in Padua … the Deposition of Christ from the Cross (Photograph: Patrick Comerford, 2021)

The Scrovegni Chapel in Padua is one of the most important, self-contained works of art in Western Europe. Its interior frescoes form one complete cycle, and this is the work of the Italian painter and architect Giotto di Bondone (ca 1267-1337), known generally as Giotto.

Giotto has been described as ‘the most sovereign master of painting in his time.’ He was born in Florence in the Late Middle Ages, and worked in the Gothic and early Renaissance period. His work marks a decisive break with the Byzantine style, prevalent at the time, and he initiated the Western art of painting as we know it today.

One morning last week, I took the train from Venice to Padua, primarily to see Giotto’s decoration of the Scrovegni Chapel in Padua, which is undoubtedly his masterpiece. He completed his decoration of the chapel between 1303 and 1305 with a fresco cycle depicting the Life of the Virgin and the Life of Christ. This work is regarded as one of the supreme masterpieces of the Early Renaissance. In Giotto’s Scrovegni Chapel in Padua … the Raising of Lazarus from the Dead (Photograph: Patrick Comerford, 2021)

The Scrovegni Chapel or Cappella degli Scrovegni is close to the Augustinian monastery or Monastero degli Eremitani in Padua, and both the chapel and the monastery are now part of the complex of the Museo Civico of Padua.

It is said the affluent banker Enrico Scrovegni of Padua commissioned the Scrovegni Chapel in 1303, hoping this deed would spare his dead father, Reginaldo, a usurer, from the eternal damnation that had been wished on him by Dante in his Inferno.

There are strict limits on the number of visitors allowed inside the chapel at any one time, and I had to spend 15 minutes before my visit in a decontamination chamber, during which a video presentation told the story of the chapel and Giotto’s frescoes.

Once inside the chapel, my visit was also limited to 15 minutes. 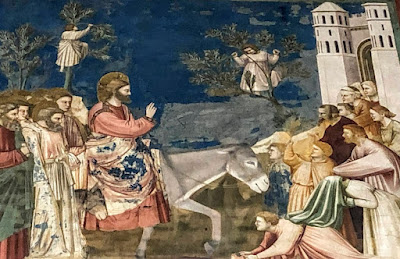 The church was dedicated to Santa Maria della Carità on the Feast of the Annunciation, 25 March 1303, and consecrated on 25 March 1305. Much of Giotto’s fresco cycle focuses on the life of the Virgin Mary and celebrates her role in the story salvation.

The chapel is also known as the Arena Chapel because it was built on land bought by Scrovegni beside the site of the Roman arena in Padua in 1300. There he built his luxurious palace, and built the chapel beside it as his family’s private oratory and as a funerary monument for himself and his wife.

Scrovegni commissioned Giotto to decorate the chapel. Giotto had previously worked for the Franciscans in Assisi and Rimini, and was then working on the Basilica of Saint Anthony in Padua.

Giotto was about 36 or 38 when he worked on Scrovegni’s chapel with a team of about 40 collaborators. They calculated that 625 work days (giornati) were necessary to paint the chapel. A ‘work day’ meant that portion of each fresco that could be painted before the plaster dried and was no longer ‘fresh’ (fresco in Italian).

In January 1305, the Augustinian friars from the nearby Church of the Eremitani complained to the bishop that Scrovegni had not respected an original agreement and was transforming his oratory into a church with a bell tower, producing unfair competition with their church.

Perhaps because of this complaint, the apse and the wide transept of the chapel were demolished. Both can be seen on a model of the church in the fresco of the Last Judgment. The apse was the section where Scrovegni planned to have his tomb in the apse, and Enrico and his wife, Jacopina d'Este, were buried in the significantly reduced apse.

An unknown artist known as ‘The Master of the Scrovegni Choir’ worked at the chapel about 20 years after Giotto's work was completed. His work in the chapel includes two episodes from the Passion – the prayer in the Garden of Gethsemane and the Flagellation of Christ – and six monumental scenes on the side walls of the chancel that depict the last period of the Virgin Mary’s earthly life. 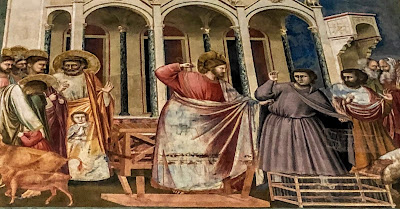 In Giotto’s Scrovegni Chapel in Padua … the Cleansing of the Temple (Photograph: Patrick Comerford, 2021)

Did Dante inspire Giotto? A posthumous portrait of Dante is included in the Paradise section of the frescoes.

Did Giotto follow a theological programme based on the work of St Thomas Aquinas or is his work wholly Augustinian?

Did Scrovegni insist that Giotto excluded any references to usury in the frescoes? Dante condemns Scrovegni’s father, Reginaldo, as a usurer in Canto 17 of the Inferno, but this was a few years after Giotto completed the chapel.

Many scholars also point out how Giotto has made a number of theological mistakes. For example, they say he placed Hope after Charity in the Virtues series, and that he did not include Avarice in the Vices series, perhaps because of the usual representation of Enrico Scrovegni as a usurer. However, Avarice, far from being absent in Giotto's cycle, is portrayed with Envy, which is placed facing the virtue of Charity, to indicate that Charity is the exact opposite of Envy. Charity crushes Envy’s money bag under her feet, while on the opposite wall red flames burn under Envy’s feet.

Giotto covered the whole surface of the chapel, including the walls and the ceiling, with frescoes. His cycle is organised along four tiers, each depicting episodes in Sacred History. Each tier is divided into frames, each forming a scene. The chapel is asymmetrical in shape, with six windows on the longer south wall, and this shape determined the layout of the decoration.

Giotto’s cycle recounts the story of salvation, beginning high up on the lunette of the triumphal arch, with God the Father instructing the Archangel Gabriel to make the Annunciation to the Virgin Mary.

The stories of Christ are placed on the middle tier of the south and north walls. The scene of Judas receiving the money to betray Christ is on the triumphal arch.

The lower tier of the south and north walls shows the Passion and Resurrection.

The last frame on the north wall shows the Pentecost.

The fourth tier begins at ground level with the monochromes of the Vices (north wall) and the Virtues (south wall). 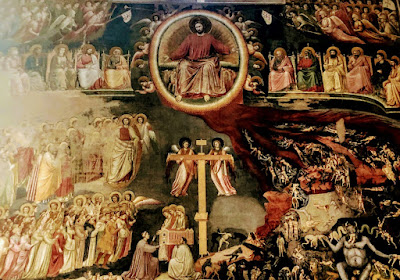 The vault presents the eighth day, the time of eternity, God’s time, with eight planets – the tondos which enclose the seven great Biblical prophets along with Saint John the Baptist – and two suns that show God and the Madonna and Child; while the blue sky is studded with eight-point stars symbolising infinity.

The bottom tiers of the side walls feature 14 personifications in grisaille, representing single figures of Vices on the north wall and Virtues on the south wall. Each virtue and vice is embedded within a mirror-like marble frame, and they also represent the seventh day, the time between Christ’s birth and the Last Judgment.

The chapel was originally connected with the Scrovegni palace, which was built on what remained of the foundations of the elliptical ancient Roman arena. The palace was demolished in 1827 and its materials were used to build two condominiums on the site. The chapel was bought by the City of Padua in 1881, the condominiums were demolished, and work began on restoring the chapel.

A full-scale restoration of Giotto’s frescoes began in June 2001 under the direction of Giuseppe Basile. The chapel reopened to the public in its original splendour in March 2002. Earlier this year (2021), the chapel was declared part of the Unesco World Heritage Site of the 14th-century fresco cycles that includes eight buildings in the city centre of Padua.

For more images of the Scrovegni Chapel, visit HERE