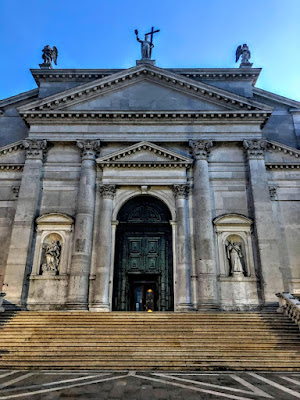 This morning, we enter the last week of Ordinary Time. Today is the Feast of Christ the King or the Sunday before Advent. Later this morning (21 November 2021), I hope to preach at Morning Prayer in Saint Mary’s Church, Askeaton, and to preside and preach at the Parish Eucharist in Sant Brendan’s Church, Kilnaughtin (Tarbert), Co Kerry.

As part of my reflections and this prayer diary this week, I look at seven more churches I visited in Venice earlier this month. This theme begins today (21 November 2021) with photographs from Il Redentore, Palladio’s great church on the island of Giudecca. 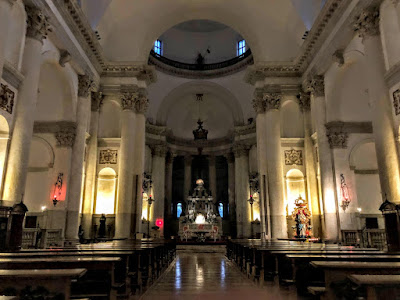 Inside the Chiesa del Santissimo Redentore or Church of the Most Holy Redeemer, known as Il Redentore (Photograph: Patrick Comerford, 2021)

The Chiesa del Santissimo Redentore (Church of the Most Holy Redeemer), known as Il Redentore, was designed by Italian Renaissance architect Andrea Palladio (1508-1580). It stands on the waterfront of the Canale della Giudecca, and dominates the skyline of the island of Giudecca. Canaletto painted the church many times, and inside there is a rich collection paintings, including works by Tintoretto, Paolo Veronese and Francesco Bassano.

The Senate of Venice commissioned Andrea Palladio to design the church. The Senate wanted a church on a square plan, but Palladio designed a single nave church with three chapels on either side

The prominent position of the church on the Canale della Giudecca provided Palladio with an opportunity to design a façade inspired by the Pantheon of Rome and enhanced by being placed on a wide plinth.

Palladio required 15 steps to reach the entrance, a direct reference to the Temple in Jerusalem. Palladio’s own hope was that ‘the ascent (of the faithful) will be gradual, so that the climbing will bring more devotion.’

The cornerstone was laid by the Patriarch of Venice, Giovanni Trevisano, on 3 May 1577 and the church was consecrated in 1592. At the urging of Pope Gregory XIII, the church was put in the charge of the Order of Friars Minor Capuchin, and a small number of Friars reside in the monastery attached to the church.

Every year, the doge and senators walked across a specially built pontoon bridge from the Zattere to Giudecca to attend Mass in the church. The Festa del Redentore remains a major festival in Venice, on the third Sunday in July. A huge firework display on the previous evening is followed by a mass procession across the pontoon bridge.

Il Redentore has one of the most prominent sites of any of Palladio’s buildings, and is one of the pinnacles of his career. It is a large, white building with a dome crowned by a statue of the Redeemer.

A central triangular pediment on the façade stands above a larger, lower one. Palladio applied rigorous geometric proportions to his façades and this is reflected in Il Redentore. The overall height is four-fifths that of its overall width, while the width of the central portion is five-sixths of its height.

It has been suggested that there are some oriental influences in the exterior, particularly the two campanili that resemble minarets.

As a pilgrimage church, the building was expected to have a long nave. This was a challenge for Palladio, and the result is an eclectic building, in which the white stucco and grey stone interior combines the nave with a domed crossing in spaces that are clearly articulated yet unified. An uninterrupted Corinthian order makes its way around the entire interior.

The sacristy has a series of wax heads of Franciscans made in 1710. 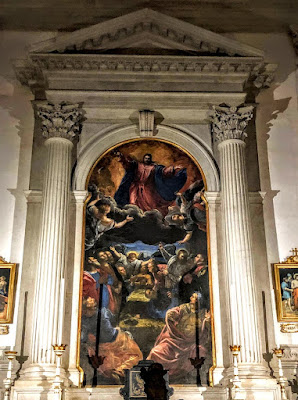 The Ascension of Christ, by the workshop of Tintoretto (Photograph: Patrick Comerford, 2021)

33 Then Pilate entered the headquarters again, summoned Jesus, and asked him, ‘Are you the King of the Jews?’ 34 Jesus answered, ‘Do you ask this on your own, or did others tell you about me?’ 35 Pilate replied, ‘I am not a Jew, am I? Your own nation and the chief priests have handed you over to me. What have you done?’ 36 Jesus answered, ‘My kingdom is not from this world. If my kingdom were from this world, my followers would be fighting to keep me from being handed over to the Jews. But as it is, my kingdom is not from here.’ 37 Pilate asked him, ‘So you are a king?’ Jesus answered, ‘You say that I am a king. For this I was born, and for this I came into the world, to testify to the truth. Everyone who belongs to the truth listens to my voice.’ 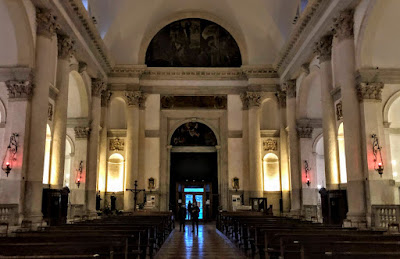 Inside Il Redentore, with a glimpse out to the Canale della Giudecca (Photograph: Patrick Comerford, 2021)

The Prayer in the USPG Prayer Diary today (21 November 2021, Christ the King) invites us to pray:

‘The Lord is King, he is robed in majesty.’
King of kings,
We wonder in Your majesty.
May we worship You
For evermore. 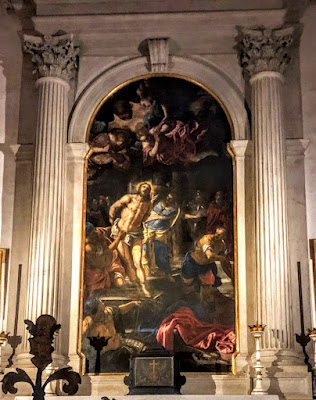 The Scourging of Christ, by the workshop of Tintoretto (Photograph: Patrick Comerford, 2021) 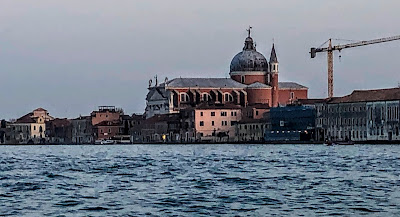 Il Redentore seen on the crossing of the Canale della Giudecca from the Zattere … the two campanili resemble minarets (Photograph: Patrick Comerford, 2021) 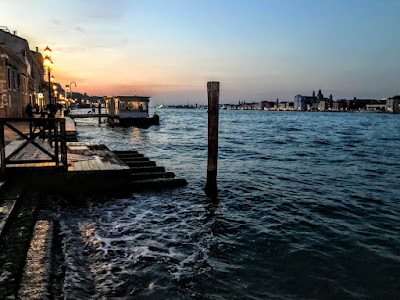 The waterfront below the steps of Il Redentore (Photograph: Patrick Comerford)