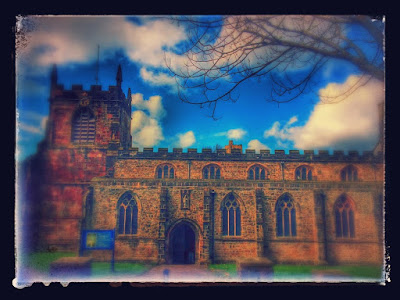 This looks like a busy day, with meetings later today of both the Church of Ireland Inter-Faith Working Group and the Commission for Christian Unity and Dialogue, followed by a meeting of the Standing Committee tomorrow.

My theme on this prayer diary for the rest of this week is cathedrals and churches in Wales. As part of my reflections and this prayer diary this morning, my photographs today (15 November 2021) are of Saint Deiniol’s Cathedral, Bangor. 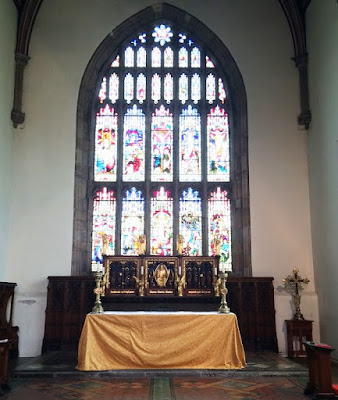 Saint Deiniol’s Cathedral has been a place of worship since the sixth century. The site of the cathedral was originally the home of Saint Deiniol’s monastery, built around 525 on land given to him by the King of Gwynedd, Maelgwn Gwynedd. Saint Deiniol is said to have been consecrated a bishop by Saint David, making him the first Bishop of Bangor. However, the monastery was sacked in 634 and again in 1073, so that nothing remains of the original building.

The Synod of Westminster in 1102 took measures to restore Bangor Cathedral, but the earliest part of the present building was built when Bishop David was bishop (1120-1139). He received financial support from the King of Gwynedd, Gruffudd ap Cynan, who was buried by the high altar when he died in 1137. This 12th century cathedral was cruciform in shape in the Norman style, and about 130 ft in length. King Gruffudd’s son, Owain Gwynedd, was also buried here, as was his brother, Cadwaladr.

The building as we see it today is the result of extensive work carried out by Sir George Gilbert Scott, beginning in 1868. Scott’s design originally called for a high central tower and spire. However, this was never completed after cracks appeared, raising fears about the subsidence of the foundations, and the tower was left as a low structure.

The stump of Scott’s central tower was finished off in 1966-1967, with battlements, a pyramidical cap and a tall weather cock. Major restoration of the outside stonework and roofs began in 1987 and continues.

The Bangor Pontifical survived the ravages of war, and although it was lost after Owain Glyndŵr’s rebellion in 1402, it was returned to Bangor Cathedral by Bishop Ednam in 1485. After the injunctions in the reign of King Edward VI ordering the destruction of Roman service books, the Pontifical may have found a safe and private hiding place thanks to Bishop Rowland Meyrick (1559–1566), until it was presented to the cathedral by Bishop Humphrey Humphreys in 1701. Bishop Humphreys was a patron of Welsh literature, genealogical research and of the then newly-formed Society for Promoting Christian Knowledge (SPCK).

During World War II, the Bangor Pontifical was moved for safekeeping with other treasures to the tunnels beneath the National Library of Wales at Aberystwyth. It was finally returned in 1946, and is now kept in the Library of the University of Wales Bangor.

The Bible Garden in the grounds of the cathedral is said to be planted with an example of every plant mentioned in the Bible.

One of the major pieces of work in the cathedral is the ‘Mostyn Christ,’ a figure of the Pensive Christ carved in oak and thought to date from ca 1450. It depicts Christ before his crucifixion, chained seated on a rock and wearing the crown of thorns. The Mostyn Christ reflects the meaning of the Passion through the intense depiction of human suffering and the symbolic inclusion of a skull at the feet of Christ.

The Mostyn Christ is on loan to the cathedral from the Mostyn Estates, which manages the interests of the Mostyn family across North Wales and elsewhere, including commercial, residential and agricultural holdings in Llandudno and agricultural estates in Rhewl and Tremostyn, Flintshire.

This wooden carving is an iconic religious representation surviving from 15th century Wales and its origins have been the subject of debate, with suggestions including Maenan Abbey, Gwydir Chapel, Rhuddlan Friary and the chapel in the home of the Catholic Pue family in Penrhyn. It is possible that it was rescued by the Mostyn family sometime during the Reformation. By the early 19th century, it was owned by the Mostyn family who lived at Gloddaith Hall, where the early chapel was decorated throughout with Catholic iconography. The branch of the Mostyn family that lived at Talacre and Basingwerk was renowned for its allegiance to the ‘Old Faith’.

The Bishop of Bangor, the Right Revd Andrew John, was consecrated in 2008 and enthroned in 2009. The Very Revd Kathy Louise Jones, who was Dean of Bangor from 2016, retired earlier this year (27 June 2021) to take up a new role of Family Support Leader to Katharine House Hospice in Stafford. 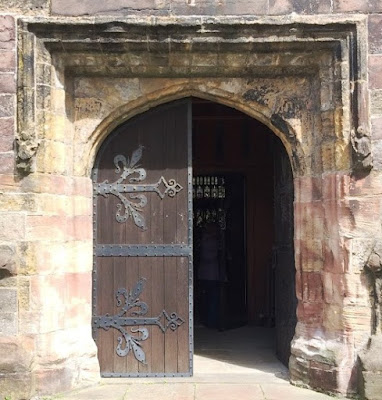 A Latin inscription over the tower doorway records that Bishop Skevington built the tower in 1532 (Photograph: Patrick Comerford) 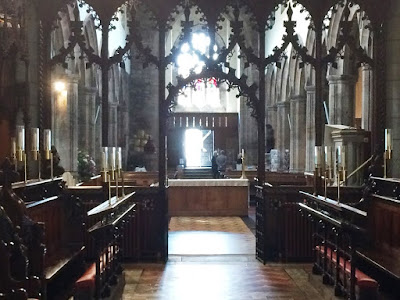 The Prayer in the USPG Prayer Diary today (15 November 2021) invites us to pray:

We pray for Saint Hugh’s High School in the Diocese of Jamaica and the Cayman Islands. May students and staff at the school feel transformed by God’s love for them. 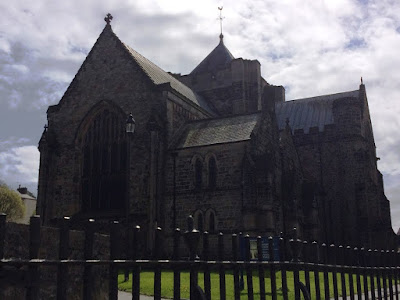 The Mostyn Christ, dating from 1450, is one of the principal treasures in Bangor Cathedral (Photograph: Patrick Comerford)